There's never a dull month in the wonderful world of Disney (NYSE:DIS) investing, but May looks to be particularly important. From an important earnings report to new attraction openings to big movie debuts, the month ahead is going to give the media giant's stock plenty of opportunities to move.

Let's go over a few of the upcoming dates that investors will want to keep an eye on. Disney has a lot of stuff going on in May. 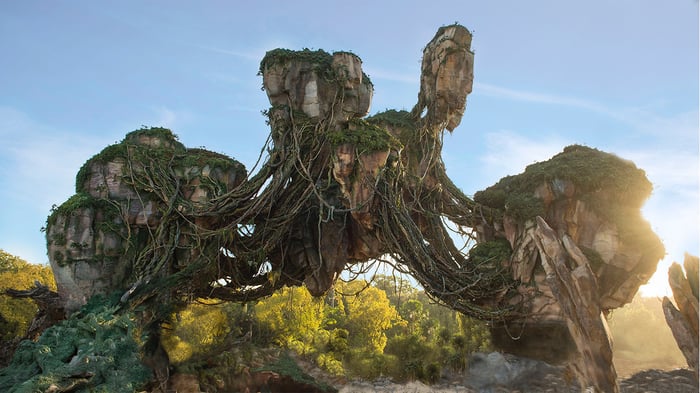 Pandora -- The World of Avatar officially opens on May 27. Image source: Disney.

Marvel has proved to be a hit factory for Disney, and one of the more surprising blockbusters was 2014's Guardians of the Galaxy. It was that year's third highest grossing film in North America, barely losing to American Sniper and The Hunger Games: Mockingjay: Part 1 for top honors.

The previously obscure Marvel franchise paid off for Disney, and now it's going back to that well this weekend with Guardians of the Galaxy: Vol. 2. Expectations will be high this time around, something that obviously wasn't the case when it was the sleeper hit of 2014.

A successful showing is also important for Disney's theme-park business. Later this month, Disney's California Adventure is introducing Guardians of the Galaxy -- Mission BREAKOUT!, a Marvel-themed makeover of the iconic Twilight Zone Tower of Terror thrill ride. There's also growing chatter about a Guardians of the Galaxy attraction opening in Disney World's Epcot, and another strong performance at the local multiplex will make it that much more likely to happen.

Disney's fiscal second quarter ended in March, and next week we'll learn how it played out. It should be more of the same. Revenue should continue to grow despite cord-cutters that are eating away at subscriber tallies for its cable properties, something that was practically confirmed with reports late last week of a wave of layoffs at ESPN. The timing of the seasonally potent Easter holiday -- moving from March last year to April this time around -- should also weigh on the financials.

Analysts see revenue and earnings per share growing just shy of 4% since the year earlier. Disney has typically landed ahead of the pros under CEO Bob Iger's tenure, but every quarter is a test.

There's more at stake this time. The fourth installment, Pirates of the Caribbean: On Stranger Tides, became the first movie in the series that failed to crack $300 million in domestic ticket sales. It probably doesn't help that the movies have grown progressively worse in quality, at least according to movie critics. The Rotten Tomatoes scores have fallen with every installment, going from a 79% approval rating for the 2003 original all the way down to 32% for the fourth movie in the series that came out in 2011. A strong showing for Pirates of the Caribbean: Dead Men Tell No Tales in terms of both box office receipts and critical acclaim could breathe new life into the series.

They say that Memorial Day weekend is the start of the holiday travel season, and Disney's making sure it gets noticed with the opening of Pandora -- The World of Avatar at Disney's Animal Kingdom in Florida. The ambitious Disney World expansion will feature two unique rides and several richly themed features that bring the Avatar movie to life.

Disney began offering media and travel bloggers a sneak peek at the expansion over the weekend, so there's little doubt that it will be ready on time. The success of Pandora -- The World of Avatar will dictate if Disney's theme park attendance bounces back after a rough 2016.