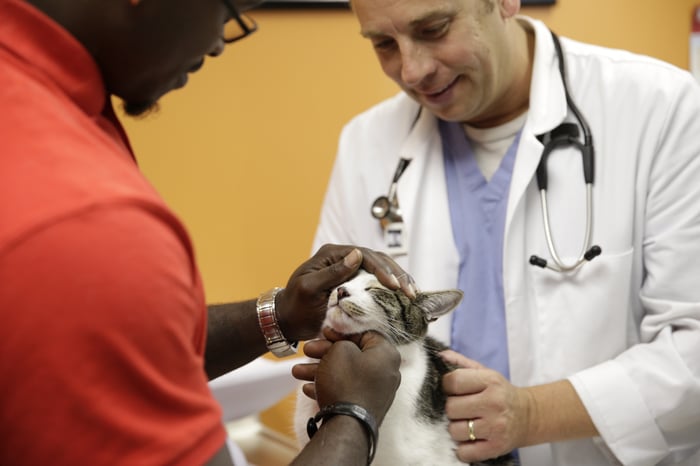 There's always a worry that new machine sales are just replacing old ones, which benefits short-term instrument sales, but doesn't have that big of an effect on long-term disposables used in the machines. Fortunately, that doesn't seem to be the case, according to Brian McKeon, IDEXX Laboratories' CFO, EVP, and treasurer: "In North America, we placed 388 Catalysts in Q1, with 304, or 78% are competitive or greenfield accounts."

It's great that IDEXX is taking business away from competitors, but how long can that last? Jonathan Ayers, IDEXX Laboratories' chairman, CEO, and president, doesn't think the company is anywhere near saturating the market: "At the end of Q1, our active installed base of Catalysts outside of North America has grown cumulatively to over 11,000 instruments and customers, and yet we believe the potential number of additional customers is roughly 5x that amount, and the number of Companion Animal practices is growing every year."

After the solid first quarter, management raised revenue guidance for the year by $15 million on either side of the range to $1.925 billion to $1.950 billion with about $5 million of the increase coming from better currency exchange rates.

Unfortunately, the earnings gain from the increase in revenue will be knocked out by an expected increase in the company's tax rate. Nevertheless, management expects earnings per share to be $0.10 higher than previously estimated due to the new share-based compensation accounting guidance. Management now expects earnings of $2.95 to $3.11 per share, which represents an increase of 21% to 27% compared to last year.