Please ensure Javascript is enabled for purposes of website accessibility
Log In Help Join The Motley Fool
Free Article
Join Nearly 1 Million Premium Members And Get More In-Depth Stock Guidance and Research
By Dan Caplinger – May 1, 2017 at 10:08AM

The tobacco giant sees good times ahead. Find out what you need to know.

1. Cigarettes make up the vast majority of its business...

The power of the Marlboro name and other well-known brands has been essential to Philip Morris, and even with all the talk of moving toward reduced-risk products, regular cigarettes still represent the bulk of the tobacco giant's business. In terms of sales volume, Philip Morris shipped 173.6 billion cigarettes during the first quarter of 2017. By contrast, the company saw shipments of only 4.4 billion units of its modified-risk heated tobacco products, nearly all of which came in Asia.

From a revenue perspective, the gap isn't quite as large, but it's still substantial. During the quarter, combustible products sales, including cigarettes, came to $5.63 billion. That compared to $435 million for reduced-risk product sales. Even as talk of transforming the company continues, it's important for shareholders to keep this key fact front and center in their analysis. 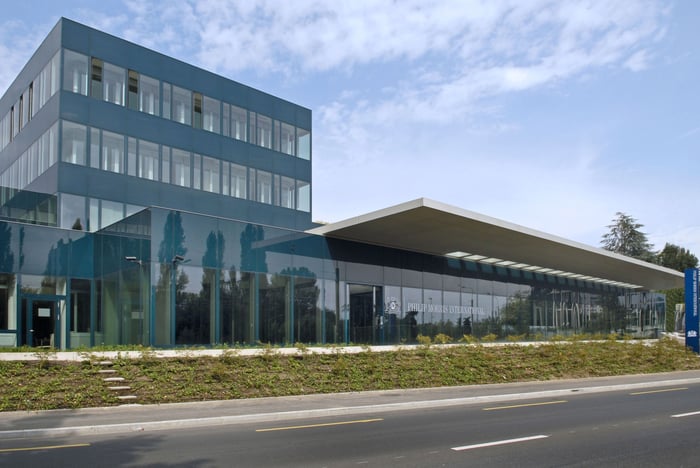 2. ... but growth in reduced-risk products has been extremely impressive.

Despite the current dominant role for cigarettes at Philip Morris, the question long-term investors have to ask is how long that will last. The pace of growth for the reduced-risk product category has been extremely swift, and the company is devoting more resources to production and sales that could dramatically alter its overall product mix quickly.

3. Marlboro isn't quite as dominant as one might think.

The Marlboro brand is a key one for Philip Morris, but not to the same extent globally that it is in the U.S. under the aegis of former Philip Morris parent Altria Group (MO -0.13%). In the U.S., Altria gets the huge majority of its cigarette sales from Marlboro, but for Philip Morris, Marlboro shipments amounted to just over a third of total cigarette movement during 2016. The L&M brand represented about 12% of total volume, and other key brands like Parliament, Bond Street, Chesterfield, Lark, and the namesake Philip Morris brand combined for about another quarter of the company's overall shipments. With the need to cater to international tastes and local preferences, Philip Morris has to maintain a wide stable of brands to satisfy its customers.

Many investors choose Philip Morris because of the dividend power that the tobacco industry has traditionally wielded. But currency-related hits have punished Philip Morris investors in terms of dividends. From a history of paying 10% to 20% dividend increases annually, Philip Morris has seen its annual dividend growth slow to just 2% in each of the past two years. 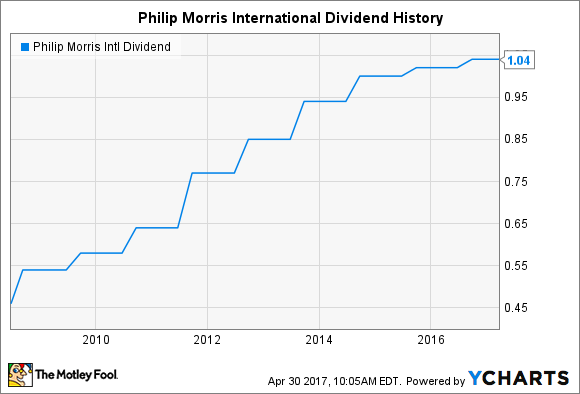 In good news for investors, Philip Morris has said that it anticipates much less negative impact from foreign currency fluctuations during 2017, and that should allow the company to capture more of its growth in local-currency terms on its dollar-denominated financial statements. That alone won't solve all of the industry challenges that Philip Morris faces, but it should put the tobacco giant in a better position to accelerate dividend growth in the years to come.

Philip Morris International has had great success in its decade-long history as an independent company. With strong stock performance in the past, Philip Morris is working hard to keep its positive momentum going and continue to deliver good results for its shareholders long into the future.