Please ensure Javascript is enabled for purposes of website accessibility
Log In Help Join The Motley Fool
Free Article Join Over 1 Million Premium Members And Get More In-Depth Stock Guidance and Research
By Brian Orelli, PhD – May 1, 2017 at 2:37PM

Sales of the biotech's cystic fibrosis drugs continue to grow as it develops next-generation drugs to treat more patients.

Cystic fibrosis expert Vertex Pharmaceuticals (VRTX -1.11%) reported solid first-quarter earnings after the bell on Thursday and gave an update on its pipeline of next-generation drugs to treat the disease. 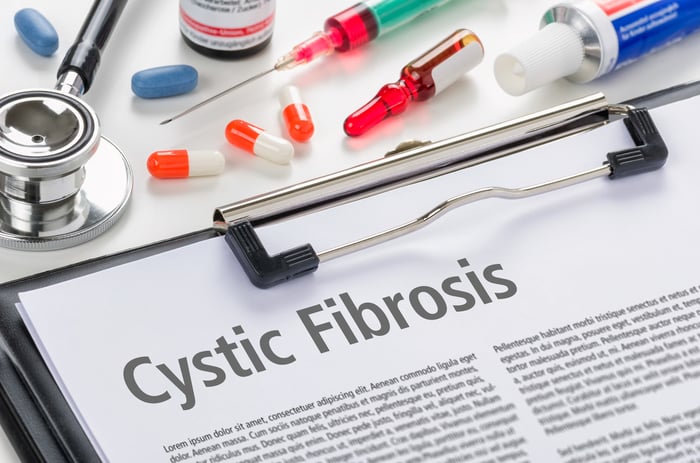 The tezacaftor and ivacaftor combination will eventually be used in combination with other drugs, but initially, it'll treat the same kinds of patients as Orkambi. Nevertheless, Stuart Arbuckle, Vertex's chief commercial officer and EVP, thinks the combination can produce higher sales than Orkabmi because of the reduced side effects:

As we know, there are a large number of patients wanting to be on the CFTR modulator like Orkambi but unfortunately weren't able to stay on the product often because of adverse events. We think that's going to a population of patients and their physicians who are likely to be very keen to try the lumacaftor/ivacaftor combination. We also know there's a number of patients who are naïve to therapy, have never tried Orkambi, and we think they also may think more favorably about the benefit-risk profile of tezacaftor/ivacaftor.

In addition to the triple combinations of tezacaftor and ivacaftor with VX-659, VX-445, or other molecules, Vertex is also working on potential triple combinations with a deuterated form of ivacaftor that Vertex recently acquired from Concert Pharmaceuticals (CNCE 7.72%). As Vertex's chairman, CEO, and president, Jeffrey Leiden points out, the reason has to do with convenience. (For consistency, brand and code names used by Leiden were changed to their generic names.)

Management increased guidance for Kalyedco sales and now believes they'll fall in the $710 million to $730 million range. Some of the increase is due to the one-time adjustments in the first quarter, but the demand for the drug appears slightly better than management thought when it first released guidance earlier this year.

Orkambi sales guidance remains the same, with expectations between $1.1 billion and $1.3 billion. Management appears to have decided not to raise guidance, even with the solid first-quarter growth, because the timing of securing reimbursement for the drug in Europe could have a larger effect on 2017 Orkambi sales than any changes in expectations for U.S. sales.

On the pipeline front, investors can look forward to data from three triple combinations of tezacaftor and ivacaftor with VX-152, VX-440, or VX-659 in the second half of this year. The combinations with VX-152 and VX-440 are phase 2 trials, so there may be some hints of efficacy in the data, although it certainly won't be enough to gain regulatory approval. Vertex plans to submit marketing applications for the double combination of tezacaftor and ivacaftor in the U.S. and EU in the third quarter, putting an approval sometime in 2018.