Cameco Corp (NYSE:CCJ), the world's largest publicly traded uranium miner, reported a first-quarter loss of $0.05 Canadian dollars a share. It was, as expected, a difficult quarter, with the uranium industry still mired in a long downturn.

However, there were some positives in the mix, and the more positive long-term outlook for the industry remains unchanged. Here are some of the particulars you need to know.

Cameco's first-quarter loss was $0.05 -- all results in Canadian dollars -- compared to a profit of $0.20 in the year-earlier period. Revenues, meanwhile, were $393 million, down from $408 million last year.

If you pull out one-time items, however, the first quarter came in at a loss of $0.07 versus a loss of $0.02 a year ago. So the quarter wasn't as bad as it might at first seem. That said, analysts had been expecting a loss of roughly $0.01 a share, so it's not surprising that Cameco's shares fell sharply on the news. 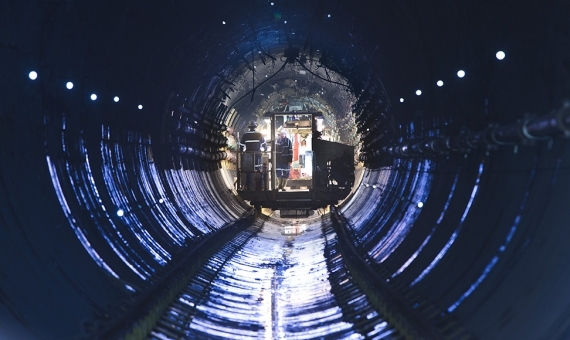 There were a number of negatives, including a uranium sales-volume decline of roughly 3% and realized uranium prices that were off by roughly 20%. Results in the company's smaller fuel-services segment were relatively weak, as well.

The company is also dealing with the cancellation of a notable contract to supply Japanese utility TEPCO. Cameco plans to fight TEPCO's decision to cite a force majeure event in the cancellation, but the issue is likely to linger for some time. Results were also hampered by severance costs related to the strategic changes the miner is making to deal with the weak uranium market, including trimming higher-cost production.

The biggest takeaway from all this is that Cameco continues to struggle with a difficult market. There's not a whole lot it can do about the current weak uranium market except to try to survive. And it's doing just that... in fact, the news wasn't all bad, even though shares sold off on the news. 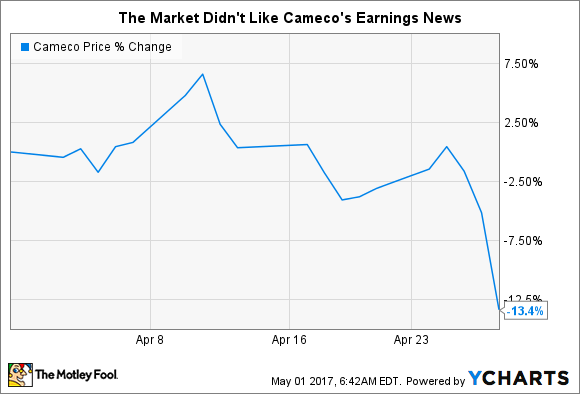 For example, despite the weak uranium market, Cameco's average realized price for the quarter was $34.43 per pound compared to the spot market price of $23.88 per pound. In other words, Cameco earned a nearly 45% premium to the spot price. Although Cameco's realized price was down year over year, its strategy of using long-term contracts continues to help soften the blow of the downturn.

Long-term contracts will limit upside gains when uranium prices pick up again, but the protection they're affording Cameco today is vital to the company's ability to survive the downturn intact. For example, along with earnings, Cameco announced it was paying a regular quarterly dividend of $0.10 a share. That's backed up by the long-term contract position and the company's expectation of better results through the year.

The first quarter is historically the weakest saleswise. But maintaining that dividend likely wouldn't be possible without the long-term contracting approach. 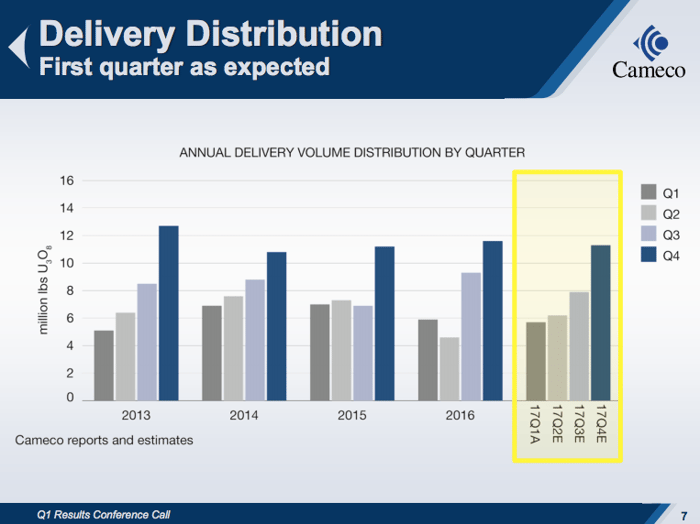 The company's long-term debt, meanwhile, was largely unchanged over the three-month span. Cameco's cash balance fell roughly 24%, but that's partly a function of the seasonal nature of the business. The cash burn in the first quarter, meanwhile, was much less than what it was in the year-ago period. So there was actually some improvement on that metric.

Costs were another bright spot, with the company reducing its administrative expenses by a hefty 20% year over year. Exploration costs, meanwhile, were lower by a third. Cameco continues to streamline its operations and limit its expansion efforts in an oversupplied market. Both are appropriate decisions, but neither limit the company's ability to ramp back up in the future since it continues to have a sizable reserve base.

It's also worth noting that privately held Kazatomprom, the largest uranium producer in the world, recently announced plans to trim 2017 production by 10%.So Cameco isn't alone in its efforts to adjust to the market. This is positive, since the largest producers are clearly taking action to clear the oversupply conditions that currently exist.

It would be hard to call Cameco's first-quarter results good, but they weren't exactly bad, either. The uranium miner is taking the right steps to deal with a difficult market, and frankly, it appears to be doing a decent job of adjusting. Meanwhile, there are approximately 55 new nuclear power plants under construction today, which should help improve the demand picture as they come online over the next few years, even though the uranium market is currently oversupplied.