Chart Industries, Inc. (NYSE:GTLS) reported first-quarter results on April 27, and the best way to summarize those results is that it was a mixed bag. On the positive, the company reported 5% revenue growth, which includes sales growth in all three of its major business segments, 14% sequential growth in new equipment orders, and positive cash flows from operations.

Unfortunately, the company continues to deal with expenses related to consolidation of some of its facilities, the relocation of its headquarters from Ohio to Georgia, and the general lumpiness of demand -- especially from the energy industry -- that led to a net loss of $2.9 million in the quarter. Nonetheless, management is confident in the steps they are taking, preparing the company for the eventual recovery in demand from the energy industry in particular, as well as expectations that restructuring efforts will pay off with $10 million in annual cost savings going forward. 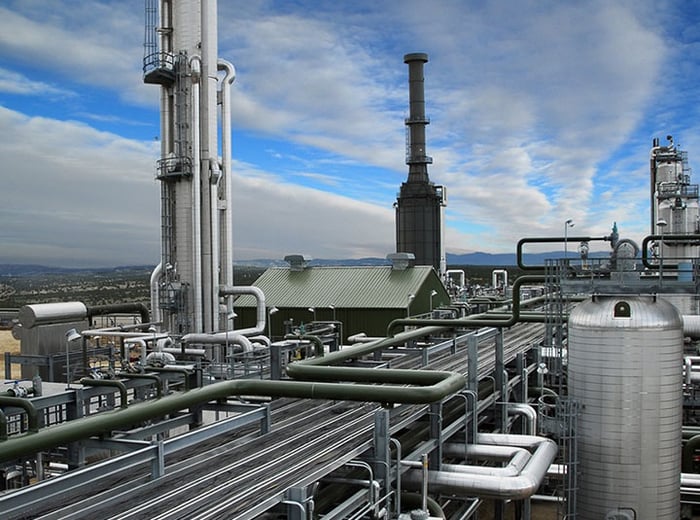 On a GAAP -- generally accepted accounting principles-- basis, Chart reported a nearly $3 million loss in the quarter, which was actually slightly improved versus the year-ago period. But when adjusting for non-recurring charges related to relocating the company's headquarters, consolidating other facilities, and some items related to the recent acquisition of Hetsco, Chart would have reported a small profit.

Chart generated $1.2 million in cash from operations in the quarter, down significantly year over year, but almost entirely because of timing of inventory investments and other working capital changes -- not any problems with operations. Gross margin percent was 27.3% in the quarter, up from 26.6% one year ago.

What's happening with restructuring and acquisitions

While Chart made some pretty substantial changes to its operating profile in 2016, the company has continued making moves to improve its cost structure and its ability to respond to the market. Chart is relocating both its biomedical manufacturing facility (currently located in Buffalo, NY) and its corporate headquarters (currently located in Cleveland, OH) to Canton, GA. The company said it finished moving the biomedical facility in the first quarter and will complete the corporate headquarters move before year-end.

Once completed, the current round of restructuring is expected to produce $10 million in annual cost savings.

Chart also completed its acquisition of Hetsco in the first quarter. Hetsco, a highly skilled specialty welding and fabrication company, is now part of Chart Lifecycle, the company's services business. Going forward, this will be an important part of Chart, since Lifecycle is targeted at generating steady, recurring revenue outside of the purchase cycle for replacement and new equipment. Since much of Chart's business is heavily tied to industries with major cyclical swings, growing the Lifecycle business and its recurring service revenue will be an important part of how Chart reduces the impact of cyclical downturns going forward.

Chart's first quarter wasn't particularly impressive, but it was also pretty much in line with what management expected it would be. Factoring that in with steady progress on the company's other efforts, management held steady on its full-year guidance for $875 million to $925 million in revenue and non-GAAP earnings of $0.60 to $1.00 per share.

But at the same time, big management changes are afoot. Longtime CEO Sam Thomas is retiring in May and will be replaced by president and COO Bill Johnson, who has been with Chart for about one year, while CFO Kenneth Webster decided not to relocate, stepping down as CFO in March. His replacement, Jillian Evanko, has been with Chart since February. Thomas will take on the role of executive chairman of the board before retiring in 2018.

Moving forward, two major restructuring initiatives in the past three years should give Chart a leaner, more efficient business that should help its bottom line in the current environment and pay off when the cycle turns. In the meantime, investors probably want to keep a close eye on any change in direction from new management when Johnson takes over in May. Thomas' remaining on the board for now offers some indication of a smooth transition, but with two relative outsiders taking the two most important positions at the company, it's worth staying up to date on what's happening on mahogany row in the near future.