Bunuelos are coming to a Chipotle near you. Should you try the stock as an appetizer?

Chipotle (CMG 0.20%) is getting sweeter. I'm not talking about the stock, which surged after its earnings release on April 24, but its food offerings to come. On the conference call, CEO Steve Ells introduced the new menu item to be unveiled later this year.

We have continued to develop two desserts which we'll begin testing later this month. The one that I'll tell you about today is a traditional Mexican dessert called bunuelos, which is fried tortilla strips with honey, cinnamon and sugar. The bunuelos will be served with an apple caramel butter dipping sauce. Bunuelos are simple to make using our existing equipment and require us to add just a few additional ingredients. They're delicious and complement our menu nicely.

I found it a bit strange that Ells mentioned the second dessert was still being tested, and that he only was able to speak to one of the items. The important thing, though, is that the new menu items should be coming out this year. If successful, the company could build on its successful first quarter and accelerate its turnaround, now 1.5 years in the making. 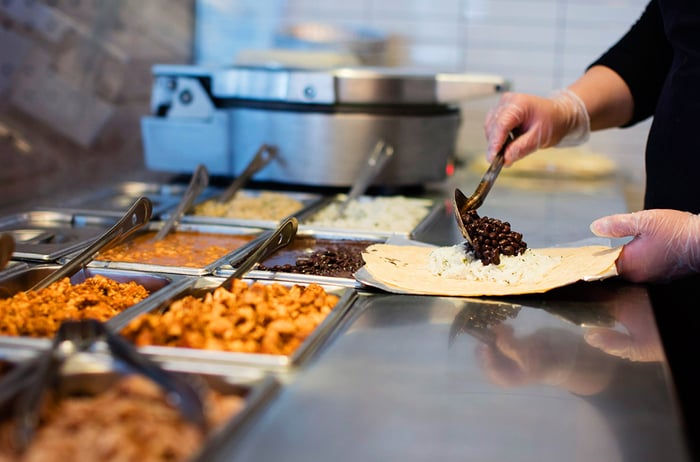 Chipotle has had a mixed history of new menu items. The company tried out breakfast before, but later scrapped it since the returns were not compelling enough. However, the company has touted more modest additions to the menu, such as its tofu and chorizo items, as having a positive effect. Therefore, bunuelos have a chance of gaining traction as they only require a few extra ingredients and are relatively simple to make.

As I've written previously, I've been a fan of Chipotle going on the offense with new marketing initiatives, instead of the rampant discounting it was doing last summer in the wake of its food safety scares.

To that end, Chipotle noted an improvement in its two-year comp stack from negative 20% in January to only negative 16% in February and March, with the positive trend continuing in April. What is interesting as that these numbers were improving even before the new marketing initiatives rolled out in full force in March. CEO Steve Ells attributed the recovery to the simplified restauranteur program and increased focus on the customer experience that was the company's focus through December and January.

Could it boost margins?

While Chipotle has a number of initiatives in place to cut costs and reduce labor churn, which all benefited this quarter, it is ultimately the sales leverage that matters most. The 17.7% comp gains contributed a huge 560 basis-point increase in restaurant-level operating margins. And while the restaurant-level margin of 17.8% the company recorded is a far cry from peak 2015 margins in the high 20s, it's certainly a big improvement. CFO Jack Hartung noted that if the company only gets back to the volumes it was previously at prior to the crisis, it would have fully restored its operating margin of 27% to 28%, assuming the new 5% price increase does not affect volumes.

The bottom line is that trends at Chipotle are now moving in the right direction, and if bunuelos are a hit, that would be icing on the tortilla.