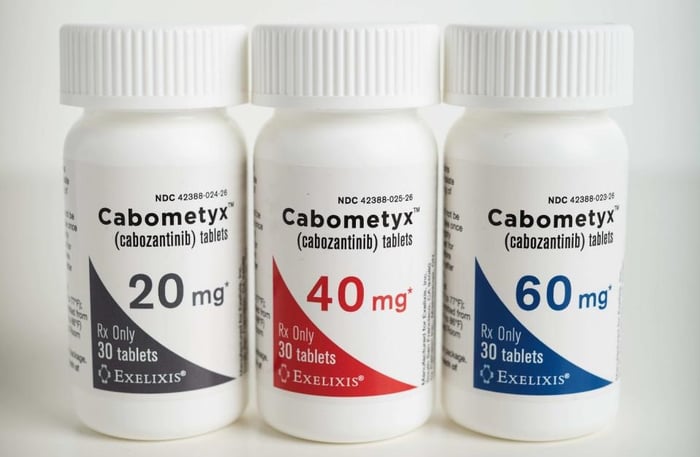 The uptick in new prescribers is a good sign as Exelixis' SVP of commercial Patrick Haley explained it should result in increased use for each new prescriber:

When asked by an analyst about predictions on future profitability, you could hear someone on the management team laugh at the question, after which Michael Morrissey, Exelixis' CEO and president, responded:

Our stated goal previously has been to generate free cash and reinvest that free cash in the business. That goes back to the last financing that we did in 2015 and that's still the operational strategy going forward. Obviously, we want to focus on growing the top line through cabo, additional cabo indications, new compounds, internal, external, whatever. But that's the real focus going forward, is to really build the business based upon using free cash that we can generate through product sales.

Sounds like investors shouldn't necessarily expect growing sales to fall to the earnings line, but Exelixis also doesn't plan on running a deficit to support growth, either.

Not surprisingly, management still isn't giving guidance on sales of Cabometyx. The only guidance given was to reiterate that total costs and operating expenses for 2017 will fall between $290 million and $310 million.

Besides growing sales in the current indication, the nearest near-term opportunity for Cabometyx comes from the CABOSUN data, where Cabometyx beat Pfizer's Sutent in the font-line setting in advance kidney cancer patients. Exelixis expects to apply for FDA approval in that setting in the third quarter, putting a decision from regulators in the early part of next year.

The second interim peek at the phase 3 CELESTIAL trial in liver cancer is expected in the second half of the year. If the data are positive, Exelixis expects to apply for approval to treat patients with liver cancer in the first quarter of next year; otherwise, investors will have to wait for the final analysis from the trial due sometime in 2018 to see if Cabometyx can treat liver cancer.

Finally, Exelixis is working on its next strategy for Cabometyx, combining it with immune checkpoint inhibitors through collaborations with Bristol-Myers Squibb (NYSE:BMY) and Roche. A phase 3 trial in kidney cancer combining Cabometyx with Bristol-Myers' Opdivo and Yervoy is expected to start in the middle of this year. And a phase 1b with Roche's Tecentriq in multiple tumor types is expected to start around the same time.