Shares of Staples, Inc. (NASDAQ:SPLS) popped last month after the office-supply retailer said it was exploring a sale after regulators rejected its proposed merger with Office Depot. According to data from S&P Global Market Intelligence, the stock finished up 11.4%.

As the chart below shows, the gains came almost entirely in the days following news of a potential sale. 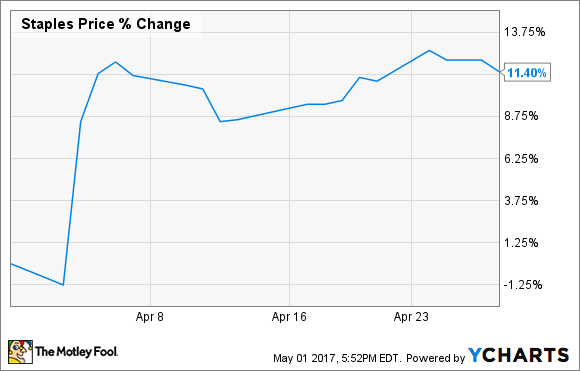 According to The Wall Street Journal, the leading office retailer has entered into talks with a number of private-equity firms, who could see opportunity in Staples as the company is still profitable, despite sliding sales, and trades with a single-digit P/E ratio.

The retailer has seen comparable sales decline for several years in a row as offices have advanced into the digital age, turning away from the traditional products that drove Staples' sales like printers and paper. While its retail division has suffered, its business delivery service has remained strong, and the company is one of the biggest online retailers in the U.S.

There's been no further news in the almost month that has passed since news broke about a potential sale, but rumors have spread recently that PE firms could be targeting other retailers like Party City and Whole Foods Market. With Staples' retail business in secular decline, a sale seems like the best exit for the company and its shareholders. If management moves closer to a deal, that stock should pop once again.