The current bull market is getting long in the tooth -- it's in its eighth year -- which makes it challenging to find "cheap stocks," which I'd define as stocks that sport one or more attractive valuation metrics relative to their current financial performance and long-term growth prospects.

Moreover, there are usually good reasons that many cheap stocks are cheap; typically, they're either widely considered to have very limited future growth potential, or they're quite risky for various reasons.

One stock that fits the "cheap" -- or at least "somewhat cheap" -- bill, but isn't one of the troubled cheap stocks, is amusement park operator Cedar Fair (NYSE:FUN). Moreover, the stock pays a juicy 4.8% dividend, and has whipped the market over the long term, returning 355% over the 10-year period through April 28, versus the S&P 500's 98% return. 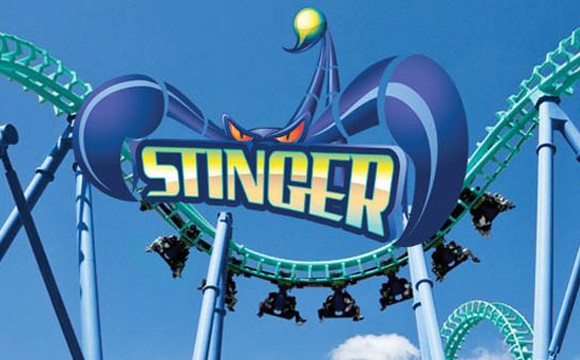 Despite being one of the largest regional amusement park operators in the world and generating $1.3 billion in revenue in 2016, Cedar Fair seems to fly under many investors' radars. This is a fact that can make for a wonderful stock for the long term, since these types of stocks can remain relatively cheap, or at least not overvalued, because they're not as prone to short-term money pouring in.

Cedar Fair's parks are located in Ohio, California, North Carolina, South Carolina, Virginia, Pennsylvania, Minnesota, Missouri, Michigan, and Toronto, Canada. Its four parks that generate the most revenue, and which are probably its most well-known ones, are Cedar Point, located on the the shore of Lake Erie in Ohio; Knott's Berry Farm in Buena Park, California; Wonderland in Toronto; and Kings Island in Cincinnati. Additionally, the company operates the Gilroy Gardens park in California under a management contract.

Amusement parks are an attractive space, largely because the barriers to entry are high (high initial construction cost, limited land availability in some regions, permitting issues). Moreover, companies eyeing entering the space or expanding aren't likely to sink huge amounts of money constructing a new park too close to an existing park because many local economies can't support more than one regional park. This is great news for Cedar Fair's well-established parks, as investors can probably count on direct competition remaining quite limited for many decades to come.

Cedar Fair's financials over the last five years are just what investors like to see: revenue has increased, but earnings and free cash flow have increased even faster. Earnings increasing faster than revenue means that Cedar Fair's profit margin has been expanding. An expanding profit margin usually reflects good pricing power -- it's not surprising that the company wields solid pricing power, given the above discussion about direct competition in this space being limited. 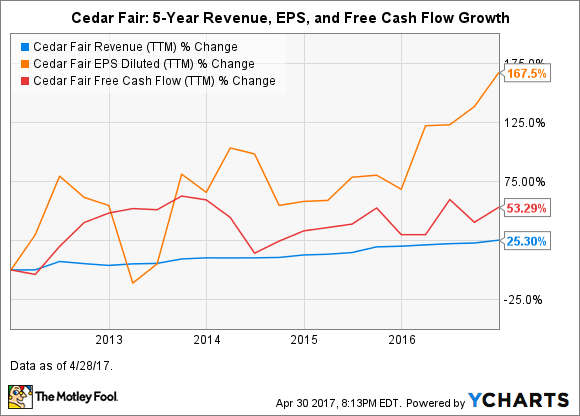 Cedar Fair's strong and dependable cash flow allows it to pay a generous dividend, which currently yields 4.8%. The company's structure as a master limited partnership (MLP), rather than a more typical corporation, is a contributing reason for its attractive dividend. Such a structure allows Cedar Fair to pay out the bulk of its earnings to its unitholders without first paying significant federal and state taxes. The company has paid a dividend for 30 consecutive years, and has hiked its dividend in each of the last five years. 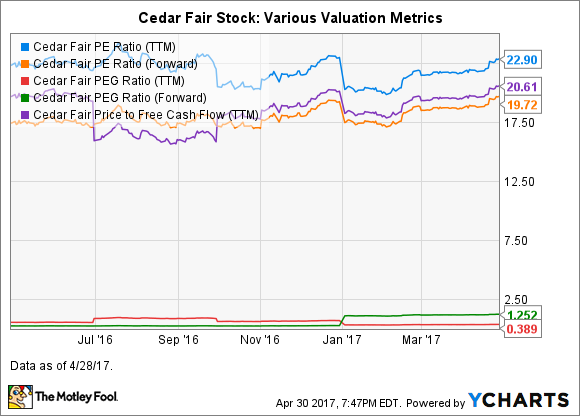 However, looking at valuation metrics alone without taking into consideration earnings growth is missing the boat, despite the fact that many financial writers seem overly enamored by the most common valuation metric, the price-to-earnings (P/E) ratio.

Cedar Fair's stock looks quite attractive when we bring earnings growth into the valuation mix by looking at the PEG (P/E to trailing or future projected growth) metric. While various factors come into play, a rough rule of thumb is that a PEG of 1.0 implies that a stock is fairly valued. Cedar Fair's trailing PEG is a very attractive 0.39, though its forward PEG is a less attractive 1.25. However, the headliner attraction to me is that it sports a five-year PEG of 0.78, which means that it's somewhat undervalued based upon its projected EPS growth over the next five years. Wall Street analysts expect that Cedar Fair will grow EPS at a rather torrid average annual rate of 25.4% over this period.