Successful growth investors know that the best stocks are not necessarily the ones that are growing the fastest at the moment. Wide-moat businesses that can grow for many years are prized for their ability to bring the power of compounding growth to the portfolios of patient investors. Surgical robot maker Intuitive Surgical (NASDAQ:ISRG) fits that bill, and here are 10 reasons why many years of growth look to be ahead for the company.

Intuitive makes money not only by selling its DaVinci robotic surgery systems but also by selling the non-reusable instruments and supplies necessary for every procedure. Last year, recurring revenue from this razor-and-blades model amounted to 71% of total revenue, and in Q1 of 2017, that figure rose to 77%. A high recurring revenue adds stability and predictability to the company's business. 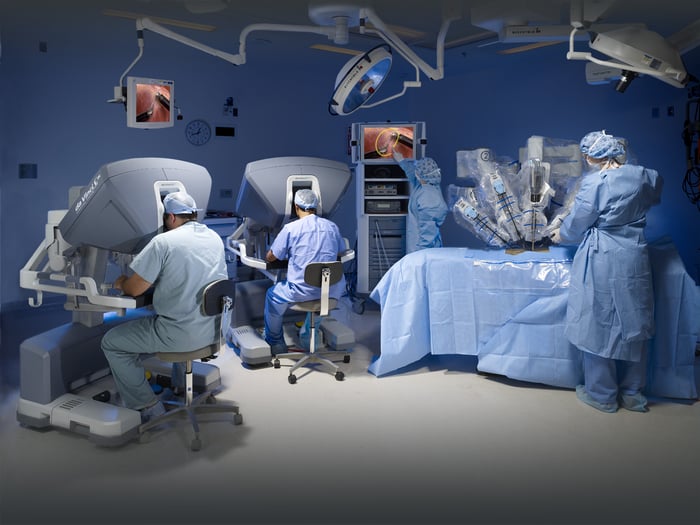 Intuitive Surgical has had its market to itself for years, and that is a tremendous advantage; monopolies in lucrative markets are rarely maintained for so long. With about 4,000 systems installed, over 10,000 peer-reviewed publications, and more than 1700 studies completed, the company has dug for itself a massive moat. Not only has that paid off in the form of stable prices for systems and instruments, but it will make the company very difficult to dislodge by competition.

With over half of revenue tied to supplies, growth in procedures is an important indicator of the true performance of the business. Procedures grew 15% to 750,000 in 2016 and 18% year-over-year in Q1 of 2017. The most important driver of procedure growth in the U.S. was general surgery, and specifically hernia repair, which is still in the early stages of opportunity for robotics and should continue to be a tailwind for many quarters. Results in the first quarter caused Intuitive to raise its estimate of full year procedure growth from 9% to 12% only three months ago to 12% to 14% now.

Still mostly ahead as opportunity for Intuitive is a piece of the 100,000 thoracic surgeries per day in the U.S. Outside the U.S., the opportunity is even larger. With hernia repair still ramping up, thoracic surgery will extend the growth in general surgery for many years into the future.

Not only are the DaVinci systems already in place being used more, but growth in shipments of new systems is healthy as well. In 2016 the company shipped 9% more DaVinci systems than in 2015, resulting in an increase in systems revenue of 10%. In Q1 of 2017, 133 systems were shipped, an increase of 21% over the period a year earlier, much of that growth coming from a leasing program that should continue to speed placements in the future.

Outside the U.S., procedures are growing even faster than in this country -- 24% in 2016 and 28% in the most recent quarter -- as robotic surgery is in an earlier stage of adoption overseas. The company has a temporary situation in China that has put a halt to system sales there. The quota for DaVinci sales was filled and the Chinese government has yet to issue a new one. Once that situation is resolved, there will be a boost to the international business even beyond the current healthy pace.

Intuitive will be creating a burst of system placements when it introduces a new system model in the next few months: the DaVinci X. This model pairs the most advanced instruments from the high-end Xi system with the lower-cost Si platform, making a new, lower cost price point for a system that can do the most advanced procedures.

The last time the company rolled out a new system, the Xi in 2014, it caused a temporary slump in the business and a big hit to the stock price during the transition. This time, the company is big enough and established enough that the new launch is causing nary a blip in growth.

Whereas the price point of DaVinci X will broaden the customer base, the upcoming DaVinci Sp will open the door for new procedures that can't be done with robot-assisted surgery today. The new single-port system, expected to launch in 2018, will introduce the capability for delicate mouth and throat surgeries as well as intra-rectal procedures.

Even further into the future, Intuitive will be launching systems based on flexible catheter technology being developed in a joint venture with Shanghai Fosun Pharmaceutical Company in China. These systems will be able to thread robotic-assisted catheters deep into the lung for early diagnosis and cost-effective treatment of lung cancer.

Augmented reality is cute in Pokemon Go, but Intuitive will be using it to improve lives. One of the greatest sources of variability in surgical outcomes is the difficulty in locating structures such as nerves or the margins of tumors. The company has been working on an augmented reality system for presenting preoperative imaging and other data superimposed on the image of tissue for the surgeon. A prototype is in the lab today and will be used on humans in 2018.

Growth for years to come

Intuitive Surgical has built a strong business model and a fortified market position. The company's stock carries a premium valuation of 36x forward earnings because the market is recognizing the potential for this company to compound growth for many years into the future. Given what's ahead for Intuitive Surgical, that's a very reasonable assessment.