Please ensure Javascript is enabled for purposes of website accessibility
Log In Help Join The Motley Fool
Free Article Join Over 1 Million Premium Members And Get More In-Depth Stock Guidance and Research
By Timothy Green - May 3, 2017 at 1:05PM

The chip company's comeback won't be easy, and it won't be quick.

Shares of Advanced Micro Devices (AMD 2.21%) soared nearly 300% in 2016 due to nothing but hope. Hope that, after years of losses, a deluge of new products would make AMD competitive in its core markets once again. Hope that, despite intense competition from Intel and NVIDIA, profits would eventually surge to record highs.

AMD stock lost 24% of its value on Tuesday as this euphoric optimism collided with reality. The company's first-quarter report simply matched analyst expectations, with revenue growing but losses persisting. Polaris, AMD's mainstream graphics cards, and Ryzen 7, its high-end CPUs, delivered growth. But the company's guidance for the second quarter left a lot to be desired considering the slate of new products.

The story of AMD's comeback has fueled the stock over the past year. Now it's time for the numbers to prove that story right or wrong. 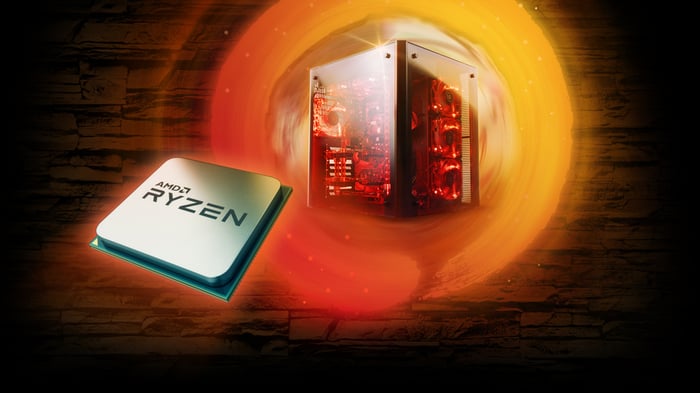 AMD grew revenue by 18% year over year to $984 million during the first quarter, with its compute and graphics segment producing 29% growth. This was driven by sales of Polaris graphics cards, which didn't launch until the end of the second quarter last year, and Ryzen 7 CPUs, which launched at the beginning of March.

The compute and graphics segment still posted an operating loss of $15 million, but that's a vast improvement over the $70 million loss reported during the first quarter of 2016. Overall, AMD reported a GAAP net loss of $73 million and a non-GAAP net loss of $38 million; both improved compared to the prior-year period.

Ryzen 7 drove AMD's highest desktop processor revenue in more than two years, according to CEO Lisa Su. That's not surprising, given that AMD was woefully outmatched in the PC CPU market prior to Ryzen. The comparison is about as easy as it gets. GPU sales rose by a double-digit percentage, with both the ramp of notebook design wins and improved sales of desktop graphics cards driving the increase.

AMD expects its second-quarter revenue to grow by just 12% year over year. I suspect the steep decline in the stock price following AMD's earnings report was mostly due to this guidance. Here's what the second quarter will contain:

In other words, the second quarter of last year contained essentially none of the above. The comparison should be incredibly easy for AMD. Given all of these new products, 12% growth simply isn't enough. To be fair, Vega and Naples may not contribute much revenue in the second quarter, depending on when they launch and how long they take to ramp up. But even so, if Polaris and most of the Ryzen desktop lineup can only drive 12% growth, it's no wonder the stock fell off a cliff.

There's no question that AMD is more competitive today than it was a few years ago. There's also no question that its revenue will continue to rise in the second half, driven by more product launches. But AMD's comeback won't be easy, and it won't be quick.

The idea that AMD is simply going to waltz in and steal significant market share from Intel and NVIDIA, which drove the explosion in the stock price last year, is optimistic to say the least. AMD is playing catch-up everywhere. Investors betting on the best-case scenario need to adjust their expectations.