IHS estimates that there will by 76 million autonomous vehicles on the road by 2035, and Boston Consulting Group expects the driverless car market to be worth $77 billion by that year.

Autonomous vehicles have the potential to upend the transportation and technology industries, something that isn't lost on Apple (NASDAQ:AAPL) and Amazon (NASDAQ:AMZN). Both companies have been in the spotlight recently for their self-driving vehicle plans, so let's take a look at what each is doing with driverless car technology and why. 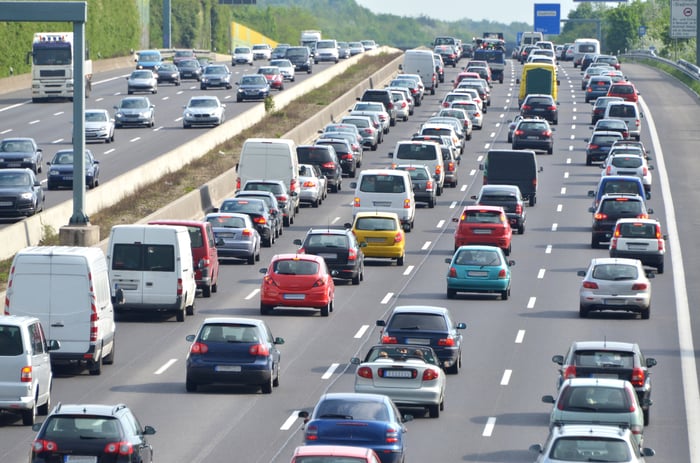 Amazon's pursuit of the perfect delivery

A recent Wall Street Journal article (paywall) said Amazon created a driverless car technology group about a year ago with the intention of figuring out how to use autonomous vehicles to improve its delivery process.

The news wasn't all that surprising considering Amazon is testing autonomous drones for package delivery. But an autonomous vehicle could help the company both speed up deliveries and potentially take over the entire delivery process itself.

As ArsTechnica recently pointed out, truck drivers are only allowed to drive 10 hours before they're required to take a break. Autonomous vehicles don't have the same sleeping needs and could make shipment deliveries in about half the time.

Amazon's opportunity would be in using these autonomous trucks, or even autonomous drones, to make deliveries to homes and take charge of nearly its entire shipping process. The company has already starting using its own planes, and it recently took over some cargo shipments from China to the U.S. in order to control more of the shipping process. Snatching up autonomous driving vehicles, or leasing them, plays exactly into that strategy.

Apple's driverless car plans have been a bit of an widely rumored secret for while, after The Wall Street Journal reported back in 2015 that the company had hundreds of employees working on secretive car project dubbed "Project Titan."

There have been several reports since then indicating that Apple has cut back on the project, that it's been delayed, or that its about electric cars and not driverless ones. But rumors of the company's autonomous vehicle ambitions reemerged over the past few weeks after a separate article in the Journal said that Apple had received an official permit from California to test driverless cars on public roads, and that it had hired a handful of former NASA engineers and robotics experts to join the company's autonomous driving research team. On top of all that, Bloomberg spotted an Apple-owned, self-driving Lexus on the road just last week.

Apple may have slowed down its self-driving car plans in the recent past, but it appears the company is now pursuing the technology pretty aggressively. It's more likely than not that Apple is working on software for driverless cars, and not building its own self-driving vehicle to sell to the masses.

That's similar to what Google's Waymo is doing with Fiat Chrysler. Nested in the Alphabet (NASDAQ:GOOG)(NASDAQ:GOOGL) structure, Waymo is developing its own driverless car software built on its years worth of research and testing in order to create self-driving services for things like trucking and ride-sharing. Apple could take a similar route and earn money from leasing out its software or selling it directly to automakers. But at this point, Apple is almost certainly trailing the leaders in the space, and it's unclear exactly when, if at all, it could catch up.

We're probably more than a few years away from Amazon or Apple making any public announcements about their driverless car plans, but based on the recent news, it's clear that both companies see a lot of value in pursuing this emerging technology.