Tens of thousands of investors will soon descend on Omaha, Nebraska, for Berkshire Hathaway's (NYSE:BRK.A) (NYSE:BRK.B) annual meeting. But before gorging on Dilly Bars and listening to Charlie Munger's quick wit, it's a good time to recap what's going on across the Berkshire empire.

Berkshire has a perennial profit center in its insurance companies, but as some rise, others fall.

Insurance profits have seen better days. A recent report by Fitch Ratings suggested that industrywide combined ratios in property and casualty insurance could rise as high as 108% in the next few months, suggesting that insurers will pay out $1.08 in claims and expenses on every $1.00 in premiums earned, the worst level in 15 years. GEICO posted a combined ratio of 98.2% for 2016, resulting in its lowest underwriting profit since its full-year loss in the year 2000.

For companies obsessed with meeting quarterly expectations, this presents a challenge. But for those who operate with the long haul in mind, it's cycles like these where low-cost producers like GEICO can sacrifice smaller profits today for larger earnings in the future. In his letter to shareholders released earlier this year, Warren Buffett wrote the following about how GEICO was capitalizing on weak insurance profits:

GEICO's growth accelerated dramatically during the second half of 2016. Loss costs throughout the auto-insurance industry had been increasing at an unexpected pace and some competitors lost their enthusiasm for taking on new customers. GEICO's reaction to the profit squeeze, however, was to accelerate its new-business efforts.

Progressive reported that its combined ratios were lower in every single month of the first quarter of 2017 compared to the relevant periods last year, in what may be a sign that GEICO's strategy to forgo profits to collect market share may pay dividends sooner rather than later.

Reinsurance is a question mark. Volatile by its nature, Buffett has warned that the future for reinsurance doesn't look as bright as the past. According to Aon Benfield, capital in the global reinsurance industry reached a new record high at the end of 2016, which promises to drag on the industry's profitability as competition heats up. Every shareholder would be wise to listen carefully when Buffett inevitably shares his view on the reinsurance industry this weekend.

Regulated utility companies offer stable -- albeit relatively pedestrian -- profits. But Buffett sees the utilities businesses as a constant profit-generating sponge for the company's cash. After the end of the first quarter, PacifiCorp, a division of Berkshire Hathaway Energy, issued a $3.5 billion plan for a wind and solar project that would span from Wyoming to California. In progress is a $3.6 billion plan in Iowa that MidAmerican Energy announced last year.

Suffice it to say that Buffett would put more money to work in energy projects if he could, but there is only so much capacity, and only so much time to get it in place. To put the scale of these projects in perspective, consider that the $3.6 billion Iowa plan will produce enough energy to power as many as 520,000 homes.

Regulated utilities are an excellent use for cash because the returns are virtually assured thanks to long-term contracts and governments' willingness to protect utilities' local monopolies. One need only to look at the stability of Berkshire Hathaway Energy's operating earnings before interest and taxes, which has grown at a respectable, and largely predictable, single-digit clip in recent years. Expect no surprises here.

After losing volume as commodity prices broadly declined, the railroad industry is recovering. Across the industry, carloads are trending higher than last year. Earnings reports by Union Pacific and CSX topped consensus forecasts, setting the stage for a good quarter for BNSF.

Prices for oil, coal, and other energy commodities were well off their 2016 lows in the first quarter of 2017, and BNSF stands to benefit. Industrial products and coal shipments, which made up approximately 36% of BNSF's carloads in 2016 on a combined basis, rise and fall with commodity prices. Where energy prices go, BNSF's revenue and profit should follow. Finally, commodity prices are generally moving higher rather than lower. 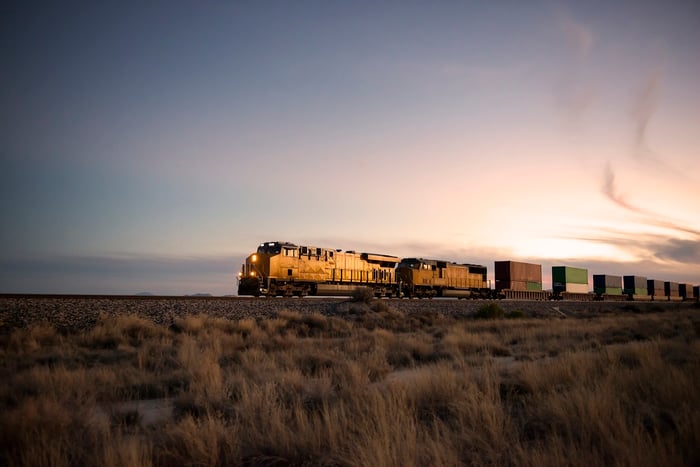 Berkshire's status as a conglomerate becomes obvious when one surveys its financial statements to see that it groups all of its manufacturing, service, and retail companies as a single unit. From its most recent high-tech manufacturing "elephant," Precision Castparts, to businesses as simple as Acme Brick or Dairy Queen, this unit includes virtually everything else under the Berkshire umbrella.

Berkshire has almost entirely circled the calendar with Precision Castparts and Duracell in its reported manufacturing results, so the days of juiced earnings from the inclusion of two new businesses are largely in the past.

As a whole, this group includes mostly low-growth, mature businesses, many of which are slowly rolling up smaller peers in bolt-on acquisitions. (Excluding Precision Castparts and Duracell, manufacturing revenue was flat in 2016.) In the aggregate, this segment is almost as "boring" as the utilities, but the group generates excellent returns on net tangible assets on a combined basis -- 24%, per Buffett's calculations for 2016.

Investors will want to hear if Buffett has any big plans for allocating more capital to bolt-on acquisitions in this broad segment for the remainder of the year.

On the hunt for a big deal

Buffett is stretching further to put Berkshire's cash to work. In the last few months, Berkshire invested billions to purchase shares of Apple and four major airlines, reversing his view that tech is outside his circle of competence, and that airlines are uninvestable.

As recently as February, Kraft Heinz, which is 27% owned by Berkshire Hathaway, made an unsolicited $143 billion bid to merge with Unilever in what would have become the second-largest merger in history. Undoubtedly, Buffett was standing at the ready to play the role as banker in yet another aggressive acquisition led by 3G Capital.

Berkshire's pile of cash -- $86 billion at the end of 2016 -- earns next to nothing as interest rates waver around 1%. Having said that he would be "delighted" to repurchase shares of Berkshire at a price of 1.2 times book value, perhaps Buffett may open the door a little wider, setting the stage for repurchases at 1.3 times book value.

With shares recently trading for about 1.45 times book value, it wouldn't give him much latitude to follow through with repurchases today, but with cash piling up and opportunities few and far between, maybe it's time for Buffett to reconsider.