Shares of genetic-testing pioneer Myriad Genetics (NASDAQ:MYGN) received a much-needed boost today, rising as much as 16%, after the company announced fiscal third-quarter 2017 financial results. The stock has witnessed a 42% decline in the last year, although it is now up roughly 28% year to date, as investors see signs of life for the company's most important revenue machine and are holding out hope for a pipeline of promising growth products.

The strong performance in the most recent quarter prompted management to raise its full-year fiscal 2017 financial guidance for revenue and narrow the range for earnings per share. As of 12:45 p.m. EDT, the stock had settled to a 15.5% gain. 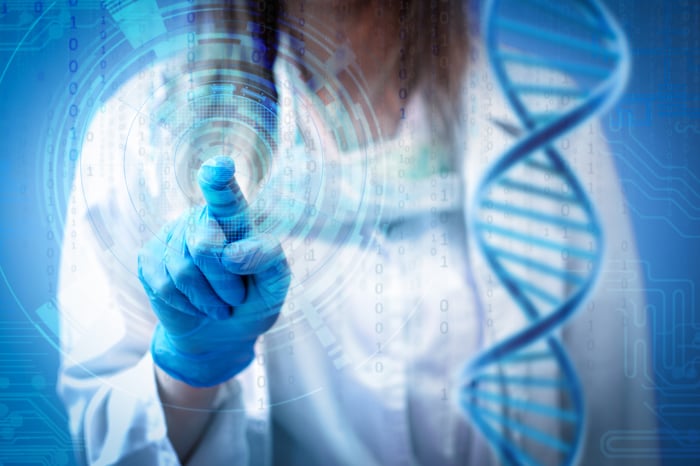 There were reasons for optimism and pessimism in the financial update. Consider how the most important products fared compared to last year's fiscal third quarter:

A 10% year-over-year drop in revenue from hereditary diagnostic testing may not seem like much reason to celebrate, but it marks the second consecutive sequential gain for Myriad Genetics after many quarters of decline. It's a silver lining investors aren't willing to overlook.

Of course, the array of promising growth products is turning in more mixed results. Products excluding GeneSight combined for a year-over-year drop in revenue of $1.7 million. In fact, if not for GeneSight, Myriad Genetics' total revenue would have declined. It's a major reason for the updated revenue guidance -- and investors should be happy to have GeneSight growing into a significant contributor to the overall business and performing well against offerings from competitors.

Investors are aware that Myriad Genetics is a company in transition, turning away from proprietary testing products (driven by price) and toward cheaper, larger-scale, and more flexible services such as GeneSight (driven by volume) that are in high demand from patients and clinicians. Viewed through that lens, there were no major surprises in the most recent quarter. The company continues to work toward its long-term goals.