With oil prices stabilizing and rig counts on the rise, NOW (NYSE:DNOW) delivered its best quarter of sequential revenue growth since before the oil market downturn began. Furthermore, while the oil equipment distributor hasn't yet returned to profitability, its loss continues to narrow. Those trends show no signs of abating given the accelerating momentum of the shale drilling rebound. 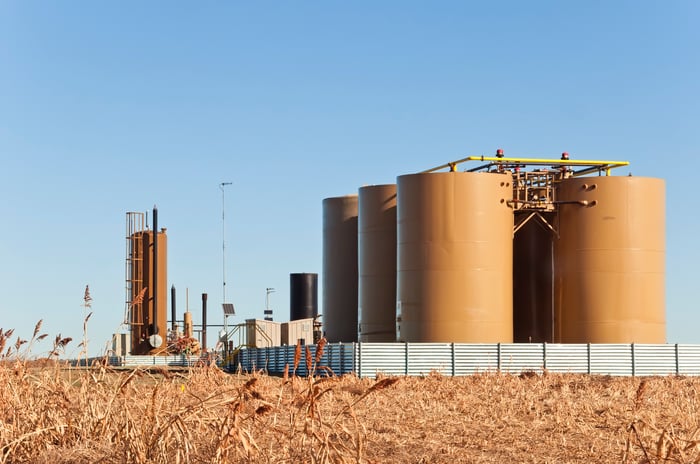 CEO Robert Workman, on what fueled growth during the quarter, pointed out, "We are excited that rig count improvements from late last year materialized into tank battery facility construction in the quarter, driving our largest sequential revenue gains since before the downturn."

Workman notes that rising drilling activity drove demand for tank battery facilities, which is a system of storage tanks that hold several days of production from wells. These facilities are connected to a well via a pipeline and contain valves and vents to help separate oil, natural gas, and water. As shale drillers expand their drilling budgets and drill in new areas, they need to build more of these facilities to support development. For example, leading Permian Basin driller Pioneer Natural Resources (NYSE:PXD) is ramping up spending on tank batteries this year because it's developing five new areas across its acreage position as a result of the improving oil market. Because of that, 40% of the wells Pioneer Natural Resources drills this year will flow into newly constructed tank batteries versus just 16% last year.

Given the relative stability of oil prices thanks to OPEC, Workman anticipates that drillers in the U.S. will continue to add more rigs, which should fuel sales next quarter, partially offset by the typical seasonal slowdown in Canada. That said, the rise in output from shale could backfire later this year should OPEC stop supporting the market, which is something to keep an eye on because it could slow the company's momentum in the back half of the year.