Shutterstock (NYSE:SSTK) has helped its clients with the vital job of transforming their businesses into digitally savvy operations, and the company's efforts to expand its library of images, videos, and other content have resulted in a much larger collection over time. Yet what investors want to see from any business is profit growth, and although investors are sometimes willing to accept momentary pauses in a growth trajectory, they still want assurance that the future will work out well.

Coming into Wednesday's first-quarter financial report, Shutterstock investors wanted solid revenue growth from the digital content provider, even though they were willing to accept roughly flat earnings. What they weren't prepared to see is the drop in adjusted earnings that Shutterstock suffered, although the company itself remained confident in its long-term prospects. Let's look more closely at Shutterstock to see what its results have to say about its future. 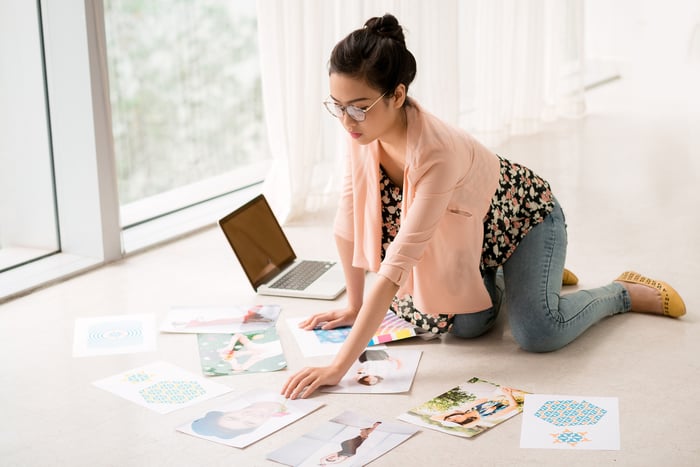 Shutterstock's first-quarter financials came as a minor surprise to those familiar with the stock. Sales performance was relatively good, as revenue climbed 12% to $130.2 million. That matched the fourth quarter's revenue and was slightly better than the 11% growth rate that investors had expected to see. GAAP net income was higher from year-ago levels, but adjusted net income fell by nearly a sixth to $11 million. That produced adjusted earnings of $0.31 per share, which was $0.04 less than the consensus forecast among those following the stock.

Taking a closer look at Shutterstock's report, the growth rates that investors have looked to see in key metrics continued to decelerate ever so slightly. Paid downloads were up almost 6% to 43.5 million, while revenue per download was up just 5% to $2.91, slowing from its 6% pace in the fourth quarter of 2016. What hasn't slowed, however, is Shutterstock's appetite for new images and videos. Image counts climbed to 132 million, up 63% from a year ago, and video counts were up by more than half to 6.9 million.

One thing that continues to plague Shutterstock is strength in the U.S. dollar. Foreign currency movements weighed on the company's revenue growth, and the company said that sales would have climbed an additional two percentage points if the dollar's value had remained stable during the quarter.

Yet Shutterstock is doing its best to tap into all of its sources of potential customers. The company said that sales and download-count increases came from Shutterstock's e-commerce platform, which attracted new customers during the period. In addition, Shutterstock has kept trying to woo enterprise customers with more aggressive sales efforts, and from the company's growth, it's apparent that those efforts are paying off.

CEO Jon Oringer put the results into the proper context. "These strong metrics," Oringer said, "are a result of the work we are doing to transition Shutterstock from a stock image marketplace to a broader platform that provides individuals and enterprises with the various content types and tools needed to collaboratively design, build, and distribute their creative projects."

Shutterstock thinks that it will succeed in building a competitive advantage against other rivals. As Oringer noted, efforts to diversify Shutterstock's portfolio of content types and broaden its scope to offer a wider range of services to customers should differentiate the business from its competitors.

Nothing in Shutterstock's report reflected a major change to its guidance for the full 2017 year. The digital content specialist still expects sales of $545 million to $560 million, and operating income will be between $47 million and $52 million. Giving a boost to per-share figures is Shutterstock's ongoing stock repurchase program, under which the company bought back almost 450,000 shares, spending roughly $22.5 million in the process.

Shutterstock investors didn't have an immediate response to the news, as the stock didn't move in pre-market trading following the announcement. However, long-term investors will want to see the company follow through in turning sales gains into profit growth. Until that happens, it will be hard to have complete confidence in Shutterstock's broader strategic vision for the company going forward.