Please ensure Javascript is enabled for purposes of website accessibility
Log In Help Join The Motley Fool
Free Article
Join Nearly 1 Million Premium Members And Get More In-Depth Stock Guidance and Research
By Ashraf Eassa – May 3, 2017 at 10:15AM

A return to a familiar setting could rejuvenate this long-running first person shooter video game series.

Late last month, Activision Blizzard (ATVI -0.40%) formally revealed its upcoming Call of Duty game, known as Call of Duty: WWII. After a long string of Call of Duty titles set in either modern or futuristic settings, the company is doing what it said it would back on its February earnings call -- taking the franchise "back to its roots."

Here's why this I think that this title has the potential to rejuvenate Call of Duty sales. 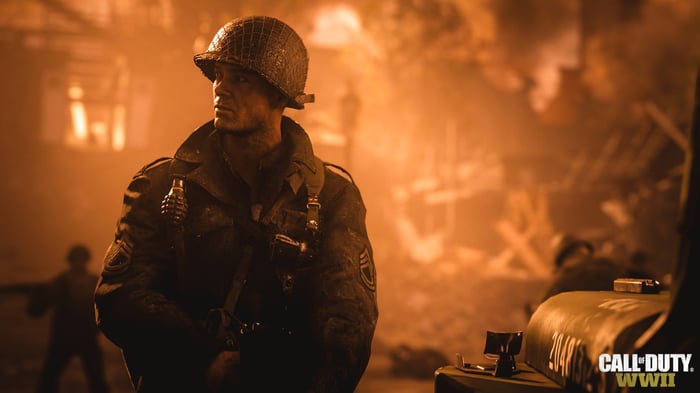 Infinite Warfare didn't do so well

That said, Tippl conceded that sales of the game didn't live up to the company's original expectations.

"It's clear for a portion of our audience, the space setting just didn't resonate," Tippl explained.

Tippl acknowledged that going the direction that it did with Call of Duty: Infinite Warfare was a risk, but that the top brass green-lit the project because the company "had a passionate, experience studio deeply committed to this direction" and that management considers it "important to consider the passions of [its] game teams in deciding what content to create."

"While it wasn't the success we planned, it allows us to protect core tenets of our culture that [CEO] Bobby [Kotick] discussed, empowering our talented teams to have the chance to pursue opportunities that they are passionate about," Tippl said.

That said, Tippl was eager to say that the 2017 Call of Duty game will "go back to its roots" (and now that we know that the setting is World War 2, this is quite literal) and that "traditional combat will once again take center stage."

At the end of the day, I think that going back to traditional combat and a World War 2 setting could prove to be a very compelling combination.

By simply ditching the space theme and going back to "traditional combat," the new game should prove a breath of fresh air for gamers who were disappointed/put off by Infinite Warfare.

What could really pay off, though, is the return to a World War 2 setting. Given how long it has been since there has been a Call of Duty game that took place in that well-worn setting (the last one was the 2008 title, Call of Duty: World at War), it has the potential to be quite a "fresh" setting.

Indeed, Activision Blizzard rival Electronic Arts (EA -0.69%) reported strong sales of its competing shooter game, Battlefield 1, back in January. That game eschewed the modern/futuristic setting of recent Battlefield games in favor of a return to World War 1, and that bet seems to have paid off.

Of course, a compelling setting is a necessary but insufficient condition for a game to succeed in the marketplace. But considering the popularity of the Call of Duty franchise, and considering that the Call of Duty games consistently get a lot of things right, there's certainly reason to be optimistic that Call of Duty: WWII will be a relative success for the company.