Please ensure Javascript is enabled for purposes of website accessibility
Log In Help Join The Motley Fool
Free Article Join Over 1 Million Premium Members And Get More In-Depth Stock Guidance and Research
By Lee Samaha – May 4, 2017 at 1:35PM

A look at the company's recent earnings and whether they were good enough to justify buying into the stock.

As you look across the industrials sector, Danaher Corporation (DHR -0.43%) jumps out, for two reasons. First, Danaher isn't your typical kind of cyclical industrial company. In fact, its collection of medical-focused and environmental businesses give it secular growth credentials, meaning its earnings can grow relatively uncorrelated to the ups and downs of the economy. Second, there's its valuation premium. 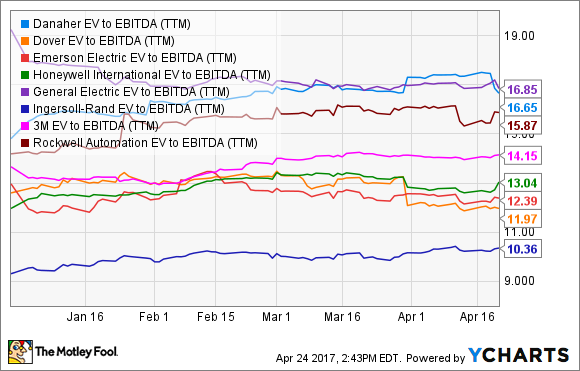 If the latter is going to be maintained, then the former needs to perform at least according to expectations. Let's look at the recent first-quarter results, then, to see if Danaher is on track.

The following chart of operating profit in the quarter shows how profits declined in diagnostics and dental, but as ever with highly acquisitive companies like Danaher, its quarter-to-quarter results will be affected by integrating acquisitions. Indeed, operating profit margin at three of the four segments was negatively affected by integrations. No surprises that life sciences was the odd man out. 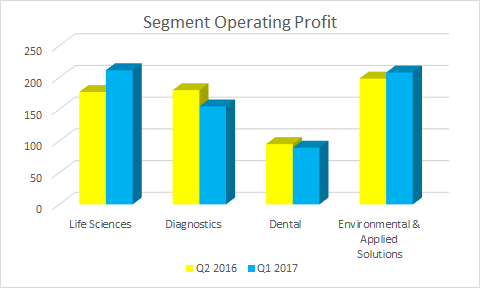 More details to follow, but in general, life sciences and environment and applied solutions had good quarters, diagnostics' underlying performance was mixed, and dental was weak.

Operating profit in diagnostics declined 14.2% even though revenue increased 17%. The reason? Segment operating margin declined from around 15.9% to near 11.7% from last year's first quarter. In other words, there was a 430-basis-point decline.  (One hundred basis points equals 1%.)

When discussing the issue, management explained that 190 points of the 430-basis-point drop was caused by the integration of acquisitions, including Cepheid. That leaves 240 basis points to account for, of which 100 basis points were due to adverse currency movements with the U.S. dollar and the yen. (The U.S. and Japan are major manufacturing centers for the company in diagnostics.)

On a more concerning note, CEO Tom Joyce talked of softer growth at Beckman Coulter in the quarter, and as it's a business with a large amount of high-margin recurring revenue, the impact on margin was significant -- around 75 basis points.

The rest of the decline was due to increased sales of automation equipment, which tends to be lower-margin and therefore reduces overall margin. However, equipment sales are obviously a spur for long-term recurring revenue growth from consumables used on the equipment.

Putting it all together, the only real long-term concern was the weakness in Beckman Coulter, but that may turn out to be due to timing issues that resolve themselves in future quarters.

The dental segment's performance was disappointing. Core revenue growth was flat, and operating margin declined 90 basis points, leading to a 6% year-on-year decline in operating profit to $89.4 million. The weakness is down to customers' destocking of dental consumables, and Joyce said the trend could go on: "We anticipate the weakness across our traditional consumables business will persist in the near term, leading to similar growth rates in Q2 as we saw in Q1 for the overall dental platform."

It's particularly disappointing because back in February, Dentsply Sirona Inc. (XRAY 1.46%) CEO Jeffrey Slovin talked of being "encouraged with what we saw in December" and "into January on the retail side." In this context, Danaher's commentary must raise concerns that Dentsply could disappoint with U.S. consumables in the coming quarter.

Danaher is a highly acquisitive company, with a track record of increasing productivity and margin of its acquired companies. In this context, the performance of its most recent major acquisition, molecular-diagnostics company Cepheid, is worth monitoring.

Clearly, Joyce thinks the integration is off to a good start. He lauded Cepheid's double-digit core revenue growth in the quarter and said that "the team has implemented numerous process improvements to increase productivity since acquisition." He added: "These initiatives have already generated meaningful operating margin expansion, and we are very encouraged by this early progress."

Danaher trades at a premium to its peers, and the question is whether it's deserved for a company that's set to grow EPS by 9% in the next two years. It's likely that Danaher will have to improve on its core revenue growth of 2.5% in the quarter to outperform going forward. Indeed, the question of future revenue drivers came up on the earnings call. Joyce replied by pointing out the positive impact of acquisitions and the possibility of an improvement in the dental segment.

In addition, Joyce argued that investments in research and development were likely to pay off in the long term. Danaher has room to increase investments as a share of revenue to reach the levels of around 6.3% seen in recent history: 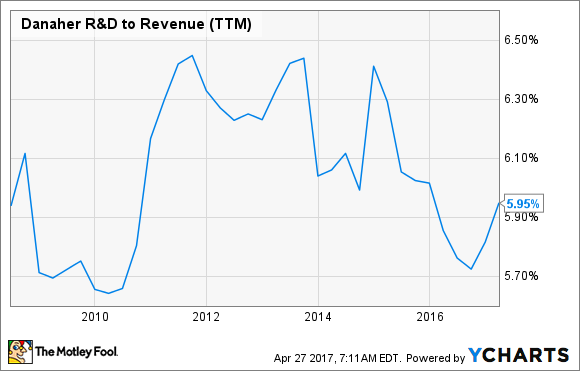 The dental segment's performance was a disappointment in the quarter, and the market's reaction is a testimony to what happens when highly rated stocks report less than stellar results, as the stock fell around 5.5% in the two days after earnings. Danaher is certainly an attractive stock, not least for its long-term secular growth prospects, but it might take a more pronounced dip in the stock price before a decent entry point comes about.