The trend toward connectivity is helping to drive volume growth in the semiconductor industry. In turn, companies that supply products to semiconductor manufacturers are also witnessing growing demand. That includes FormFactor (NASDAQ:FORM), a leading provider of probe cards that are used to test semiconductor chips and wafers.

Coming into Wednesday's first-quarter earnings report, investors were expecting FormFactor to post another strong quarter of revenue and profit growth thanks to last year's massive Cascade Microtech acquisition. Let's take a closer look at the company's first-quarter results to see how it performed during the period. 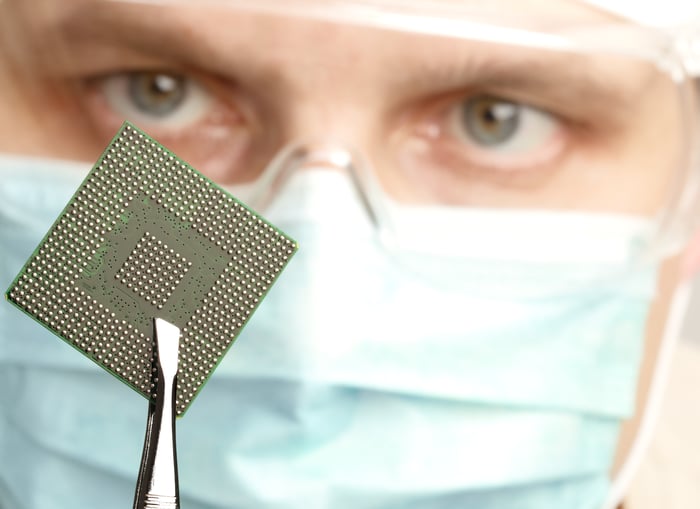 Mike Slessor, FormFactor's CEO, said that the company's strong start to the year was owed to "robust demand from all our customers."

He also expressed belief that the company is in a great position to keep delivering strong results and drive shareholder value:

We continue to see strong momentum across all our product lines, as our large customers continue their technology node transitions and new design introductions. We are in a stronger position than we were one year ago, and are benefiting from significant scale, diversified market drivers, and a broad portfolio of leading test and measurement products. Our focus remains on execution to drive continued revenue growth and EPS expansion.

Mike Ludwig, FormFactor's CFO, also reaffirmed that the company is "on track" to realize the $10 million to $12 million of annual cost savings that were promised as part of the Cascade Microtech deal.

During its call with investors, management stated that FormFactor is benefiting from strong end-market demand for semiconductors. They believe that this demand will stay robust for quite some time thanks to continued data center buildout, strong consumer demand for mobile devices, and increased semiconductor usage by automakers.

In response to that optimism, the company offered up following guidance for the second quarter 2017:

This forecast compared favorably to the $127 million in revenue and $0.23 in EPS that market watchers were expecting.

FormFactor's strong start to the year and upbeat guidance caused traders to significantly bid up the company's stock once trading started in the morning following this announcement. With revenue, margins, and profits expected to rise from here, it is easy to understand why investors are feeling good about this company's prospects.