Please ensure Javascript is enabled for purposes of website accessibility
Log In Help Join The Motley Fool
Free Article Join Over 1 Million Premium Members And Get More In-Depth Stock Guidance and Research
By Daniel B. Kline - Updated May 4, 2017 at 1:55PM

A just-released patent application shows that the company has a much better idea than its doomed Fire Phone.

To say that Amazon's (AMZN 3.58%) first attempt at entering the wireless phone market did not go well would be sugarcoating on the level of saying, "the Titanic's maiden voyage left room for improvement."

Fire Phone was a near-instant failure. It was a device nobody really needed sold at a premium price. Its only truly new feature was a sort of 3D way to look at products, a gimmick that was not enough to get people to buy it.

Now, with the success of its Alexa artificial intelligence devices, including Echo, Echo Dot, and Echo Tap, the company wants to get back into the phone business. This time, though, it's not looking to replace your smartphone. Instead, the company wants to make your existing phone much more useful by integrating it with its Alexa-powered, voice-controlled devices. 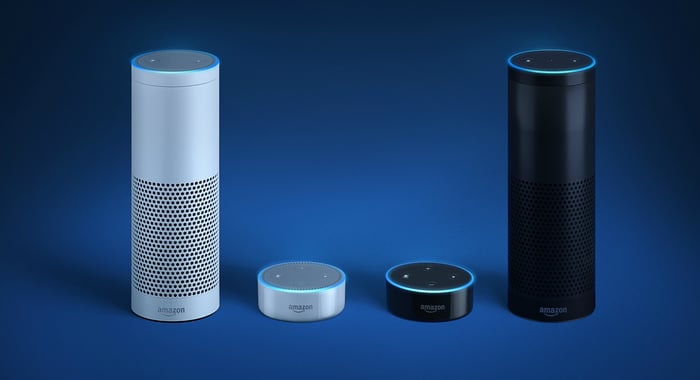 The company has filed a patent, which was first reported by GeekWire, showing how it will allow Alexa-powered devices to make and receive phone calls. In this case, the goal is not to replace your smartphone, but to integrate an existing phone number associated with a smartphone with the Echo family of devices.

The patent lays out how Amazon would let customers essentially attach their smartphone number to an Echo, or another Alexa-powered device, and then be able to make or answer calls using its voice-control technology. In addition the proposed system would allow for calls to be made or accepted only by authorized users which the Alexa-powered device would recognize (or not recognize) based on voice. Once a call was made or answered, according to the patent, the actual data will be routed as voice over IP or VOIP, similar to the way Microsoft's Skype handles calls.

Amazon flubbed an opportunity with Fire Phone. It could have established a place in the handset market by following the blueprint it used with tablets by offering a cheaper, but still high quality device. By not doing that the company essentially burned its customer base and diminished, if not eliminated, any interest its customers had in an Amazon phone.

This latest idea does not try to fix that mistake. Instead, it builds on the success of Echo and Alexa. Consumers are already using the voice-controlled virtual assistant for everything from playing music to controlling smart devices in their home. Amazon clearly wants to make Alexa the central control device for people's houses with Echo devices in every room.

Routing phone calls through Alexa-powered devices simply makes sense. It's useful technology like when some cable providers that also offer phone service allow you to have caller ID on your television screen. That's a minor benefit, but it's a useful one that can save people from pausing whatever they are watching to go look at the phone only to see that it's a call they don't want to take.

Using Echo and other Alexa-powered devices as a sort of phone hub fits with Amazon's plan to take over your home. It's a smart extension of the technology that makes people's lives easier. It will essentially make any room with an Echo an extension of your phone. It's easy to see how that would be useful and why existing Alexa fans would use the technology while people who do not have an Alexa-powered device might be tempted to get one because of this added feature.