Many investors focus only on the U.S. because they're most familiar with their home markets. But by doing so, one can miss out on big success stories. In Latin America, e-commerce giant MercadoLibre (NASDAQ:MELI) has enjoyed some of the same success that U.S. companies in the same sector have seen over time, and in many ways, MercadoLibre has more potential upside because of the relative youth of some of the region's consumer markets.

Coming into Thursday's first-quarter financial report, MercadoLibre investors were looking forward to impressive sales gains driven by improving conditions in the Latin American region. Yet even the most optimistic of investors was surprised by the growth rates MercadoLibre posted, as they have accelerated, in many cases, from recent quarters. Let's look more closely at MercadoLibre and what its results say about its future. 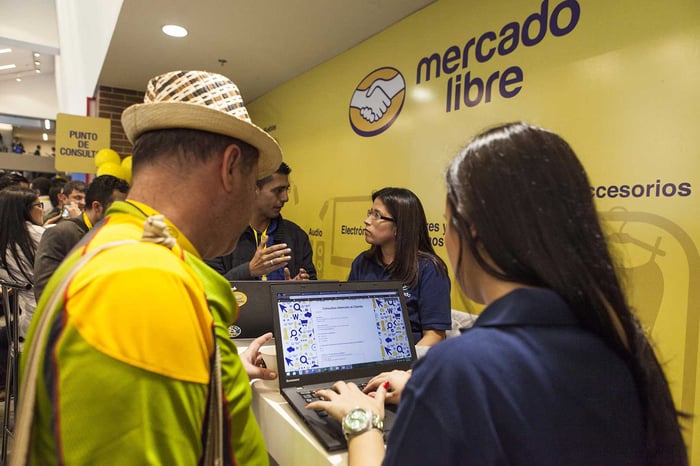 MercadoLibre keeps building up its business

MercadoLibre's first-quarter numbers topped even the rosiest of expectations. Revenue climbed by 74% to $273.9 million, which was even better than the already ambitious 57% growth rate most investors had expected to see from the company. Net income jumped by 60% to $48.5 million, and the resulting earnings of $1.10 per share put to shame the consensus forecast for just $0.79 per share on the bottom line.

Taking a closer look at the report, MercadoLibre's fundamental numbers showed the success of its entire business. In its namesake merchandise marketplace, MercadoLibre sold 53.2 million items, which was up by nearly two-fifths from year-ago levels. Gross merchandise volume gained 31% to $2.33 billion, with even bigger gains when you measure the numbers in local-currency terms. Unique buyer counts grew by a fifth, and registered user counts climbed to 182.2 million.

Meanwhile, the MercadoPago payment service was even more impressive in many ways. Total payment volume vaulted higher by nearly 90% to $2.60 billion, with a 60% rise in payment transactions to 44.1 million. More buyers and more sellers joined the MercadoPago network, and penetration rates for MercadoPago soared by more than 20 percentage points to 77%. In particular, payments made off-platform more than doubled from the year-ago quarter, with the company pointing to Brazil, Argentina, Mexico, and Chile as leaders in improving point-of-sale transaction volumes.

Shipping also played a factor in MercadoLibre's growth. The MercadoEnvios service got a nearly 60% boost in items shipped to 27.3 million, with shipment volumes in Mexico more than tripling from year-ago levels. Colombia saw nearly the same growth rate, and more than half of items sold marketwide used MercadoEnvios for shipping.

CFO Pedro Arnt was quite pleased with MercadoLibre's results. "We've kicked off the year with a strong first quarter," Arnt said, "sustaining the momentum from 2016, which was one of the best years in history for us." The CFO noted that MercadoLibre's efforts to disrupt existing technology practices have been successful, and the company intends to keep working in that direction going forward.

The way in which MercadoLibre has performed in line with the Latin American economy bodes well for the company if the region can stay on course. Mexico saw the biggest gains in items sold during the quarter, and the Mexican market is a huge one that MercadoLibre has opportunities to tap into more effectively. The rebound in Brazil has also been important for MercadoLibre, and given its relative size, the emerging-market giant will have to keep showing signs of improvement in order for MercadoLibre to reach its full potential.

Investors were quite pleased with how MercadoLibre did during the quarter, and the stock climbed almost 4% in after-hours trading following the announcement. Shares have more than doubled in little over a year, and so some might see the stock as being pricey. However, MercadoLibre's fundamental performance looks stronger than ever, and continued business gains could pick up even more momentum going into the future.