Last week when General Motors (NYSE:GM) unleashed its earnings data, it took analysts' estimates behind the woodshed and let them have it. GM set a first-quarter record, with revenue jumping nearly $4 billion higher to $41.2 billion. Its EBIT-adjusted $3.4 billion profit was also a first-quarter record, and its $1.70 in earnings per share decimated analysts' estimates of $1.48. With the earnings presentation in the rearview mirror, let's take a look at three important takeaways for investors.

After GM's earnings hit the news feeds, some questioned whether the automaker inflated its earnings through an inventory buildup. Investors should know that GM records revenue based on wholesale, rather than on retail sales. Why might that matter? Because it was well reported in the months leading up to the first quarter that General Motors' inventory had surged. GM's U.S. dealer inventory increased by 262,000 units, from 664,000 during last year's first quarter to 926,000 currently. 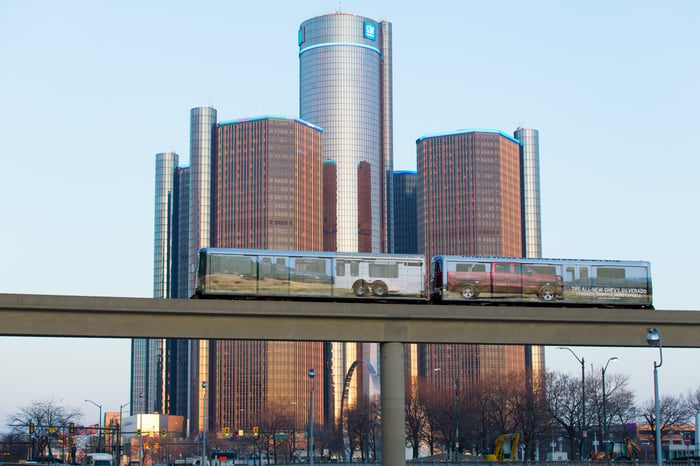 That increase was in large part due to building necessary inventory before plant changeovers and model launches. At first glance, investors might think the inventory buildup would inflate revenue and earnings, but GM's wholesale didn't jump drastically year over year and was, in fact, weaker than in the previous three quarters: 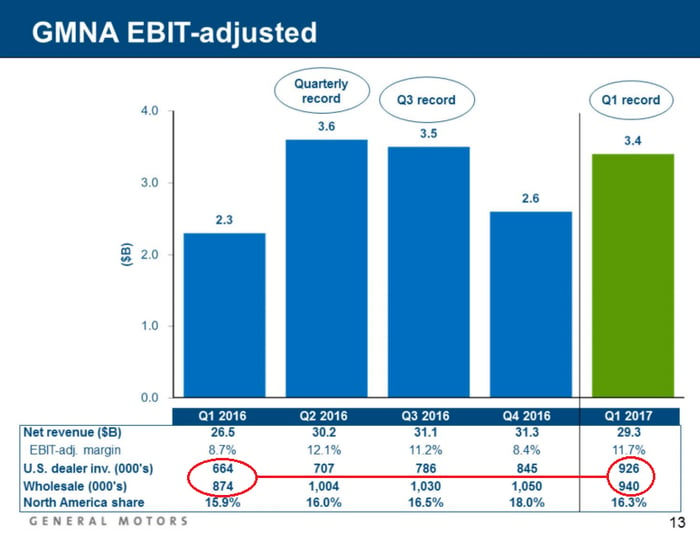 Further, the wholesale increase was driven by strength in full-size and mid-size trucks and SUVs, which combined to offset passenger-car weakness and rental-car activity -- daily rental wholesales were down 33,000 units.

Ultimately, this was a strong quarter for GM, and it had nothing to do with a buildout of inventory. Expect supply to trend toward 70 days by the end of the year.

No investor wants to hear that incentive spending is increasing industrywide. We've seen how destructive that trend can be from past incentive wars, and we can only hope that all parties have learned their lesson. Yet it's true that incentives are consistently climbing as we hover near the top end of this cycle. 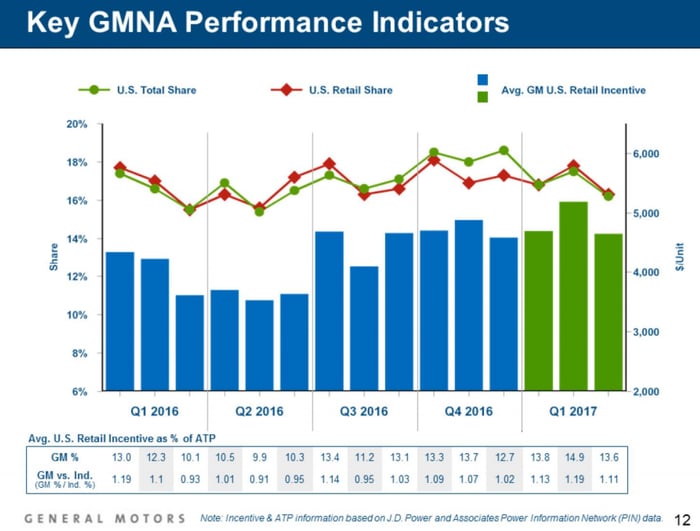 The chatter from CEOs of large dealership groups grew louder during first-quarter conference calls. Sonic Automotive's Jeff Dyke, executive vice president of operations, said March incentives "went berserk," according to Automotive News, "The incentives are all over the board," and will remain so, he said. "I expect to see a topsy-turvy incentive environment." Moreover, automakers "have a good amount of supply so they will continue to push incentives on us."

Dyke added that he believes that without incentives, the market's annual sales rate would be closer to 15 million, far below the roughly 17 million pace we're on, and it's an opinion that AutoNation's CEO, Mike Jackson, seemed to echo.

"If you level off incentives [and] leasing and bring inventories into line, then most likely you have some sort of modest decline in new-vehicle volume," Jackson said. In 2018, if automakers' production plans incorporate raising incentives even higher, "I don't know whether that's doable or not," he said, according to Automotive News.

Going forward, investors should follow GM's incentive spending as a percentage of average transaction price. It's possible we'll see that percentage move lower. The higher incentive spending was in part due to GM's older crossover-utility-vehicle lineup, which will be completely refreshed over the next few quarters. Put simply, new or refreshed vehicles sell better and need fewer incentives to move the metal.

One of the bullish arguments for General Motors in recent years has been the incremental profits that GM Financial (GMF) can quickly generate. Without selling a single incremental vehicle, GM can grow its top and bottom line through GMF, which is increasingly helping finance consumer purchases. In fact, during the first quarter, GMF as a percentage of GM retail sales jumped from 39% to 48% which helped push net revenue up to $2.9 billion.

GMF expects to double its pre-tax income from 2014 levels once it's fully penetrated into GM's retail sales. What investors will want to watch as we progress through 2017 is the negative impact of lower residual vehicle values. GM expects used-car prices to decline about 7% this year, with possible further declines in 2018, because of an increased supply of off-lease and used vehicles. But if prices decline too much, it'll eat into GMF's profit when it goes to auction the vehicles.

In all, this was an excellent quarter for GM investors, and the quarter's success had nothing to do with an inventory buildup. And while the automaker appears to be firing on all cylinders, savvy investors would be wise to keep an eye on incentive spending and residual values throughout the year. If those two factors remain reasonable, it's going to be another wildly profitable year for Detroit's largest automaker.