Optical-equipment maker Infinera (NASDAQ:INFN) has struggled in recent quarters to translate exploding consumer demand for bandwidth into financial success. The disconnect is being caused in part by internet providers choosing to go with rival offerings while they wait for Infinera's next-generation products to come to market. As a result, Infinera's top and bottom lines have been under a lot of pressure of late.

Coming into Thursday's first-quarter earnings report, investors were expecting Infinera's revenue to take another substantial hit and for its profits to once again evaporate. Were the company's results as bad as Wall Street had predicted? Let's dig into the details to find out. 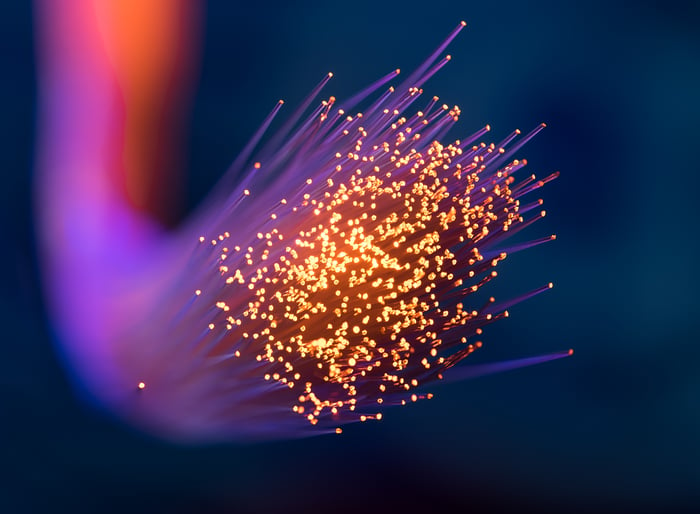 CEO Tom Fallon appeared to be pleased that the company's results came in at the top end of its guidance range. He also said that the company remains heads-down focused on bringing its next-generation "Infinite Capacity Engine" products to market.

However, on the conference call with investors, Fallon warned that the company is still dealing with a number of short-term demand challenges:

Recent discussions with customers suggest they are squeezing as much out of current network as possible even as bandwidth demand continues to grow. We are seeing this with our telco customers in particular, whose sequential revenues declined materially in Q1.

Fallon also stated that recent consolidation in the telecom and cable industry is changing some of the its customers' buying habits. These tendencies, combined with "heavy pricing pressure," are forcing Infinera to give pricing concessions in order to move its product out the door.

Fallon reaffirmed his belief that Infinera's new products will help to lower the company's cost structure and grow its market share. That's a big reason why the company said that it plans to continue investing aggressively in the business during this challenging period.

As a result of this heavy spending, management said that they are looking forward to launching a number of new products over the next few months. In particular, they talked about plans to launch new products geared toward the DCI, long-haul, metro, and subsea markets over the next two quarters.

However, management does not believe that company's financial fortunes are going to turn around until those new products become available. As a result, CFO Brad Feller forecast that the upcoming quarter was also going to be quite rough, and offered up the following guidance:

This forecast failed to live up to Wall Street's expectations, which is likely the reason why Infinera's shares dropped more than 5% in early morning trading on Friday.

Despite the murky operating environment and downbeat forecast, Fallon did his best to communicate to shareholders that he believes the company's best days lie ahead:

In closing, with the stream of new products coming out over the next few quarters and ramped up technology cadence, we're well positioned to gradually improve our financial results. Pent-up customer demand suggests that our new products are well suited to address evolving architectures that require the most scalable and cost-efficient networks. I look forward to delivering our new products to the market, continuing to provide the best customer experience in the industry, and ultimately capitalizing on the substantial growth opportunity we have ahead of us.