Noble offers more evidence that the offshore downturn may have bottomed out.

Shares of nearly every major offshore drilling company are up big on May 5, with shares of Atwood Oceanics, Inc. (ATW), Noble Corporation Ordinary Shares (NEBLQ), Diamond Offshore Drilling Inc (DO), ENSCO PLC (VAL), Transocean LTD (RIG 6.20%), and Seadrill Ltd (SDRL) up between 7% and 11% at 12:20 p.m. EDT.

Today's big news revolves around Noble Corporation, which released its first-quarter earnings after market close on May 4 and held its earnings call with analysts before market open on May 5.

Noble Corp reported revenue of $363 million in revenue and a loss of $1.24 per share. Revenue was down 41% from last year, but that wasn't a big surprise as the offshore sector is going through its biggest and longest downturn in decades. Its loss was heavily driven by a one-time non-cash tax item, totalling $260 million, or $1.07 per share. When adjusting for this non-recurring, non-cash item, Noble's quarterly loss would have been $0.15 per share. 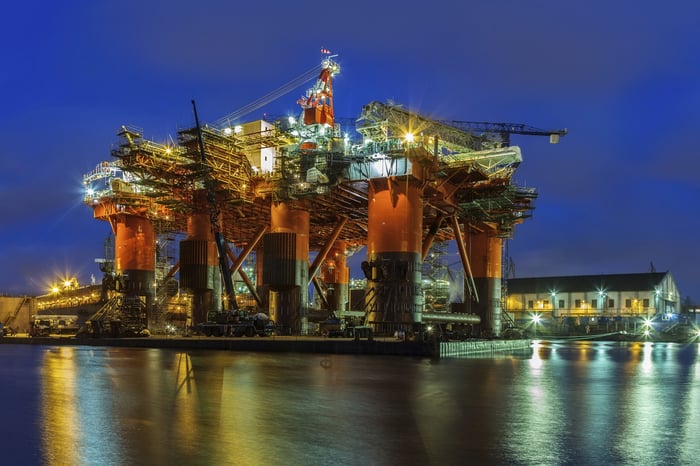 Noble's cash-based results were much better, with the company generating $142 million in cash from operations, and management remains confident that the company will generate positive cash flows in 2017, which will be used in part to repay debt.

In general terms, managements across the segment are increasingly optimistic that the worst of the downturn is coming to an end. Contract awards are picking up, and a significant amount of vessel rationalization has happened over the past couple of years. 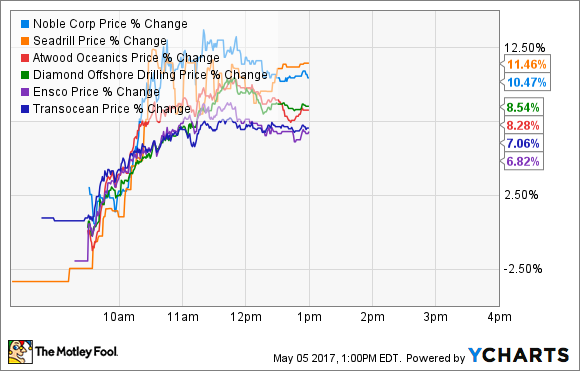 Investors should note that, just because there has been an uptick in contract award activity, the current state of the industry is still ugly. Many of the new contract awards have been extensions to existing work and haven't been putting idle vessels back to work, and there's still an oversupply of drilling vessels, even with significant scrapping and idling over the past 18 months.

And because of that, don't expect offshore drillers to start reporting markedly better results next quarter. 2017 is still likely to be a pretty ugly year overall since the majority of new contract awards won't begin until 2018. Frankly, offshore drillers as a group will probably generate less revenue in 2017 than last year.

Put it all together, and it's likely that we will see plenty more big-move days like today for offshore drilling stocks this year, and unfortunately, some of those days will be big moves down. Prudent investors would be served well to not "go big" on offshore just yet, but instead continue to monitor the industry, and invest in a prudent manner -- preferably based on evidence that the downturn is well and truly ending, and the industry is returning to growth after several very ugly years of contraction.