Please ensure Javascript is enabled for purposes of website accessibility
Log In Help Join The Motley Fool
Free Article Join Over 1 Million Premium Members And Get More In-Depth Stock Guidance and Research
By Evan Niu, CFA - May 5, 2017 at 1:58PM

Will OLED panels be a bottleneck for the next flagship iPhone?

Universal Display (OLED 1.07%) reported first-quarter results last night, and shares have promptly soared to new all-time highs today. Fellow Fool Steve Symington breaks down the headline numbers here, but the short version is the results were strong. Among other bullish signs, the company boosted full-year 2017 guidance by about $30 million at the midpoint.

Of course, easily the biggest potential catalyst for this year is the prospect of Apple (AAPL 1.62%) releasing an OLED iPhone. Like most Apple suppliers, particularly the smaller ones, Universal Display is undoubtedly bound by a slew of non-disclosure and confidentiality agreements, so the company can't say much about the iPhone maker possibly adopting OLED display technology for the first time. 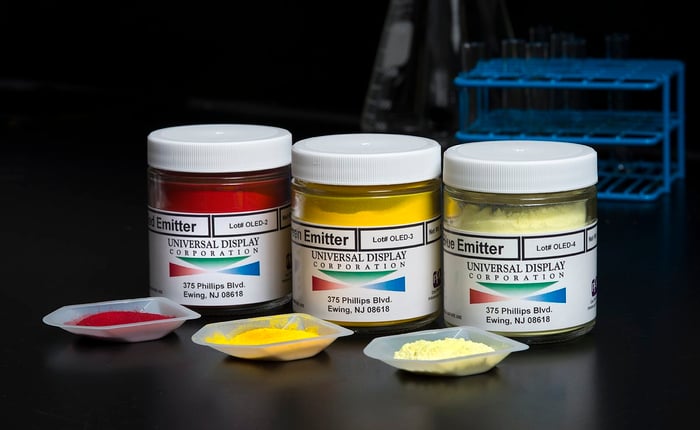 Still, there were some vague hints in the conference call. (These are excerpts instead of full quotations with all emphasis added.)

We continue to be encouraged by the growing customer discussions and pipeline activity that we are seeing in the OLED display and lighting markets. Since our last earnings call, the OLED landscape continues to expand from new product launches, new investments and robust amount of OEM design activity.

We're also growing our business to capture the tremendous market opportunities before us, consisting of new materials and technology, new customer agreements and new OLED commercial products, all of which we believe will contribute to our growth in the coming years.

We are expanding our customer collaborations, significantly stepping up our R&D efforts, increasing our technical field capabilities and fortifying our product development engine.

Goldman analyst Brian Lee tried to pry out some clues, asking, "So curious how you're thinking about potential upside drivers from here moving through the year, or if you would temper that type of analysis with a view that maybe the cadence for this year, first half versus second half will be very abnormal versus what you typically see."

Apple launches iPhones in the fall and that could contribute to a back-loaded year, which is what Lee is getting at here. However, CFO Sid Rosenblatt skillfully dodged that part of the question, reiterating that OLED trends are very bumpy and it's hard to make granular forecasts on a quarterly basis, which is why Universal Display only provides full-year outlook:

Thanks, Brian. And I clearly expected that question, to be honest, and it is a good one. We believe that it's still early in the OLED multi-year capex cycle and how it plays out quarter-to-quarter. It is not always predictable.

Susquehanna analyst Mehdi Hosseini asked about manufacturing capacity going forward: "You, recently, a couple of months ago, changed your contract manufacturing with PPG. And given the traction you have seen so far in the year and what you would expect over the next 12 to 18 months, do you foresee going back to PPG and actually increasing the minimum capacity or modifying it, given the strongest start to the year?"

Rosenblatt again: "But we're always looking at our capacity. We believe even with the increase, because we expected a significant increase this year, we have enough capacity in place today, and then with this new capacity to meet our needs for the foreseeable future."

Gabelli analyst Hendi Susanto asked about the rest of the year:

And then Sid, the new revenue guidance is $30 million higher. How much incremental guidance is attributed to the strong Q1 result? And how much is for your stronger expectation for the remaining of the year?

Rosenblatt noted that it's all tied to ramping capacity:

Our capacity, our revenue guidance is really fueled by what we sell, and that's based upon running capacity. We expect to see new capacity coming on in the second half and the first half of next year and the second half. And it really depends how quickly these are then turned on, actually producing product versus whether they're being ceded and worked on to start production. And those things are really out of our control, and that's some of the issue of pushing it in or pulling it out and how fast our revenues will grow. But really, it's based upon new capacity that's coming online that's actually making product.

To be clear, a lot of these comments are vague enough that they could refer to the general growing adoption of OLED throughout various markets. Display makers are investing billions of dollars in ramping capacity to accommodate demand for a wide range of end markets. But with expectations of an OLED iPhone running high, there has to be some Apple embedded in there.

There have been numerous reports that the OLED iPhone could be delayed for a variety of reasons, including technical challenges and component shortages. With what we know of the OLED capacity ramp and lofty volume requirements for flagship iPhones, OLED panels could be one of those bottlenecks.