Mindbody Inc. (MB), the company behind the online platform and mobile app by the same name that allows users to book fitness classes across various studios, saw its stock drop about 10% Friday after the market balked at the company's Q1 earnings.

For the first quarter, Mindbody reported sales of $42 million, up 32% year over year. That sales growth came from a rise in subscribers, which now totals just under 60,000, as well as higher average monthly revenue per subscriber. The company still reported a loss of $0.10 per share, though that was expected due to its aggressive investment and growth strategy. As for the stock's drop on Friday, it seems that the market is just giving back some of the company's high valuation that has grown extensively in recent quarters. 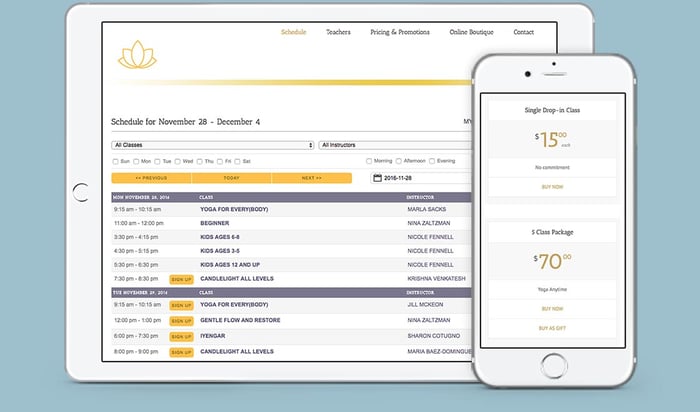 Mindbody has certainly been growing impressively in the last year, including new partnerships that have expanded its reach such as the deal announced in October that linked the Mindbody service into Under Armour's MyFitnessPal app, the more recent integration with Alphabet's Google that allows users to book easily after searching nearby studios, and the acquisition of the mobile technologies company Lymber. Mindbody co-founder and CEO Rick Stollmeyer said in the earnings release:

We had a strong start to the year, with positive early returns from our high value subscriber growth strategy, the nationwide rollout of our Google integration, and the timely acquisition of Lymber. These developments reflect our focus on accelerating business and consumer engagement across our platform, fueling the growth of wellness businesses worldwide and helping millions more people live healthier, happier lives.

Even after Friday's drop, shares are up around 78% over the last year. The company is still reporting net losses while it invests in continued growth, but it seems to be firing on all cylinders as it anticipates revenue growth of around 30% for full year 2017 year over year -- meaning that Friday's drop could be just a small speed bump in an otherwise impressive growth story.

Why Mindbody Is Skyrocketing

Can These Fitness Stocks Shape Up Your Portfolio?

2 Fitness Stocks to Shape Up Your Portfolio