Please ensure Javascript is enabled for purposes of website accessibility
Log In Help Join The Motley Fool
Free Article Join Over 1 Million Premium Members And Get More In-Depth Stock Guidance and Research
By John Ballard – May 6, 2017 at 2:05PM

What should investors expect from Take Two's stock over the next five years?

Let's review what happened to assist the stock's rapid ascent, and then we'll evaluate what return investors should expect over the next five years.

What happened in the last five years

Since the end of fiscal 2012 ending in March, Take-Two has continued to produce games from the same franchise brands -- Grand Theft Auto (GTA), NBA 2K, WWE 2K, among a handful of other staple sellers. The latest installment of the popular Grand Theft Auto series, GTA V, infused new meaning in the word "best-seller" with 75 million copies sold since its fall 2013 release. Most game companies are thrilled if a game sells up to 10 million copies. GTA V has consistently delivered big sales numbers more than three years after the game was released, and it still ranks, month-in and month-out, on the top ten video game sales charts.

In addition to strong sales of GTA V, Take-Two's gross margin has expanded from growing sales of online content, as opposed to reliance on physical sales of game discs which have a lower margin. In GTA V, NBA 2K, and WWE 2K players can purchase in-game virtual currency which unlocks certain features in games. Over the past five years, Take-Two's gross margin increased from 36% to 41.4% as revenue from in-game purchases (or digital revenue) increased from $107 million to $643 million.

Take-Two's cash flow improved along with gross margin, and the stock price soared. The company's market capitalization increased from $1.5 billion to $6.3 billion. Investors had previously valued the business based on its lumpy past and not on the positive changes the new digital distribution strategy would bring to the industry, which caused Take-Two and other video game stocks to be forgotten. 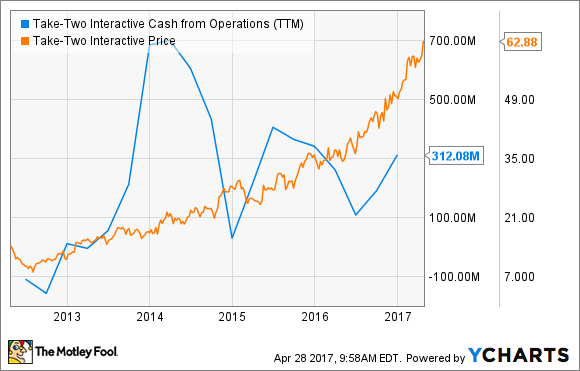 Investors who didn't catch the stock five years ago should take heart. Take-Two will continue to release new versions of popular games like Grand Theft Auto, which the company refreshes with a new story world and characters about every five years. By 2022, digital revenue should be a higher percentage of the company's revenue as the digital distribution trend continues to grow.

Take-Two is exploring other revenue channels that could make the company look a lot different (for the better) in five years. The company recently announced the acquisition of Social Point, which signals management's interest in pursuing the profitable growth of the mobile game industry. Take-Two also recently announced the NBA 2K eLeague to enter the wide-open world of e-sports.and characters about every five years. By 2022, digital revenue should be a higher percentage of the company's revenue as the digital distribution trend continues to grow.

The stock's PE ratio is 23 times expected earnings for fiscal 2018, in line with the S&P 500 Index. Analysts expect Take-Two to grow earnings 14% per year over the next five years, which I find a reasonable estimate given Take-Two has grown revenue at least as much over the last five years, and there are still opportunities across mobile gaming, e-sports, and in-game content to grow revenue and cash flow.