Consumers love being able to order gifts from online retailers like Amazon.com a few days before Christmas and have the parcels show up on their doorsteps in time for the holiday. After all, anything beats braving the crowds at malls in late December!

However, for package-delivery giants United Parcel Service (NYSE:UPS) and FedEx (NYSE:FDX), this trend has led to one nightmare after another. Some years they have been overwhelmed by demand, leading to missed deliveries. Other years, they have had too much capacity relative to the amount of last-minute shipping demand, driving up costs.

UPS is trying a new tactic to avoid these problems in the future. It will reserve the right to charge retailers if they reserve shipping capacity and then fail to meet their e-commerce targets. This will give retailers an incentive to meet (but not exceed) their forecasts.

One problem after another

2013 was the first time that UPS and FedEx were tripped up by volatile pre-Christmas e-commerce activity. That year, e-commerce shipments blew past UPS's forecast during the week before Christmas, while severe winter weather snarled operations. As a result, huge numbers of packages failed to arrive in time for the holiday. FedEx did somewhat better, but it also couldn't get all of its holiday packages to customers in time for Christmas.

In 2014, UPS invested heavily to avoid a repeat of the prior year's meltdown. As a result, it did a great job of delivering e-commerce packages in time for Christmas. However, it ended up with too much capacity, leading to lower productivity and lower earnings. 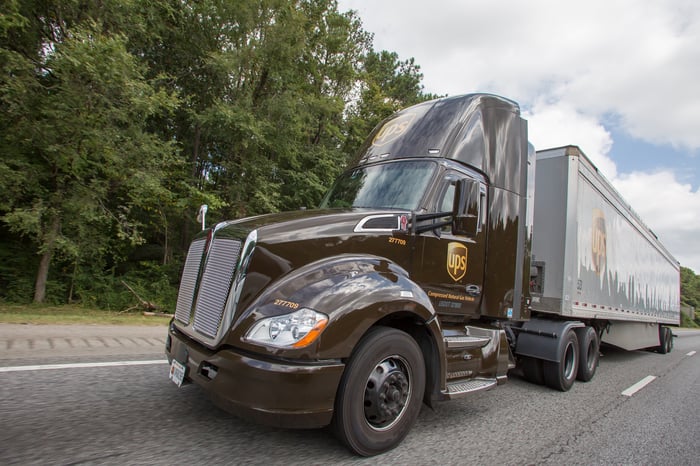 In the past two years, FedEx and UPS have continued to oscillate between having too little capacity (leading to delays) and spending too much to ensure that packages arrive on time. Both companies put a huge amount of effort into planning for the holiday peak season each year, but those efforts haven't paid off so far.

The difficulty of forecasting holiday demand has had a direct impact on profitability at UPS and FedEx.

In most industries, the busiest time of the year is also the most profitable part of the year. After all, if demand spikes relative to supply, it's usually possible to raise prices, capturing fatter margins from customers who need your product or service at that time.

By contrast, UPS and FedEx have typically reported below-average margins during the holiday period in recent years. For UPS, the worst year was 2014, when its operating margin fell to 11.7% in the fourth quarter, compared to 12.5% for the rest of the year. FedEx bottomed out during the most recent holiday period, with an operating margin that was more than 1 percentage point below its average for the rest of the year.

There are two main reasons that UPS and FedEx have struggled to succeed during the holiday season. First, e-commerce retailers have done a poor job of predicting how many packages they would ship, particularly in the last few days before Christmas. Second, it is more costly to deliver packages to homes than to businesses.

Both of these issues could be resolved through pricing changes. That's exactly what UPS intends to do. The company already charges retailers more if they blow past their peak-period volume estimates, forcing UPS to scramble to add capacity. Now UPS wants to charge them if they don't use all of the capacity that they have ordered, according to The Wall Street Journal.

This might seem overly harsh. However, high-volume shippers are already getting preferred pricing from UPS and FedEx. That only works if the package-delivery companies can still earn a reasonable profit. It's perfectly legitimate for UPS to demand an accurate forecast as a condition for getting the best price.

Ultimately, retailers have a much better ability than UPS and FedEx to forecast demand and then shape it through promotions, free shipping orders, etc. Up until now, they haven't been properly incentivized to try. UPS's new pricing policy will finally force e-commerce retailers to do their part in managing the chaos of last-minute Christmas shopping.