Please ensure Javascript is enabled for purposes of website accessibility
Log In Help Join The Motley Fool
Free Article Join Over 1 Million Premium Members And Get More In-Depth Stock Guidance and Research
By Leo Sun – May 8, 2017 at 12:00PM

These five companies control about 60% of the worldwide wearables market.

When Apple (AAPL -3.00%) launched Apple Watch in April 2015, many analysts believed that it would turn the niche market of smartwatches into a mainstream one. Yet initial shipments missed expectations, and the wearables market remained a specialty one, splintered between low-end fitness trackers, midrange sports performance devices, and pricier smartwatches.

But according to research firm IDC, that market is still growing. IDC recently reported that shipments of all wearable devices worldwide rose 16.9% year over year to 33.9 million during the fourth quarter of 2016, with Fitbit (FIT), Xiaomi, Apple, Garmin (GRMN -1.78%) and Samsung leading the market. 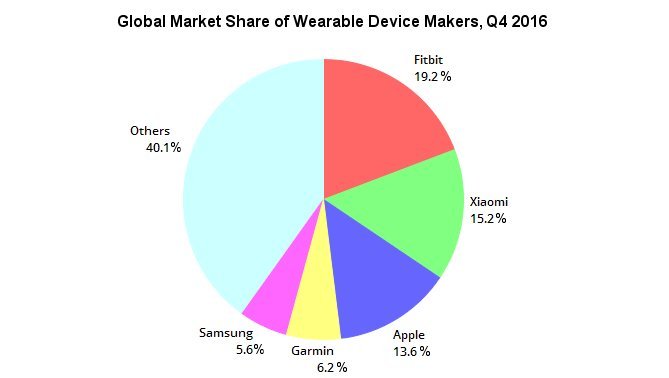 IDC reports that only Fitbit and Garmin posted declines during the quarter. Xiaomi's market share grew more than 6 percentage points on sales of its cheap Mi Band devices in China. Meanwhile, Apple benefited from the launch of its Watch Series 2 last September, and Samsung gained ground with its Gear S3 Classic and Frontier devices.

However, the rest of the market remains fragmented, with smaller players all vying for a piece of the pie. But there's still room for these companies to grow -- IDC estimates that worldwide wearables shipments will rise from 102.4 million in 2016 to 213.6 million in 2020.