Please ensure Javascript is enabled for purposes of website accessibility
Log In Help Join The Motley Fool
Free Article Join Over 1 Million Premium Members And Get More In-Depth Stock Guidance and Research
By John Ballard - May 8, 2017 at 2:37PM

By understanding what has driven its incredible run, investors will better know what to expect going forward.

There have been few better investments over the last five years than owning shares in any of the three major U.S. video game companies -- Activision Blizzard (ATVI -0.44%), Electronic Arts, and Take-Two Interactive. Activision stock in particular has returned nearly 350% over that period, compared to just a 70% gain for the S&P 500.

After such a bullish run, some of you may be wondering whether it's too late to take a position in the company. Let's take a look at where Activision Blizzard stood heading into 2012 to set the stage for what investors can expect in the next five years and beyond.

What happened over the past five years

In April 2012, Activision stock traded at a P/E ratio of about 14 times. The video game company had closed out 2011 with revenue of $4.8 billion and an operating margin of 30%, leaving investors with $0.93 per share on the bottom line.

The company had three notable franchises heading into the year: Call of Duty, Skylanders, and World of Warcraft. That May, Blizzard released Diablo 3 -- the No. 1 selling PC title of 2012.

In the ensuing years, the company would go on to add Overwatch and Destiny to its franchise portfolio, along with top-grossing mobile games Candy Crush and Bubble Witch following its acquisition of King Digital Entertainment in early 2016.

Today, Activision Blizzard has a broad lineup of popular titles that gamers spent 43 billion hours playing in 2016 -- helping the company generate total revenue of $6.6 billion with an operating margin of 35%. Earnings per share more than doubled over the five-year period. The valuation went up as well, as its P/E expanded from 14 to 40 times earnings, meaning investors today are willing to pay far more than they did in 2012 for a piece of the company's growth and leadership within the gaming industry. 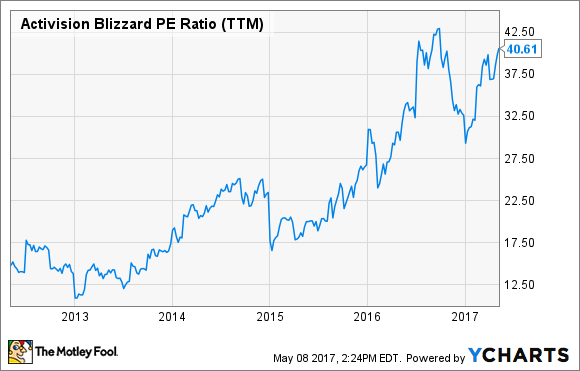 Now a $40 billion company, I wouldn't expect the stock to generate another 300% return for investors by 2022. But these are major opportunities for Activision that will be help push the stock higher:

As much as the company has changed since 2012, you can bet Activision will evolve even further by 2022. Though its P/E multiple will not expand the same way it has over the previous five years, continued strength on the company's top and bottom lines should reward investors nonetheless.