Please ensure Javascript is enabled for purposes of website accessibility
Log In Help Join The Motley Fool
Free Article
Join Nearly 1 Million Premium Members And Get More In-Depth Stock Guidance and Research
By Tyler Crowe – May 8, 2017 at 9:53AM

Even though Archrock Partners' results have maintained their downward trajectory, management thinks a turnaround will happen very soon.

2017 is slated to be the turnaround year for Archrock Partners (NASDAQ: APLP). Increased drilling activity means that demand for natural gas compression services will be back en vogue once those new wells get hooked up to transportation infrastructure. Unfortunately, that turnaround didn't show up in the company's most recent earnings release.

Based on comments from management, though, there are some reasons for investors to celebrate this past quarter and look forward to the rest of the year. Here are the company's latest results and what happened lately that should give investors confidence that better days are just around the corner. 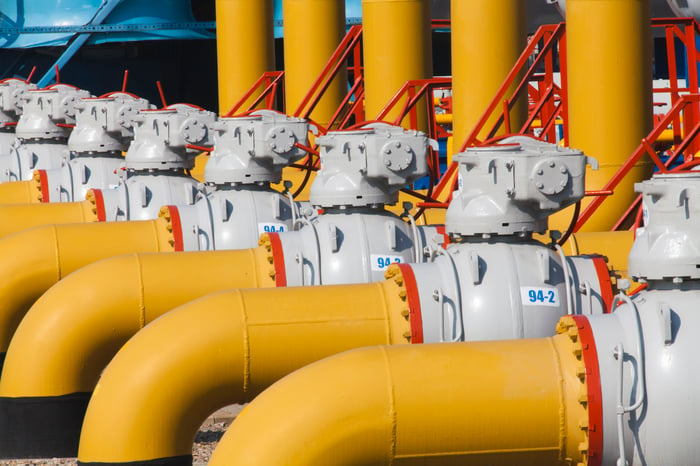 Archrock Partner's results for the quarter are more or less a continuation of what we've seen in recent quarters: flat to modestly declining revenue and adjusted EBITDA as fleet utilization remains unchanged and gross margins per horsepower per month falling slightly. At the end of the quarter, Archrock Partners and its parent company, Archrock (AROC 2.06%), reported a utilization rate of 87%. That result isn't bad by any metric, but the high amounts of idle compression equipment mean that contract rates are low today. As more and more of Archrock's and its competitors' assets get deployed, per-horsepower margins should improve.

Since Archrock Partners is a master limited partnership, distributable cash flow is always a metric to follow. First-quarter distributable cash flow did drop a bit compared to the fourth quarter, but its distribution coverage ratio for the quarter was 1.8. This means there was more than enough cash coming in the door to cover its current payout. Last year, Archrock's management cut its payout in anticipation of a dip in horsepower utilization and to pay down debt. Looking back now,  we can say management made a good decision.

Archrock Partners ended the quarter with $1.35 billion in debt. So far, management hasn't been able to make much of a dent in that debt load. Hopefully, as demand for horsepower picks back up again, we will see the company's overall leverage decline.

Despite Archrock Partners' less-than-inspiring first-quarter results, CEO Brad Childers did give investors some hope that things will start to turn around soon. Here's what he said as part of the company's most recent press release.

Archrock Partners' revenue continued to stabilize in the first quarter. During the quarter, industry activity improved considerably, and we captured our highest level of new orders since the fourth quarter of 2014. Relatedly, higher order activity drove an increase in labor and make-ready expense as we prepare to meet higher demand.

As a later cycle participant, we believe 2017 will be a transition year as the current cycle turns from contraction to expansion. During this transition period, we will work to balance cyclical lows in pricing and utilization with the need to invest in resources and equipment to meet the expected growth ahead."

Archrock Partners' strong new order activity as well as the expected increase in demand for natural gas has given us confidence in the long-term positive outlook for our business. Our existing idle capacity, as well as investment in our compression fleet, will enable us to capitalize on opportunities as the predicted growth in U.S. natural gas production occurs.

It's hard not to be ambivalent about Archrock Partners' stock. On the one hand, the company's current payout doesn't look to be at risk of another cut: Management expects a quick pickup in business over the next couple quarters, and its distribution yield of 7.16% looks compelling. Conversely, it has 87% of its fleet already deployed, parent company Archrock only has another 500,000 horsepower -- 13% of the two entities' combined fleet -- to drop down at this point, and it will take some time for Archrock to chip away at that debt load before investors can expect a distribution increase.

I think it is a little too soon to make a definitive investment decision when it comes to Archrock Partners. It's certainly a company worth watching because of the positives, but investors should stay on the sidelines until we see a material decrease in leverage.