Masimo announced its first-quarter 2017 results on May 3. Shareholders again had reason to remain enthusiastic about the stock and its future prospects. Here's why. 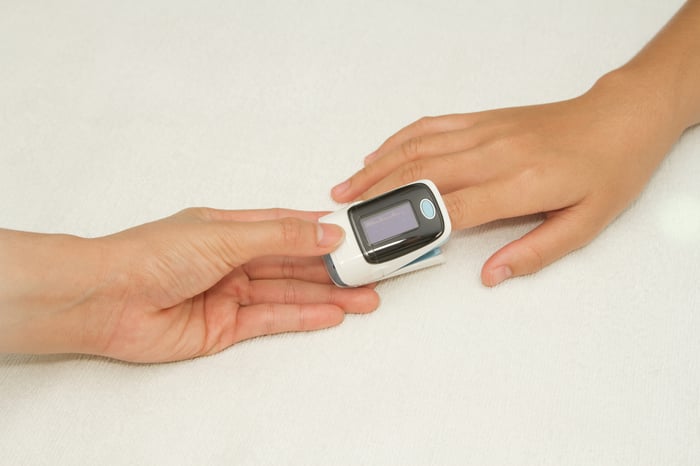 Net income in the first quarter received a big boost from a $1.3 million tax benefit, whereas a relatively large tax hit of $10.3 million was incurred in the prior-year period. Masimo's improved revenue situation also trickled down to the company's bottom line.

Masimo's spending increased somewhat during the first quarter, but there doesn't appear to be any reason for concern. Total operating expenses increased by 5.3% year over year. Higher selling, general, and administrative costs (SG&A) were the primary factor behind this increase, although Masimo's research and development spending also rose from the prior-year period.

The company shipped around 47,900 SET pulse oximeters and rainbow SET pulse oximeters during the first quarter, not counting handheld and finger oximeters. With those shipments, Masimo now has a worldwide installed base of oximetry products of more than 1.5 million units as of April 1, 2017 -- a 6.1% increase from a year ago.

Masimo ended the first quarter with cash and cash investments totaling $343.8 million. That's a nice jump from the $306 million reported at the end of 2016. During the first quarter, Masimo generated $15.4 million in operating cash flow. The company also received $27.3 million in proceeds from stock option exercises.

Masimo chairman and CEO Joe Kiani said, "Our first-quarter results illustrate the strength in our business as we continue to see broad adoption of our products on a global basis, evidenced by our third highest quarterly product shipments on record."

Thanks to its solid performance in the first quarter, Masimo now has greater expectations for the rest of 2017. The company raised its full-year 2017 financial guidance.

After the nice start in the first quarter, investors have reason to expect good things ahead. As has been the case for a while, the biggest risk for Masimo is its relatively high valuation. Any bump in the road could cause the stock to fall. For now, though, Masimo's business appears to be in great shape.