Please ensure Javascript is enabled for purposes of website accessibility
Log In Help Join The Motley Fool
Free Article
Join Nearly 1 Million Premium Members And Get More In-Depth Stock Guidance and Research
By Anders Bylund – May 8, 2017 at 11:29AM

The fastest wireless network in America is not who you'd expect.

Some high-speed wireless networks are faster than others. According to studies by the network quality specialists at OpenSignal, one operator beat them all in the summer of 2016 -- and the fastest rival could not quite catch up in the February 2017 report.

You already know that Verizon Communications (VZ 0.29%) failed to win this speed test, despite its repeated claims of having the largest and fastest network in America. So the winner, obviously, was...

It's true. The self-proclaimed Un-carrier beat Verizon's average 4G download speeds last August by 2%. Their speeds were within the margin of error in February, after substantial upgrades from both Verizon and T-Mobile. And in terms of the older 3G network standard, T-Mobile won both tests by a crushing margin:

T-Mobile's repeated victories only look more unlikely when you consider the fact than AT&T and Verizon are wielding much larger infrastructure budgets. T-Mobile has invested $8.2 billion in network maintenance and improvement over the last four quarters, while Big Red poured $17.3 billion into capital expenses and AT&T's budget soared to $23.8 billion. 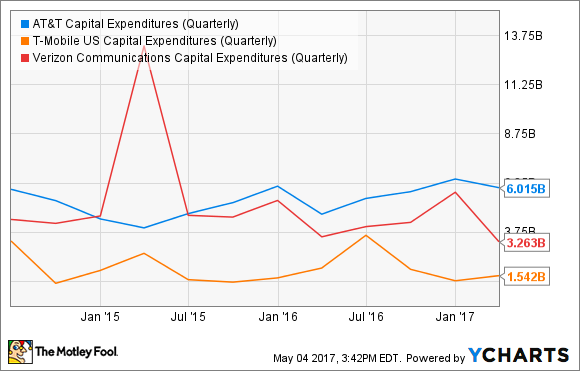 Verizon started upgrading its network last summer with LTE-Advanced technologies. When paired with a supported handset, these signals can run much faster than the aging LTE standard. This effort boosted Verizon's download speeds by 26% in the New York market, and helped the company catch up to T-Mobile overall.

T-Mobile's recent rise in the speed rankings comes from the use of 700 MHz radio spectrum licenses, acquired from Verizon in a $2.4 billion deal three years ago. Following up on that success story, T-Mobile outbid all comers in the Federal Communications Commission's latest spectrum auction. The $8 billion T-Mobile invested in that auction of 700 MHz licenses will quadruple the Un-carrier's low-band capacity.

That's a sharp break from T-Mobile's former reliance on lower-quality signals in frequency bands near 1.8 GHz and 2.2 GHz. The 700 MHz band is where AT&T and Verizon built their empires. Real estate in this space is worth its weight in, well, smartphones. When T-Mobile starts to install network hardware to take advantage of these plush new licenses, connection speeds and network quality will continue to rise.

It's not necessarily about making the largest network investments, but the smartest ones. In that light, T-Mobile's rapidly improving network starts to make sense.

The next challenge, of course, is to convince consumers that the quality improvements are real -- and worth switching networks for. Expect a T-Mobile marketing blitz in late 2017, driving these points home as the new 700 MHz connections start to show up.

T-Mobile's Free Cash Flow Is About to Explode
401%