Freeport-McMoRan Inc. (NYSE:FCX), one of the world's largest copper miners, has just been hit by another big problem that could take down its Grasberg mine in Indonesia, a key asset. That's come just as the miner was starting to make some real headway on the debt and oil fronts, two other issues that have been dimming its outlook. Although Freeport is likely to muddle through all of this, these are the three biggest challenges the company is facing today.

Freeport's Grasberg mine in Indonesia is the problem that's making headlines at the company today. And rightly so, since this single mine represents nearly one-third of its copper reserves and virtually all of its gold reserves. The issue is complex and political, but it stems back to a rule change that the Indonesian government made earlier this year that is, essentially, leading to reduced production, higher costs, and a slowdown in growth spending at the mine. 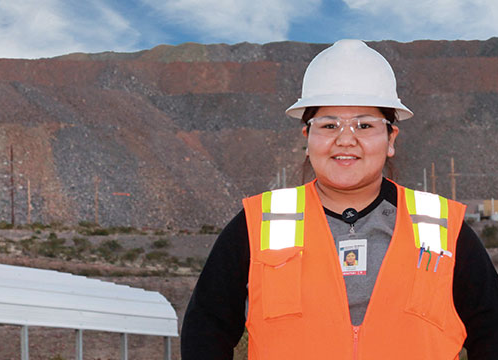 Both sides lose out if Grasberg isn't running. So there's a good chance that something mutually agreeable will be worked out. However, what that looks like is far from clear at this point. Until there's more progress toward a solution, Freeport's Indonesian problems will likely continue to weigh on the stock.

Freeport-McMoRan bought oil companies McMoRan Exploration Co. and Plains Exploration in 2013. At the time, oil prices were high and the deal was seen as a way to diversify the business. That didn't work out as planned (see point 3), but the investment left a huge debt overhang.

To put some numbers on that, in just one year, Freeport's debt went from $3.5 billion to $20 billion. Debt stayed at around that level until 2016, when the miner finally started to make some headway in its efforts to repair the balance sheet. Via asset sales and stock issuances, the company pared its debt by around 40% last year. That's impressive progress, but long-term debt still stood at around $13 billion at the end of the first quarter. Meanwhile, long-term debt makes up around two-thirds of the capital structure -- a heady figure for a company in a commodity industry subject to often severe price swings. 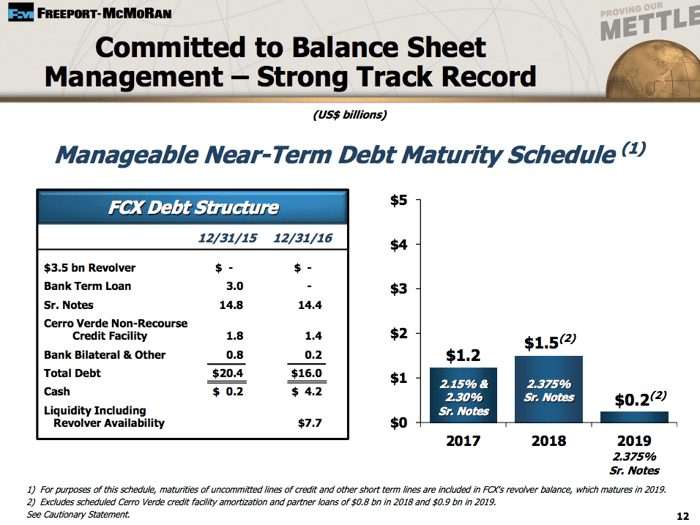 In other words, Freeport is making good on its promise to improve its financial foundation but more needs to be done.

When oil prices are over $100 a barrel, just about any oil project looks good, and Freeport's move to expand into the oil space seemed like a reasonable diversification effort. When oil prices started to fall in mid-2014, however, the miner's oil move quickly turned into a problem. The debt it took on to get the deal done, as noted above, was one issue. But so, too, was the oil business itself since it was burning more cash than it was generating.

Freeport has been able to sell a large portion of the assets it acquired, helping to pay down debt. But it still has a small oil business, even though it barely got a mention in the company's first-quarter earnings release and conference call. The only update was that the remaining oil business made a slightly negative contribution to EBITDA, information only shared in response to an analyst question.

Even if you forget the debt that's left over from the deal, Freeport clearly still has to figure out what to do with what's left of the oil business. Until it's sold or starts adding to EBITDA, it's a problem that investors need to watch.

The troubles at Grasberg in Indonesia are only partially within Freeport's control. And while both sides of that fight benefit from the mine continuing to operate, it's a complex political mess right now. Since Grasberg is such an important asset for Freeport, this is the challenge that's taking center stage -- and perhaps rightly so, since it's hard to predict what will happen from here.

That said, Freeport has been working hard, and making important headway, on its debt and oil issues. But these self-imposed problems still aren't completely behind the copper miner. Investors need to continue to monitor the company's heavy debt load and the progress it's making in getting out from under the oil business. Unfortunately, Grasberg just complicates these efforts. If you own or are looking at Freeport today, watch all three of these issues closely.