Nucor Corporation (NYSE:NUE) has weathered the deep steel-industry downturn better than peers AK Steel and United States Steel. But that doesn't mean Nucor, one of the largest U.S. steelmakers, doesn't face challenges. Here are three of the biggest ones that cloud the company's outlook today.

One of the issues domestic steelmakers have been grumbling about for years is low-priced steel imports into the U.S. market. Nucor again highlighted this issue during its first-quarter conference call, with CEO John Ferriola noting that steel imports "remain at a stubbornly high 25% share of the U.S. market." The issue, however, is price. U.S. steelmakers claim that the imports are being sold at below production costs or subsidized by foreign governments. 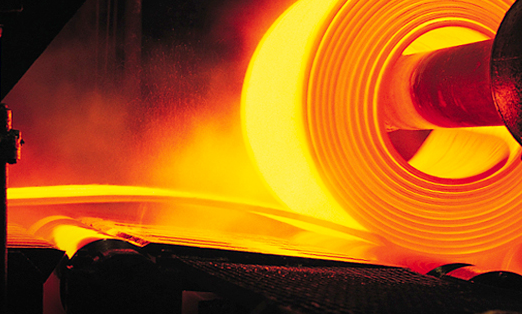 There's no question that this is a bad thing. Worse, it can take years and huge amounts of legal and political effort to get any kind of redress. But this is only a symptom of the bigger problem. There's just too much steel being produced in the world, with China being the largest offender when it comes to overproduction. As Chinese steel moves around the world, it has a ripple effect on every country.

Until overcapacity issues are resolved on a global scale, most importantly in China, Nucor and its peers will be forced to play a cat-and-mouse game to protect their businesses from low-priced imports. And it's a problem that isn't going away anytime soon.

Nucor is huge in the United States, where it does virtually all of its business. It's recently been expanding into Canada and Mexico, but those are still early-stage efforts. So the strength of the U.S. market is vital to Nucor's future.

To be fair, Nucor's product line is diverse, and it has leading industry positions in most of the steel niches it serves. That allows it to shift investment into the areas with the best prospects. However, the United States is a mature market that's been growing slowly since the deep 2007-to-2009 recession. That's about when the current steel downturn started. 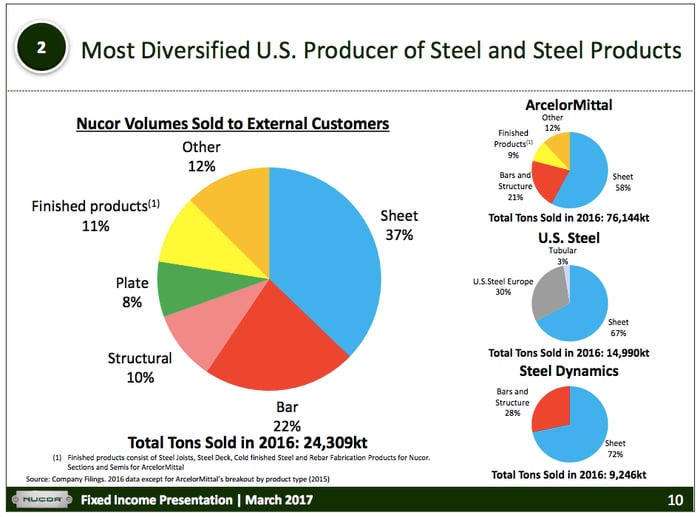 Nucor is the most diversified steelmaker in the U.S. market.  Image source: Nucor Corporation

Nucor has been using the downturn to buy assets that expand its footprint. (Integration issues, by the way, are another concern to keep in the back of your mind.) Expanding its industry reach should help it prosper when the U.S. steel market improves. But until it expands materially beyond the U.S. market, domestic growth is going to be a key driver of results. In the recent past, that has been a drag on performance, and nothing, at this point, suggests that the dynamic is changing.

Some investors are excited about the economic future under President Trump, but it remains to be seen if he can coax the U.S. economy out of its moribund state. And even if the economy picks up, mature markets tend to grow more slowly than emerging economies. So modest economic growth in the U.S. market is likely to be something Nucor has to deal with for a very long time.

Keeping costs in check is vital when dealing with a slow-growing market that's facing oversupply issues. Nucor's highly flexible pay structure, which makes use of profit sharing, is a key part of the company's ability to remain nimble. But it's also been working hard to integrate vertically.

For example, Nucor isn't just one of the largest steelmakers in the U.S. market; it's also one of the largest steel recyclers, through its David J. Joseph division. In addition, it's been working on building direct reduced iron (DRI) plants and has interests in natural gas. These are all basically good ideas, but they don't always work out as planned in the near term. 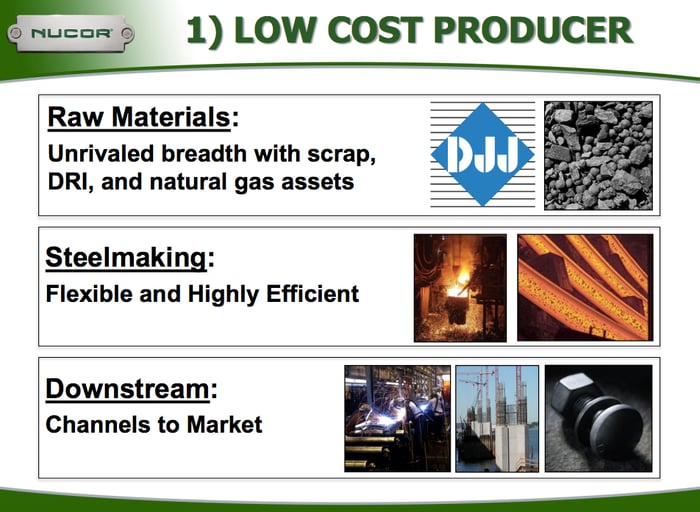 Nucor is "unrivaled" in scrap, DRI, and natural gas, but it's been a mixed blessing so far.  Image source: Nucor Corporation.

For example, the start-up of the DRI plants has gone less than smoothly. That's not exactly unexpected, as they are complex projects, but temporary shutdowns have hit earnings in recent years. And the natural gas effort, which partnered Nucor up with Encana (NYSE:OVV), was recently restructured because persistently low gas prices made the investment unnecessary. Nucor has essentially put this project on hold.

To be honest, Nucor looks to be making the right cost-saving moves. But doing the right thing doesn't always lead to the expected results or provide returns within the time frame expected. So these efforts appear positive, but you have to take them with a grain of salt and view them as long-term investments.

I own Nucor shares and believe strongly that it's the best steel company in the United States, if not the world. But it's going to continue to struggle, like all of its peers, with global overcapacity in the steel industry and slow growth in its core market. It's done a great job so far navigating through these troubles, but they aren't over. And then there are the investments Nucor has made to protect itself from rising costs in the future. They haven't proved to be all that valuable so far. I expect they will eventually work out as planned, but until they do, Nucor's DRI plants and natural gas assets will be a drag on results.