The oil market is breathtakingly massive, at an estimated $1.7 trillion per year. For perspective, that's larger than all of the world's raw-metals markets combined. However, because of the market's enormous size, there are plenty of opportunities for smaller players to make a mint. Three gems hidden in plain sight because of their smaller size amid the oil market's behemoths are Centennial Resource Development (NASDAQ:CDEV), Golar LNG (NASDAQ:GLNG), and NOW Inc. (NYSE:DNOW). Here's why we think these pint-sized players could deliver big-time returns for investors.

Getting back into the game

Matt DiLallo (Centennial Resource Development): In December 2013, Mark Papa retired as CEO of leading shale driller EOG Resources (NYSE:EOG), after spending 32 years building it into one of the best oil growth companies in the country. However, that retirement didn't last long, as not more than a year later he joined energy-focused private-equity company Riverstone Holdings, which subsequently tapped him to lead Silver Run Acquisition, formed for the purpose of acquiring oil and gas assets during the downturn. 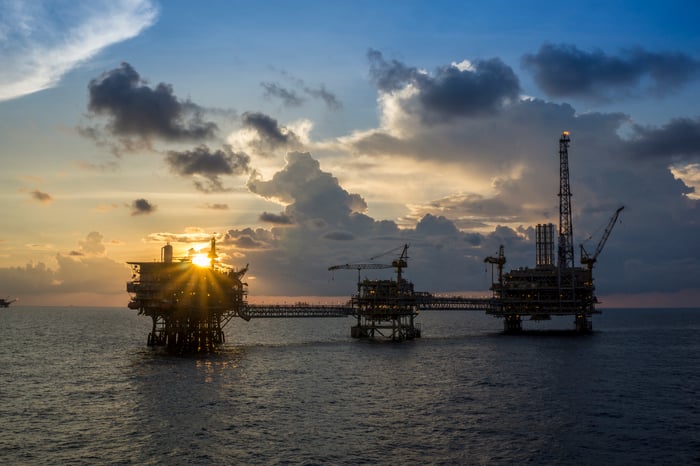 Silver Run Acquisition completed its first deal last fall, buying control of Centennial Resource Production, which it renamed Centennial Resource Development. The draw was Centennial's position in the red-hot Southern Delaware Basin, which is rich in oil and gas resources that producers can extract at low costs, leading to excellent drilling returns at current oil prices.

Not long after that, Centennial bought Silverback Exploration, expanding the company's acreage position in the region and adding more than 600 future drilling locations, which provide it with a runway for future growth. Meanwhile, earlier this month the company bought GMT Exploration, adding another 255 identified drilling locations. As a result of these deals, the company estimates that it can grow production from a mere 5,757 barrels per day at the end of last year up to 60,000 barrels per day by 2020, which is an 80% compound annual growth rate. Meanwhile, the company expects to do that while maintaining peer leading costs and a healthy balance sheet, which should fuel strong returns.

While Mark Papa is well known within the industry, investors have yet to uncover the gem he's creating at Centennial by replicating what worked so well at EOG over the years.

Tyler Crowe (Golar LNG): We have seen a lot of technological advancement in the oil and gas industry as of late. We're able to access previously inaccessible shale reservoirs, we can develop deepwater sources for much less, and liquefying natural gas at lower cost allows us to ship a product what was once mostly limited to overland pipeline transport. Those advancements are all coming to a head with the development -- and subsequent lower cost of -- floating LNG liquefaction facilities.

Golar LNG was formerly an LNG transport specialist, has shifted strategy, and is now converting its former LNG transport vessels into floating liquefaction and regasification facilities. These smaller, mobile facilities have some distinct advantages over land-based liquefaction plants, because they can make stranded offshore natural gas -- natural gas reservoirs with ample resources, but not enough to justify building an on-land LNG facility -- into a viable, monetizable form of LNG. According to Golar and its OneLNG partner, Schlumberger, about 40% of the world's natural gas supply can be classified as stranded.

Through its OneLNG partnership with Schlumberger, Golar LNG will market a service that will enable producers to develop, produce, and monetize stranded gas reserves quickly. One example of these projects is the recently signed 20-year development deal that will work on a 2.6 trillion-cubic-foot reservoir off the coast of Equatorial Guinea. This project and other ones Golar has signed in the past 12 months combine for $7.9 billion in contract value and are expected to generate $450 million in EBITDA annually.

Golar LNG is certainly going to be a slow-burn kind of investment. It still has to build several of these liquefaction and regasification vessels and then develop those stranded gas reservoirs. Those with the patience to wait, however, may find Golar to be a company worth putting on one's radar.

A critical cog in the industry machine

Jason Hall (NOW Inc.): One look at oil and gas equipment and parts distributor NOW Inc.'s revenues since it was taken public shows just how painful the downturn has been: 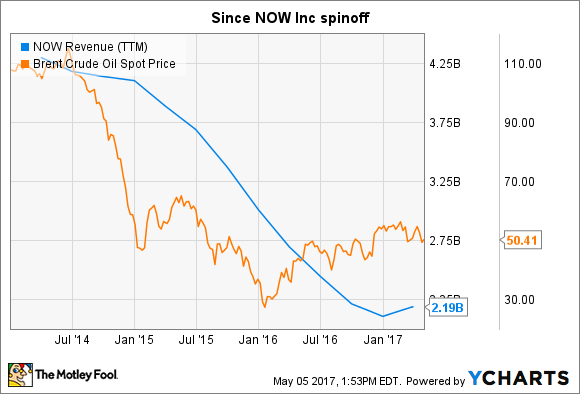 As essentially a middleman, NOW Inc. is subject to the whims of the energy industry in a big way, riding the ebbs and flows of demand up and down. And while that makes it the kind of company that you need to keep a closer eye on than others, it can also present an excellent opportunity for timely investing. And it's looking as if now could be one of those chances.

Over the past several quarters, NOW Inc. has seen its revenue start turning around. Its first-quarter sales were up 15% from last year, and up 17% sequentially. This solid improvement helped the company cut its GAAP loss by two-thirds and its adjusted loss by half.

The biggest driver for NOW is the recovering drilling activity in North America, driving demand for consumable parts and drilling equipment supplies higher. Over the past couple of years, nearly three-fourths of North American land rigs have been idle, and the return to work of more of that fleet is an excellent thing for NOW Inc.'s prospects.

The best time to buy heavily cyclical stocks is near the bottom, when there are signs of a recovery, which we now have a couple quarters' worth. There's risk that too much new production too quickly could send oil prices -- and production -- back down again. But if you're willing to take on that risk, NOW Inc. is worth buying.