Steel is a competitive and highly cyclical industry, but Nucor Corporation (NYSE:NUE) stands out from the pack in a number of ways. As you watch the stocks of competitors like United States Steel Corporation (NYSE:X) get pummeled on bad news, don't make the mistake of selling Nucor, too. Here are three terrible reasons to sell this U.S. steel industry giant.

U.S. Steel, which recently saw its stock fall 27% in a single day, has lost money in seven of the last eight years. That traces back to the start of the lengthy steel industry downturn that began during the 2007 to 2009 recession. AK Steel (NYSE:AKS), meanwhile, has fared even worse, losing money in eight of the last eight years. Nucor last dipped into the red in 2009, like just about every other major steel company, but it has been profitable since. 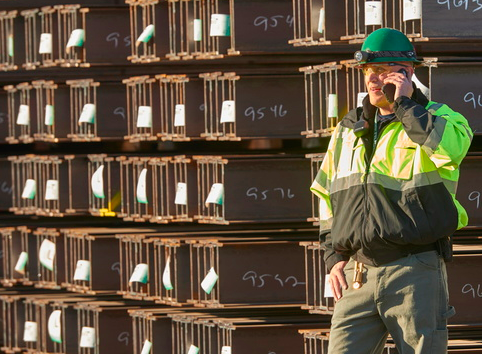 If you're looking at Nucor, you shouldn't get caught up in the sea of red ink in steel land, or the bad news about U.S. Steel. One of the key differences is that Nucor has a highly flexible cost structure. For example, it makes use of electric arc furnaces, which are, to simplify things, easier to turn on and off than the blast furnaces used by AK Steel and U.S. Steel.

Nucor also has a unique profit-sharing pay plan that rewards employees during the good times, but asks them to share in the pain during bad times. That helps to keep costs in check, too. In other words, Nucor's business is designed to adjust quickly to changing market conditions. The benefits of that are clear on the bottom line.

One of the biggest problems Nucor and its peers are facing today is global overcapacity. Imports still account for a relatively high 25% (or so) of the U.S. market. The problem is that the foreign steel pouring into the United States is being sold at low prices, which U.S. steel makers claim to be below cost (known as dumping). The industry is hitting back with trade disputes.

The flood of cheap imports has helped push a number of major U.S. mills, like U.S. Steel, into the red. But Nucor's flexible cost structure has allowed it to remain profitable. In other words, it's dealing with the imports just fine. But there's more to this story. Nucor is also one of the most diversified steel makers, with notable production higher up on the value chain. Yes, commodity steel businesses are getting hit hard by cheap foreign imports, but Nucor does far more than that. 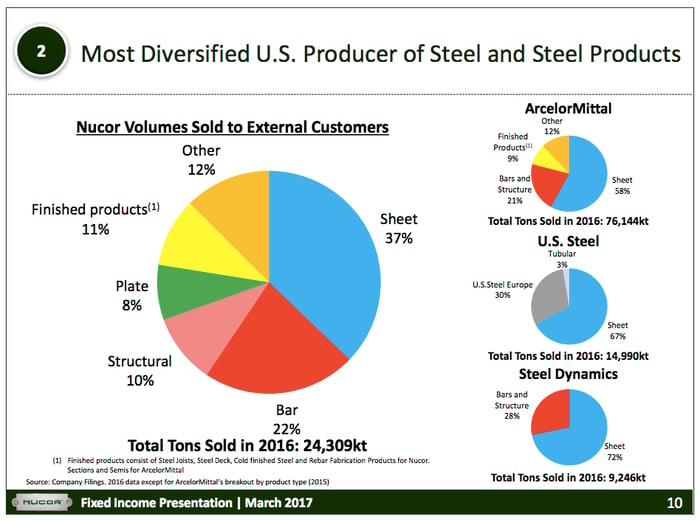 Nucor is one of the most diversified steel makers in the United States. Image source: Nucor Corporation.

Nucor's collection of specialty steel assets buttresses it against the influx of cheap commodity steel. So, while competitors flounder, this is another area in which Nucor's strength shows through.

Another reason some investors might avoid Nucor is that it predominantly operates in the mature U.S. market. That, ultimately, limits growth opportunities. There's some validity to this concern, but Nucor understands the issue. For example, it didn't just start life as the most diversified U.S. steel mill -- it used bolt-on acquisitions to create that diversification over time. That's a core focus of the business plan.

Here's the thing: As the company has added new businesses, Nucor, as a whole, has continued to grow. In fact, Nucor has historically used downturns like the one that started during the last recession to invest in new assets. The end result is a company that's experienced higher highs over time and higher lows, as the cash flow graph below shows. In other words, despite the fact that the U.S. is a mature market, Nucor has managed to keep profitably expanding its business via opportunistic acquisitions. 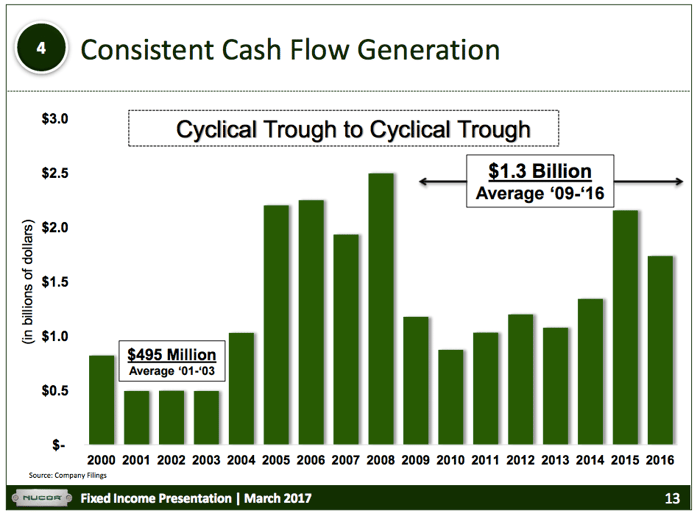 Nucor's cash flow has been higher during this downturn than it was during the last one. Image source: Nucor Corporation.

And Nucor has recently put a little more effort into expanding beyond the U.S. market. For example, it's working on a joint venture in Mexico, and it has acquired steel assets in Canada. Those are still North American businesses, but they expand the company's reach into new countries. That, in turn, could give Nucor new markets in which to opportunistically expand in the future.

Not playing the same game

Nucor is one of the largest U.S. steel makers, but it does things very differently than its peers. The biggest example of this is Nucor's ability to remain solidly profitable while so many other steel makers have been bleeding red ink. That's helped along by its diversification, use of downturns to grow its business, focus on flexible electric arc steel mills, and its unique pay structure. It's alarming to watch companies like U.S. Steel fall nearly 30% in a single day, but don't let that tarnish your view of Nucor. Nucor really is a different kind of steel company.