It has not been a good year for Macy's (NYSE:M), Target (NYSE:TGT), or Dollar General (NYSE:DG). All three have been under pressure from price competition, food deflation, rising wages, and e-commerce. Everyone knows retail is tough business, but this has been a brutal period. 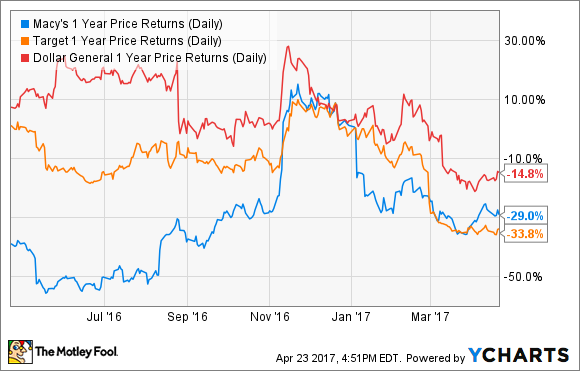 Still, these retailers are household names, and the stocks have been punished, pushing multiples down and dividend yields up. Are they fodder for value vultures, or traps in plain sight?

(Note: The revenue loss in Target compared to its same store sales was due to the sale of its pharmacy division, so its total revenue loss was overstated.)

As one can see, there's no free lunch in today's market. For those looking for big dividends, Macy's looks to be the way to go; however, its dividend is not exactly safe, as the 75% payout ratio (the percentage of net income paid as dividend) is high. Its sales are declining on an absolute basis due to store closures, as well as on a same-store basis (sales in the same store compared to a year ago).

Those looking for more safety and growth might look at Dollar General. It has a more conservative payout, is posting revenue growth, and appeals to a low-income segment unlikely to stray in a recession.

Somewhere in the middle is Target. It's the cheapest on a price to earnings basis, but is also posting same store sales declines; however, the declines aren't as bad as Macy's, and the payout ratio of just over 50% means the dividend is likely sustainable. To get a full sense of what is going on, let's look at what these companies are doing to try and turn things around. 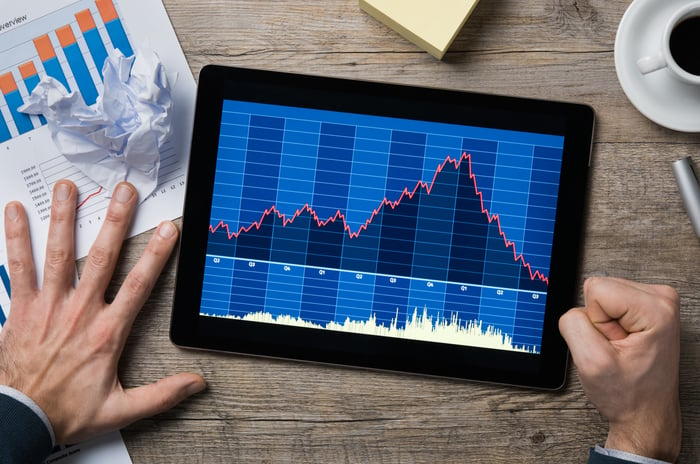 Macy's is in a precarious position due to its presence in malls, and collection of various full-price brands. The good news is that the company realizes the predicament it's in. Macy's closed 66 stores last year, while also planning an additional 34 closings over the next year or two. The company will use the proceeds to upgrade its existing stores in an attempt to create a better experience. Moreover, the company opened its own discount brand called Macy's Backstage, similar to Nordstrom (NYSE:JWN) Rack or discount retailers TJ Maxx (NYSE:TJX). The theory is if Backstage attracts discount-seeking customers, they might also browse the full-priced items nearby. The company is also experimenting with renting out part of its owned stores to other retailers.

Target's turnaround is no less comprehensive, but rather than close stores, Target is heavily investing in lower prices, e-commerce, remodeled stores, and new stores as well. The company aims to open smaller stores in urban settings and college campuses, and remodel 600 stores with new layouts with two entrances – one for customers looking to pick up in store, and another for those who want to shop in the store. The company aims to utilize its large 1800 store footprint effectively as an asset for last-mile e-commerce.

Dollar General's strategy is not a big shift, though it is being aggressive on opening stores, with 1,000 planned for this year, a 7% increase. The company recently acquired defunct Walmart (NYSE:WMT)Express stores,  and is also acquiring 232 Dollar Express stores from private equity firm Sycamore Partners. The company is also incorporating dollar-based budgeting, but plans to pay its store managers more in an attempt to reduce turnover and reaccelerate store performance. Like everyone, the company is also investing in digital, and adding more fresh produce and healthier offerings.

Truthfully, I'm having a hard time seeing a clear winner. Dollar General appears to be the safest, and has the best position as a low-cost retailer, but also has the highest valuation and lowest dividend.

If looking for a big turnaround and upside, Target looks better than Macy's. Target has a good dividend and lower payout, which means the company has flexibility and can increase the dividend if the turnaround works. Moreover, its large and conveniently located 1800 stores could serve as a great omni-channel base if executed correctly.

Still, Target is not without risks. Walmart just sold Walmart Express to Dollar General, revealing the challenges of opening a new line of smaller-format stores. Moreover, while Target is not a pure discount retailer, it is lowering prices. As one analyst noted, investing in price when one is not a pure discounter is tough to pull off. The company's plans will also put a strain on earnings -- management guided for $3.80-$4.20 in earnings per share, down from $4.58 this year, as the company shifts to the new business model.

I'm still scanning the retail landscape for bargains, but not finding any risk-free merchandise.

Are Any of These Beaten Up Retailers Worth Buying? @themotleyfool #stocks $TGT $DG $M $WMT $AMZN $JWN $TJX Next Article
Current