Please ensure Javascript is enabled for purposes of website accessibility
Log In Help Join The Motley Fool
Free Article Join Over 1 Million Premium Members And Get More In-Depth Stock Guidance and Research
By Danny Vena - May 9, 2017 at 10:00AM

The Oracle of Omaha recently announced that he had sold 30% of Berkshire Hathaway's holdings of IBM shares. Is he losing faith in this tech giant?

Warren Buffett, chairman and CEO of Berkshire Hathaway Inc. (BRK.B 1.81%) (BRK.A 1.79%), is one of the world's best-known investors, and investors devour the company's annual letter to shareholders seeking to benefit from his investing acumen. Berkshire's shareholder meeting has been called the "Woodstock of Capitalism," and its annual meeting is one of the largest of its kind. Attendance was down about 10% in 2016 from the record 44,000 that attended in 2015, but that only meant thousands more watched a live-stream of the event.

When this legendary investor speaks, investors tend to listen. To that end, Buffett revealed to CNBC on Friday that he sold shares in International Business Machines Corporation (IBM 2.06%)

"I wouldn't say the specific earnings disappointed me, but I would say that I don't value IBM the same way that I did six years ago, when I started buying," Buffett told CNBC. "I've revalued it somewhat downward. As a matter of fact, when it got up over $180, we actually sold a reasonable amount of the stock ... about 30%." 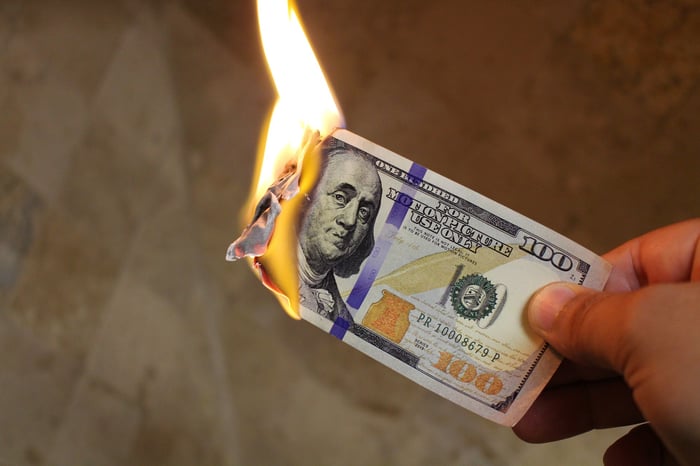 He indicated that most of the stock was sold in the first quarter and some in the second quarter. That appears to have been a prescient move by the Oracle of Omaha: In its most recent quarter, IBM reported revenue that fell 2% year over year, to $18.16 billion from $18.68 billion in the prior year quarter, while also missing investors' expectations of $18.39 billion.

This marked the 20th consecutive quarter of falling revenue as the company's legacy businesses continued to stagnate. Earnings per share, while beating expectations, have also been falling since peaking in 2013.

IBM has been counting on newer businesses in cognitive and cloud computing to drive growth, but that growth has been slow to materialize. These new areas, which IBM refers to as strategic imperatives, grew 12% over the prior-year quarter, now accounting for 42% of the company's revenue. However, they haven't grown quickly enough to offset falling revenue in the legacy portion of the company's sales.

Why the big sale?

When asked why he sold 30% of Berkshire's stake in IBM, Buffett acknowledged the slow progress in the company's turnaround and the competition in the area:

It hasn't done what, five or six years ago, I expected would happen or what the management expected would happen. If you look back to what they were projecting and how they thought the business would develop ... they've run into some pretty tough competitors. ... [T]he earnings have been obviously disappointing ... and I don't think the quality of earnings has improved.

He specifically mentioned the cloud business, though IBM claims to have taken the crown as the global leader in enterprise cloud, with $3.5 billion in revenue from that segment in its most recent quarter.

The biggest question investors will be asking is If Buffett's selling, should they follow suit? Berkshire has held its investment in IBM for more than five years, and Buffett has revisited its investment thesis. The shares were sold near their recent high, and Buffett mentioned selling the shares with the highest cost basis to harvest tax losses.

It's important to note that he did keep the remaining 70% of the shares, and he said "I don't think we'll be selling" when asked.