Overall, the aerospace industry has done extremely well in recent years, and that has supported aerospace component producer and supplier TransDigm Group's (NYSE:TDG) business. Yet even in an environment in which new aircraft sales are extremely strong, occasional rough patches can come up, and companies like TransDigm have to find a path through stormy times to come out ahead in the long run.

Coming into Tuesday's fiscal second-quarter financial report, TransDigm investors were hoping that the company would be able to sustain its recent levels of growth. The company fell short of investors' expectations in terms of sales, and growth rates generally slowed, but TransDigm still felt comfortable boosting its full-year guidance for the second quarter in a row. Let's look more closely at TransDigm Group to see how it did and what's ahead for the company. 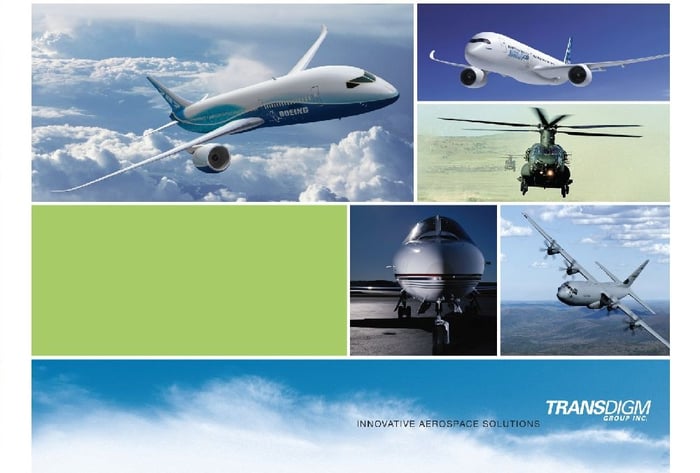 TransDigm throttles down a bit

TransDigm Group's fiscal second-quarter results reflected some of the conditions in the aerospace industry right now. Revenue was up a bit less than 10% to $873.2 million, which was well short of the $892 million in sales investors had wanted to see. Adjusted net income of $168.9 million was up just 5% from year-ago levels, although the resulting adjusted earnings of $3.02 per share were $0.01 better than the consensus forecast among those following the stock.

Looking more closely at TransDigm's numbers, the extent of the industry slowdown showed up in other areas. Organic sales gains remained positive but amounted to just 1%, leaving acquisitions responsible for about 90% of the rise in revenue for the company.

From a segment perspective, TransDigm dealt with adverse conditions in one key business. The commercial aftermarket segment saw pro-forma revenue drop 1.5% from year-ago levels, with the company citing a tough comparison against the fiscal second quarter of 2016. However, other businesses were relatively strong. Commercial original equipment manufacturing saw a 2% sales rise, again reflecting the strength in demand for new aircraft. The defense unit saw even stronger sales gains of 3%, and TransDigm said that strong bookings during the period were encouraging.

Meanwhile, TransDigm worked to control costs, but with mixed success. The company got a big win in gross margin, which improved by nearly three percentage points to 56.2%. Overhead expenses also represented a slightly smaller percentage of revenue, but interest expense climbed by a third following a similar-sized increase in the amount of debt TransDigm has taken on.

TransDigm CEO Nicholas Howley tried to put the quarter in perspective, especially for the lagging aftermarket figures. "Most of our commercial aftermarket businesses had higher revenues versus the prior year quarter," Howley said, and "additionally, year-to-date commercial aftermarket bookings are running significantly ahead of shipments." The CEO noted as well that overall performance has been generally in line with expectations.

TransDigm remains confident about its future. As Howley put it, the trends the company has seen "contribute to our confidence in the growth for the second half of our fiscal year."

TransDigm made small upward adjustments to its guidance for the full 2017 fiscal year. It raised the bottom end of its revenue guidance by $10 million, now expecting between $3.53 billion and $3.57 billion in sales this year. On the earnings front, TransDigm raised its range by $0.03 to $0.07 per share, with the new expectation set at between $12.09 and $12.33 per share. The company still expects commercial aftermarket sales to climb the most for the year, up mid-single-digit percentages compared to a slower pace of growth in commercial OEM and defense.

Stock buybacks played an increasingly large role for TransDigm during the quarter. Repurchases accelerated to almost 1.52 million shares, spending about $340 million. With a new $600 million program having taken effect in March, TransDigm has about $410 million left in its authorization for future purchases if it so chooses.

TransDigm investors weren't entirely happy with the deceleration in growth, and the stock fell nearly 3% in pre-market trading following the announcement. Yet with the stock having regained all of its lost ground since getting negative comments from Citron Research analyst Andrew Left, the more important thing for TransDigm to focus on is how to make the most of the ongoing opportunity in the aerospace industry in the months and years to come.