After updating investors on its progress in the first quarter, shares in Portola Pharmaceuticals (NASDAQ:PTLA) rallied 12.8% higher Tuesday.

Portola Pharmaceuticals' reported first-quarter financials after the closing bell on Monday, and while the company is still a long way from reporting a profit to investors, it did provide encouraging insight into its progress in making the leap from a clinical- to commercial-stage company. 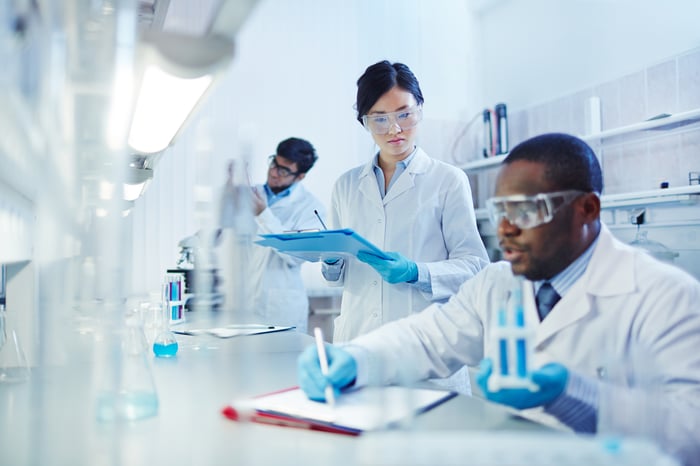 First, let's review the first-quarter financials. In Q1, the company reported that operating expenses totaled $45.7 million, down from $73.6 million last year. The drop isn't unexpected because one of the company's large phase 3 trials wrapped up last year. Research and development costs fell to $30.6 million from $58.8 million in the quarter, and SG&A expenses for the quarter were pretty much unchanged at $15 million.

Now, let's discuss what's moving this stock higher today. In the company's report, management said it expects FDA decisions on two medications this year, and if these drugs get the FDA green light, Portola Pharmaceuticals plans on commercializing them soon thereafter. The company also said it hopes to get EU approval for these drugs next year.

One of these drugs is betrixaban, a factor Xa inhibitor that, if approved, could become the standard care that's used to prevent blood clots in acute, medically ill patients after they leave the hospital. The FDA isn't planning to hold an advisory committee meeting to discuss betrixaban, and while that doesn't guarantee approval, it may hint at a go ahead. A decision is expected in late June.

The second of its drugs is AndexXa, a factor Xa reversal agent. Currently, factor Xa drugs, including Xarelto and Eliquis, generate billions of dollars in sales from being used to treat atrial fibrillation and for preventing blood clots after hip and knee surgery. If it wins approval, AndexXa will become the first FDA approved medicine to reverse the effects of this class of anticoagulants. Management expects to put an application for approval in front of FDA regulators soon.

Additionally, the company said it will present interim efficacy and safety data from a phase 2 study evaluating a third drug, cerdulatinib, at two upcoming conferences. Cerdulatinib is being evaluated for use in patients with blood cancer.

There's no guarantee that either of these drugs will get an OK. Betrixaban appears to be in good shape, however, there were some questions regarding its efficacy in a subgroup of patients participating in its study. AndexXa could also get derailed. Last year, the FDA rejected AndexXa's first application for approval, requesting more insight into its manufacturing, and its efficacy in less commonly prescribed factor Xa therapies.

Furthermore, there's no guarantee that the interim data on cerdulatinib will wow industry watchers.

Nevertheless, there's reason for optimism. If these drugs win over regulators, they could establish themselves as top drugs in blockbuster indications, and that potential makes Portola Pharmaceutics shares quite intriguing.