Footwear company Crocs (NASDAQ:CROX) reported its first-quarter results before the market opened on May 10. Revenue declined a bit less than expected, and a rising gross margin led to an increase in earnings. But the company lowered its guidance for the full year, with Crocs now expecting a revenue slump. A new CEO will take the reins in June, tasked with halting a prolonged sales decline. Here's what investors need to know about Crocs' first-quarter results. 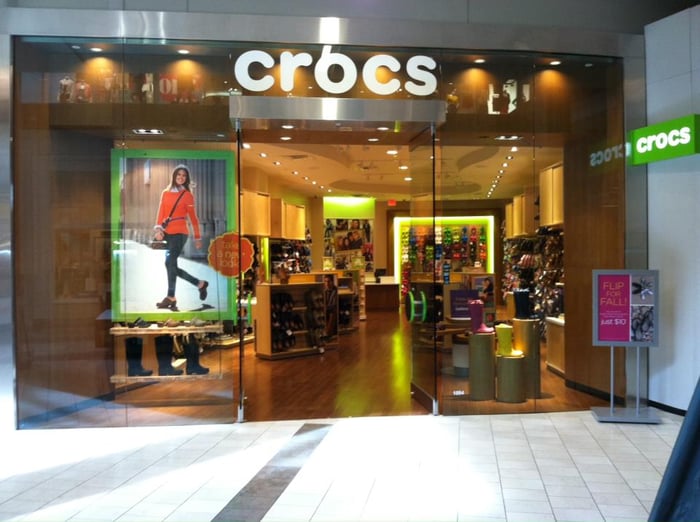 While sales slumped during the quarter, gross margin improved, boosting the bottom line.

Crocs provided the following guidance for the second quarter and the full year:

Crocs CEO Gregg Ribatt discussed the progress made during the quarter:

During the first quarter of 2017, we continued to execute against our strategic plan to strengthen the Company and brand. Customers responded favorably to our Spring/Summer 2017 product, enabling us to achieve revenues that exceeded our guidance, while simultaneously driving gross margin improvements. We are moving rapidly to implement our SG&A reduction plan, and in connection with that initiative, we closed a net 16 Company operated stores during the first quarter of 2017 and signed agreements to transfer 24 Company operated stores to distributors during the second quarter of 2017.

Revenue declines across nearly every segment and geographic region continued to haunt Crocs during the first quarter, but efforts to boost the gross margin and keep costs in check provided a lift to the bottom line. Another revenue decline is expected during the second quarter, and full-year revenue is now expected to decline as well after the company slashed its guidance.

Crocs President Andrew Reese will be promoted to president and CEO effective June 1. Reese will have the difficult task of turning the company around amid a difficult retail environment, something his predecessor has struggled to do.