British sandwich chain Pret A Manger is preparing for a U.S. IPO later this year, according to Bloomberg and other news outlets.

Private equity firm Bridgepoint, which owns the sandwich chain, seems to believe that a U.S. IPO could help it garner publicity for a stateside expansion. Fast-casual chains such as Habit Restaurants and Shake Shack saw comparable sales jump in the year they went public. Bridgepoint also sees a U.S. listing as potentially more lucrative than in the U.K., especially due to the effects of Brexit.

Rumors have also circulated that JAB Holding could be a potential buyer, preempting an IPO. Privately held JAB recently acquired Panera Bread, and has taken control of Krispy Kreme and Keurig Green Mountain in the last few years, consolidating its coffee empire. 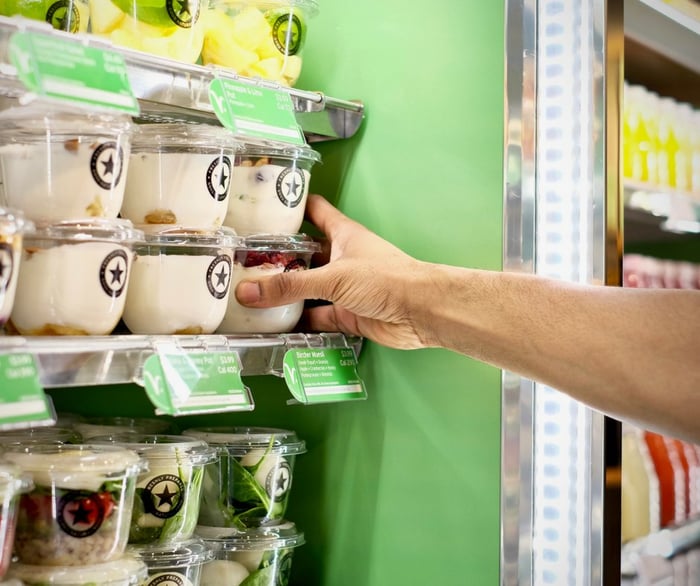 Who is Pret A Manger?

Founded in London in 1986, Pret A Manger has become a favorite among British office workers with its fare of fresh sandwiches and salads, and organic coffee. The closest American comparison for the company is probably Panera or Au Bon Pain.

It has 444 restaurants worldwide as of the end of 2016, with 327 in the U.K., 74 in the U.S., and the remainder in Hong Kong, France, China, and Dubai. Sales increased 15% last year to £776 million on a solid 4.8% growth in comparable sales, and its store count grew 11%. Unlike most fast-food chains, Pret A Manger does not franchise, allowing it to keep all of the sales and profits from its stores.

The company expects to open its 500th stores worldwide this year, and saw 14% growth in the U.S. last year, where sales topped $200 million for the first time. Management credited strong growth in breakfast, coffee sales and menu innovation.

It also opened its first Veggie Pret shop last year as it seeks to diversify and accommodate evolving customer tastes.

Pret A Manger's American restaurants are mostly located in New York with a handful in Boston, Chicago, and Washington as well. With gourmet fare and locations primarily in cities, Pret A Manger primarily targets a higher-end clientele.

Fast casual IPO's were all the rage a few years ago. Following on the coattails of one-time market darling Chipotle Mexican Grill, a number of similar chains debuted on the public markets earlier in the decade, including Noodles & Company, Potbelly, Zoe's Kitchen, El Pollo Loco, Shake Shack, and Habit Burger. But the rush for restaurant IPO's has ground to a virtual halt in the last two years as performance in the sector has been disappointing. In fact, a number of those stocks are trading below their IPO price even as the broad market has surged.

More recently, a restaurant recession has plagued the industry as lower prices in the grocery store and declining traffic at malls have caused overall comparable sales at restaurants to fall. Even coffee titan Starbucks -- which was ahead of the curve with its Mobile Order & Pay service -- has complained of the massive effect that e-commerce is having on its business, and that should only continue grow.

That all means that Pret A Manger could receive a cool reception if it goes public later this year. The brand is little known in the U.S., and plenty of fast-casual chains have promised rampant expansion in recent years only to fall flat as competition got tougher. Pret A Manger would likely need to see an opportunity for at least 1,000 or more stores in the U.S. to justify an IPO, as investors would demand ample growth from the chain.

We'll learn more when the company releases its S-1 Prospectus, if it indeed decides to go public. There, the sandwich chain will lay out its argument for its growth prospects and the value of the company. Until then, keep an eye on its fast-casual rivals. If they continue to struggle, Pret A Manger is likely to as well.