Alphabet's (NASDAQ:GOOG) (NASDAQ:GOOGL) Waymo division seems to have moved one step closer toward realizing its self-driving car dream. The company recently announced its early rider program for residents in the Phoenix metropolitan area, under which it will drive "hundreds of people" in its driverless cars to get feedback.

After spending eight years developing and fine-tuning its technology, Alphabet is now turning its attention toward the people who are going to use its driverless cars. As it turns out, Phoenix residents can use Waymo self-driving cars every day, instead of experiencing them for just one or two rides.

Therefore, Waymo wants to become the virtual driver for its early riders, setting itself up to tap a potentially huge market.

The early rider program makes it clear that Alphabet will use its self-driving car technology to partner with automakers and provide ride-sharing services, opening up a potentially fertile market for itself. Statista estimates that the global ride-sharing market will grow at almost 22% a year from 2017 to 2021, hitting a size of $70 billion at the end of the forecast period, thanks to a bump in user penetration.

Ride-sharing companies such as Uber and Lyft have already been working to automate their vehicles, and Alphabet's latest move indicates that it wants to get in on the action by partnering with Fiat Chrysler Automobiles. A year ago, Waymo and Fiat Chrysler penned a partnership to develop 100 driverless Pacifica Hybrid minivans. 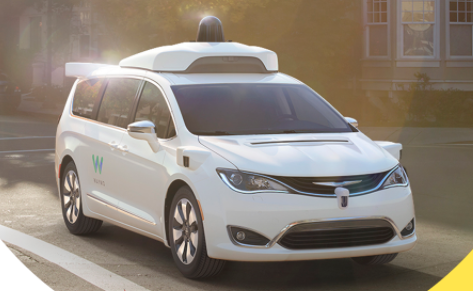 The two companies are now going to add another 500 self-driving minivans to their fleet for the early rider program, as they want to drive as many people as possible around Phoenix. Fiat Chrysler will start manufacturing the newly commissioned vehicles this month, which will then be fitted with Waymo's self-driving technology suite and deployed on Phoenix roads.

But Alphabet investors shouldn't ignore the fact that technology companies such as Uber are already trying out the ride-sharing market in Phoenix.

Can Alphabet beat the competition?

Uber has already tested a few markets with its self-driving cars, but it has consistently managed to run into trouble. For instance, one of the ride-sharing specialist's vehicles ran a red light in San Francisco in December last year, while another car in Arizona met with an accident in March when driving through a yellow light at a relatively high speed.

Additionally, Uber had brought itself bad press when it refused to comply with the California DMV's directive that to test its cars, it needed to obtain a permit and to submit detailed accident reports. Eventually, the California DMV canceled the registration of 16 Uber self-driving cars, so to test its technology the company had to move to the state of Arizona, where rules are softer.

Meanwhile, Singapore-based start-up nuTonomy, the first company to launch a self-driving taxi service, had to suspend its service for a month late last year, as in October one of its vehicles crashed into a truck due to software glitches.

On the other hand, Waymo seems to have the soundest driverless car technology at its disposal, with its cars having driven over 630,000 miles in California last year. This was far higher than second-placed Nissan's 4,099 miles. What's more, Waymo cars had a very low disengagement rate (how often a human has to grab the wheel) of 0.20 per 1,000 autonomous miles in 2016, down from 2015's disengagement rate of 0.80.

Therefore, Waymo's vehicles are now better at driving themselves, since they need much less human intervention or switching off of the autonomous mode. Moreover, the cars have been mostly tested in suburban and city driving conditions, so it is not surprising to see the company launching its early rider program on such a massive scale.

In fact, Waymo's self-driving technology has been tested on the road for 3 million miles, more than anyone else's. The launch of the new Pacifica minivans will help it extend its lead in this space over rivals whose cars haven't been as adept at driving themselves, moving Alphabet's moonshot project another step closer to monetization.