Business computing behemoth International Business Machines Corporation (NYSE:IBM) might not seem to have much in common with soft drink titan The Coca-Cola Company (NYSE:KO), but there are more similarities than you might expect.

Both companies have been around for over a century. IBM was founded in 1911,  while Coca-Cola's iconic soft drink was first unveiled in 1886. Both are dividend stalwarts, with IBM paying a dividend since 1913,  whereas Coke's payouts began in 1920. Both represent prominent holdings for Warren Buffett's Berkshire Hathaway Inc. (NYSE:BRK.B) (NYSE:BRK.A) and each is in the process of a multi-year transformation, in an effort to revive lagging revenue and reinvigorate growth. 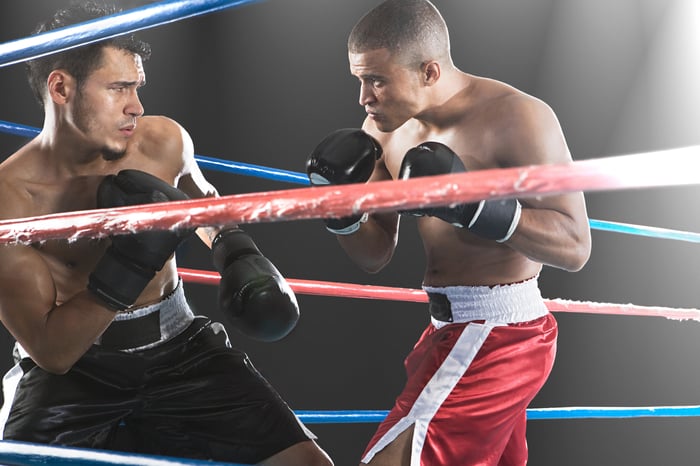 In a battle of the soft drink behemoth vs the tech titan, who will emerge victorious? Image source: Getty Images.

For investors interested in starting a position now, which is a better choice? Let's look at a variety of key measures to determine which company has a greater likelihood of success.

Two businesses at a crossroads

Both companies have been battling deteriorating revenue and earnings. With the decline in soda consumption, Coke has seen a commensurate decline in revenue and profits. Over the past five years, Coke has seen its trailing twelve month (TTM) revenue fall by 14%, while earnings per share declined 25% over the same period.

So far, to combat waning soda interest Coke has focused on smaller portions, lower calorie products, and expanding its portfolio of other beverages. Recent efforts include expanding the company's offering healthier alternatives. While the company is not providing specific revenue targets, it has spent $16 billion over the last decade on acquisitions to build out its line of healthier beverages, including Smartwater, Honest Tea, and its recently acquired AdeS, a soy-based beverage, popular in Latin America. This will gradually reduce the company's dependence on its mainstay soft drinks.

IBM has seen similar declines as it worked to reorient its gargantuan company from hardware and software to services. Over the previous five years, TTM revenue fell by over 25%, while earnings declined 11% over the same period.

To turn things around, the company has been focusing its business on the growing categories of both cloud and cognitive computing services. With its Jeopardy!-winning supercomputer Watson as a figurehead, IBM has been deploying its AI-based know-how to a variety of applications including finance, cybersecurity, and healthcare.

Looking at more recent results, IBM's TTM revenue and earnings each fell about 1%. Over the same period, Coke's TTM revenue declined nearly 6%, while its earnings plunged over 18%. 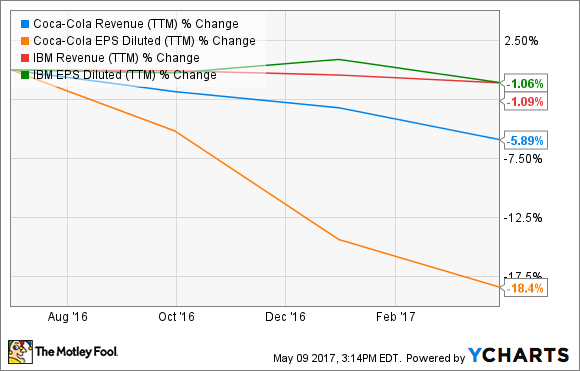 Both companies have been buying back shares over the last year. Coke reduced its total share count by 1.1%, while IBM's was a slightly higher 1.7%.

IBM has an edge over Coke when comparing yield, with the tech veteran's 3.75% yield outperforming the beverage giant's 3.26%.

The ability to fund those dividends, however, should also be taken into consideration. Coke currently has a payout ratio that exceeds 99% of earnings, which will be tough to sustain if the business turnaround doesn't materialize. The company is working to increase revenue and has a program in place to cut expenses, but only time will tell whether its efforts will succeed. IBM meanwhile sports a payout ratio just above 45%, so it has ample room to increase its dividend.

It should be noted that both companies have increased their dividend in the most recent quarter, with Coke increasing its payout by nearly 6%, while IBM increased by over 7%, showing that for the time being, both are willing to continue to raise payouts. Dividend investors want some assurance that the payouts will keep coming. In that regard, IBM offers far more security, along with the potential for long-term dividend growth.

Coke's higher multiple indicates that the market has a higher level of confidence that it will succeed in implementing its turnaround and is expecting that growth to materialize. That comes at a cost, as any perceived misstep in it's execution will take a toll on the share price. On the other hand, the market is expecting very little from IBM, so any indication of success will likely mean investors enjoy some nice gains. 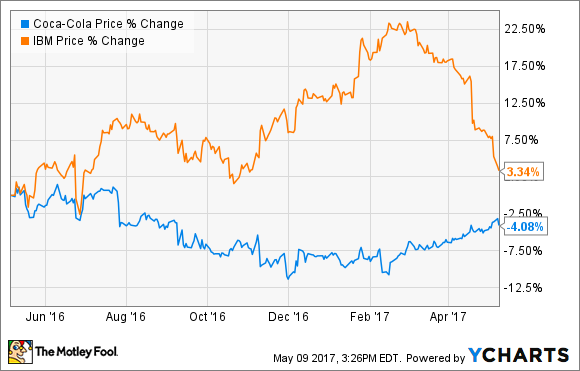 While both companies have challenges ahead, by these metrics, IBM has a clear advantage. It has done a better job recently at arresting its declining revenue and earnings and it has a much greater ability to increase its dividend. That said, investors might want to wait until they start seeing signs of a turnaround before buying big blue.