Please ensure Javascript is enabled for purposes of website accessibility
Free Article Join Over 1 Million Premium Members And Get More In-Depth Stock Guidance and Research
By Ashraf Eassa - May 12, 2017 at 9:45AM

Apple's key contract chip manufacturer has reportedly begun mass producing the heart of the next generation of iPhones.

In about four months, Apple ( AAPL 3.16% ) is expected to launch its next-generation iPhone models. Each year, the company offers customers a host of technological improvements over its prior-generation iPhone models, including improved cameras, displays, wireless capability, and last, but certainly not least, substantial improvements in the applications processor that powers the phones.

The applications processor represents the "brain" of the entire smartphone. The camera, for example, wouldn't be able to take the pictures that it does without the specialized image processor built into the chip. The speed at which applications -- which range from web browsing to 3D games -- run depends on the performance of the CPU and graphics processor in the chip. 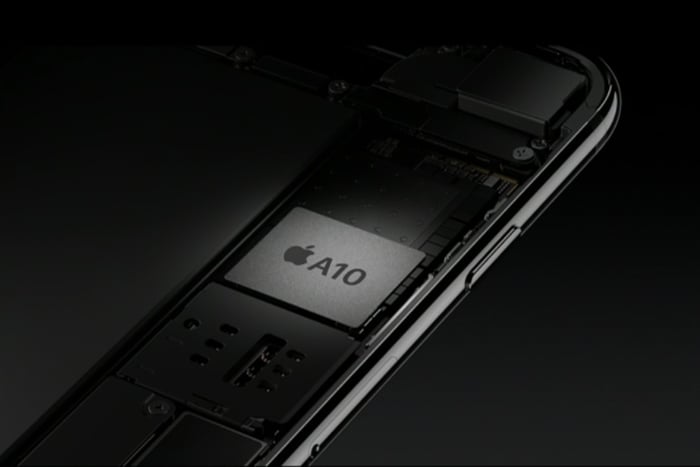 In addition to being able to perform the above tasks (and much more) quickly, the applications processor must perform these tasks efficiently since smartphones are expected to last an entire day without needing to be recharged.

According to a new report from DigiTimes, Taiwan Semiconductor Manufacturing Company ( TSM -1.79% ) has begun to mass produce the chips that will power Apple's upcoming iPhone models.

Here's what I expect

The 10nm technology also promises a boost in performance and energy efficiency.

On the CPU side of things, I expect Apple to deliver architectural enhancements to its processor cores, enabling higher performance per clock cycle. I also think that design enhancements and the move to the new 10nm technology will allow Apple to increase the clock rate of the chip. Both enhancements should add up to a solid performance gain -- I wouldn't be surprised to see a boost on the order of 30% in the A11's processor cores compared to the A10's.

I suspect the biggest enhancement that Apple will make to the A11 compared to the A10 is in the graphics processor. Graphics technology benefits greatly from the addition of more transistors, and the transistor area benefits that the 10nm technology should bring (the biggest area improvement that Apple will have enjoyed since the launch of the A8 chip in 2014) should allow Apple to include a much larger and powerful graphics block.

This should be helpful in boosting performance in cutting-edge mobile 3D gaming applications.

In addition to the standard improvements, I wouldn't be surprised to see the A11 chip build in some custom functionality in support of the 3D sensing functionality that's very likely coming to the premium OLED iPhone.

And while on the topic of cameras, while Apple was once known for its unequivocal leadership in mobile camera technology, other companies have managed to put out superior performing cameras to Apple's latest. A large part of that is probably due to the sensor technology used as well as the quality of the lens, but I suspect that Apple will also make improvements to the image processor in the A11 compared to the one in the A10 to further enhance image quality.

All told, I'm expecting great things from the A11 chip.