Please ensure Javascript is enabled for purposes of website accessibility
Log In Help Join The Motley Fool
Free Article Join Over 1 Million Premium Members And Get More In-Depth Stock Guidance and Research
By Eric Volkman – May 12, 2017 at 7:27PM

Last week's lifters are among the top names in their respective industries.

Although the current earnings season is winding down, dividend raises continue to rain onto the market. Last week, the market was practically soaked as it saw nearly 30 lifts, by my count.

And at least a few of those raises were from big, high-profile companies. Here are three of the more famous issuers bumping their payouts. Apple (AAPL -2.12%) has been an aggressive dividend raiser since resuming its quarterly payout just over five years ago. The tech giant's latest hike is an 11% bump to $0.63 per share.

The company has been fairly generous with its raises. Since the relaunch, and adjusted for a 7-for-1 stock split in 2014, the distribution has risen considerably. Adjusted for that split, it has grown from around $0.38 per share to the present level.

Apple also announced an expansion of its share repurchase program, increasing the maximum authorized amount to $210 billion from the previous $175 billion.

The two moves reflect how the company has been doing as of late. Encouragingly, it's returned to revenue and profitability growth earlier this year, following three quarters of declines. In its recently reported second quarter, it managed to increase the former by almost 5% on a year-over-year basis to nearly $53 billion. Per-share net profit advanced by 11% to $2.10.

Apple remains extremely profitable, with gross margins approaching 40%. Both cash from operations and free cash flow have seen growth recently, and the latter is more than sufficient to cover dividend payouts and share buybacks. I'd be very optimistic about the future of this dividend. 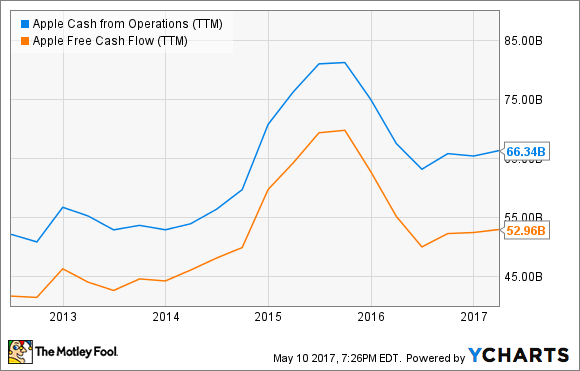 Apple's new payout will be dispensed on May 18 to stockholders of record as of May 15. At the most recent closing stock price, it would yield 1.6%. That's a touch lower than the current 1.9% average of dividend-paying stocks on the S&P 500.

The company did not provide an end date for its current share repurchase initiative.

PepsiCo (PEP -0.71%), one of the top names in the food/beverage industry, is also one of its most aristocratic. That is to say, it's high on the list of Dividend Aristocrats, the group of stocks that have raised their dividends at least once annually for a minimum of 25 years in a row.

In February, along with its Q4 and fiscal 2016 results, the company promised a 7% increase in its quarterly dividend to just under $0.81. Last week, the company made good on that promise by formally declaring the enhanced payout. 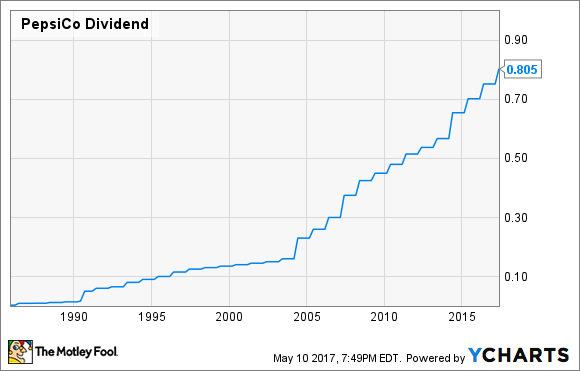 The declaration comes after a first quarter that beat analyst expectations, although it wasn't exactly a quarter for the record books. Revenue inched up less than 2% on a year-over-year basis to land at just over $12 billion. And that increase was due to increased pricing, as opposed to organic growth (volumes were either flat or down in most regions).

On a slightly more encouraging note, per-share adjusted net profit rose by almost 6% to clock in at $0.94.

Times are tough for businesses built on a core of sugary drinks (hello, Coca-Cola!) and traditional snacks, since consumers are continuing to opt for healthier alternatives. Pepsi is holding up fairly well considering, although if I were an investor, I'd prefer that the company break its recent habit of spending most, or even more, than its annual free cash flow on dividends and share buybacks.

PepsiCo's extra-fizz new distribution is to be paid on June 30 to investors of record as of June 2. It yields a theoretical 2.9%.

Storied hotel operator Marriott International (MAR 1.49%) is maintaining its one-raise-per-year habit. The company has declared a quarterly payout of $0.33 per share, a 10% increase over its predecessor.

That's to be expected, and not only because the company's a regular lifter. Its most recently reported quarterly results pleased the market, with Marriott convincingly beating expectations on both the top and bottom lines.

For the period, revenue rose by a beefy 47% to $5.56 billion, with adjusted net income also experiencing a pleasant boost (of 36%) to $395 million. The latter shook out to $1.01 per share, well exceeding the average $0.91 estimate from analysts. That top-line figure, meanwhile, was comfortably above projections of $5.29 billion.

What went right? Well, Marriott is doing a good job of squeezing more from its visitors. Revenue per available room -- a key metric in the hotel industry -- saw a 3% rise during the quarter, even as the company added roughly 17,000 rooms to its total count.

Those improved fundamentals, plus recent strategic asset sales, are keeping cash flow nice and buoyant. Free cash flow has been rising steadily and encouragingly over the past few years, and at the latest annual tally of nearly $1.4 billion, it easily covered the approximately $942 million in dividend payouts and share repurchases. I think this trend will continue, and I expect the company will continue adding to the former. 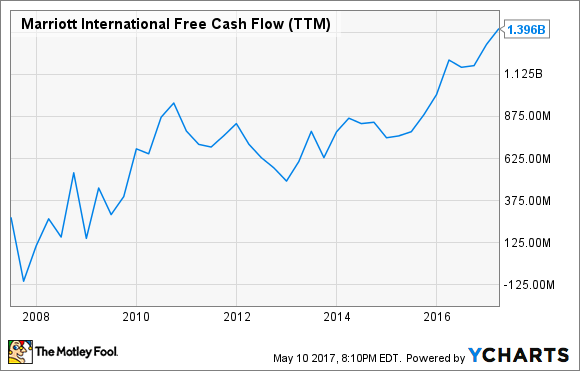 Marriott's upcoming dividend will be handed out on June 30 to shareholders of record as of May 19. It would yield 1.3% on the current stock price.