Congress has taken away a set of internet privacy protections consumers never actually had.

While it has often been reported that the public has lost something, you can't really lose something that was never yours. Instead, the Republican-led House and Senate have voted to stop rules that would have prevented content providers from selling your browsing and app history to third-party advertisers.

The Federal Communications Commission (FCC) -- at least the previous version of it under Chairman Tom Wheeler -- wanted consumers to have more control over their data. It passed a rule which gave consumers significant control over how internet service providers (ISPs) can use the data they collect from consumers. Specifically, before using that data, they would have to get explicit consumer consent. That would have given the American public protection for their browsing history.

Basically Congress has decided to toll back these rules, in favor of allowing big companies like AT&T (NYSE:T), Comcast (NASDAQ:CMCSA), Verizon (NYSE:VZ), and many others to do whatever they want with user data. 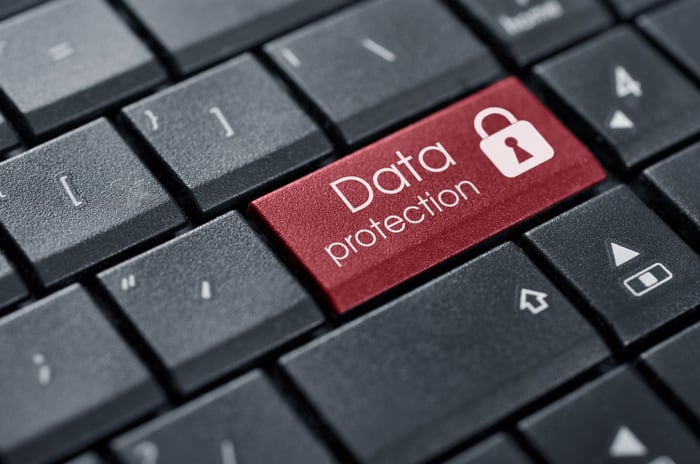 If you don't want your data sold, you will need to lock it up yourself. Image source: Getty Images.

Whether you search online for ugly Christmas sweaters, paint for your living room, or something more personal like treatments for whatever might ail you, your internet provider can share that info with advertisers. That allows companies to target ads to consumers based on their search history. Some people will actually like this because they want targeted ads touting sweaters, paint, or medicine for their chronic constipation, restless leg syndrome, or whatever else they may have.

Under the new ruling from Congress, that FCC decision has been set aside before it took effect. Now, if you don't want to share your search history, you will no longer have the option of privacy (unless you take fairly extreme technical steps to block ISPs from seeing it). That's only the tip of the iceberg for how the new legislation will allow big business to use your personal data, according to The Washington Post.

[P]roviders could also sell their users' information directly to marketers, financial firms and other companies that mine personal data -- all of whom could use the data without consumers' consent. In addition, the Federal Communications Commission, which initially drafted the protections, would be forbidden from issuing similar rules in the future.

Those who support companies like AT&T, Verizon, and Comcast having access to this data will point out that search engines have always had access to your personal search history and they use it. That's why if you search for "new cellphone plan" or "Caribbean cruise" you will get ads for those things for days (whether you are still searching for either or not).

Instead of arguing that consumers should have the right to always decide how their personal information is used, this legislation takes the opposite path. It says that because some companies have access to this info, every company should be able to access it. That does level the playing field for big business, but it comes at the expense of consumers who could in theory not use search engines or social media sites that already exploit this data, but have little choice when it comes to internet providers.

Who is this good for?

The sad thing about Congress making this ruling is that many of us would have opted into ad targeting at least some of the time. If I search for info about hotels in Orlando it may be because I'm going to Disney World and I want information about the surrounding area.

This is a big win for Comcast, AT&T, Verizon, and any other company looking to sell this information. It's also a victory for advertisers who will be able to get more for their money by aiming ads at consumers looking for what they are selling.

Some companies of course will opt to not collect or sell this sort of data. In addition some consumers will take fairly extreme steps like using a virtual private network (VPN) to encrypt their personal data on the internet. In most cases however, this legislation means the end of internet privacy and consumers should be aware that unless they make an effort to protect their data, it will be visible, sold and used.