With the bullishness of the Trump era, dividend stocks may have moved to the back seat for a lot of investors. While cyclicals and financials have been big winners, defensive, dividend-paying stocks have lagged behind.

Still, that provides a good opportunity to pick up some solid dividend stocks at relatively low prices. Dividend Aristocrats are perennial investor favorites. These are S&P 500 stocks that have hiked their payouts every year for 25 years or more. The exclusive status is a testament to their ability to generate consistent earnings growth, and a commitment to returning capital to shareholders. 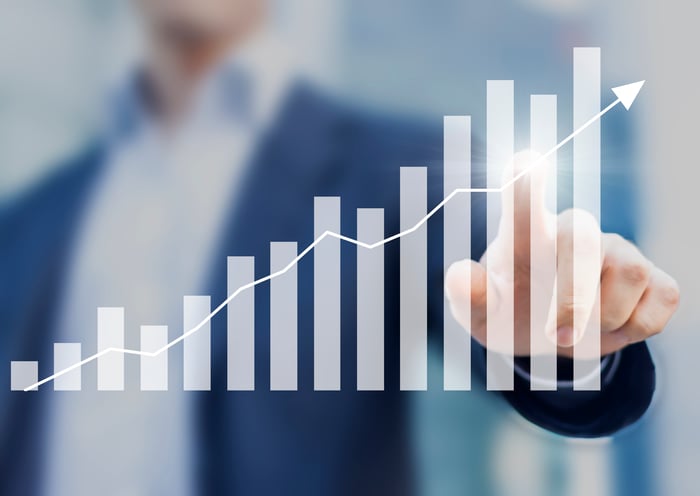 In the last few years, Wal-Mart Stores, Inc. (NYSE:WMT) has been a surprising turnaround story. The world's largest retailer was losing sales to Amazon.com and a host of other rivals, with comparable sales falling as recently as 2014. Under CEO Doug McMillon, the company has stepped up investments in wages and cleaning up stores to improve customer satisfaction, which has led to ten straight quarters of comparable sales increases.

The company has also invested in e-commerce, expanding its online grocery pickup service to hundreds of stores and purchasing Jet.com for $3.3 billion last summer and a few smaller online retailers earlier this year. While the company's shares are near a two-year high, profits have suffered due to those investments -- they have declined over the last two years, and are expected to remain flat this year.

Dividend growth has also been slow, as Wal-Mart has lifted its dividend just a penny per quarter in the last four years. However, that could change once profit growth returns, which is expected next year. Either way, Wal-Mart is stronger than it's been in years, and is leveraging its size and competitive advantages once again. While Amazon and the changing retail landscape still present a threat, Wal-Mart is quickly closing the gap.

Lowe's Companies (NYSE:LOW) has been among the best retail performers since the recession. The home improvement specialist has ridden the housing recovery, and its stock has nearly tripled in value.

Same-stores have grown consistently, and the home improvement sector is protected from e-commerce and much of the forces that threatening other parts of the retail industry. Lowe's record as a Dividend Aristocrat is also encouraging: the company has hiked its dividend payout every year for 54 years. The last time it hiked its dividend payout it raised it 25% to $0.35 a quarter last year, and the company will raise it again in the coming months.

Lowe's payout ratio, or the percentage of earnings that go to its dividend payout, remains modest at 36%, meaning the company should be able to continue raising its dividend for many more years even if earnings growth doesn't quite keep up.

But the good news for Lowe's shareholders is that the housing market remains strong and other trends such as millennials' preference for spending on home improvements also seem to favor it over the long term.  Earnings per share is set to increase 16% to $4.64 this year, auguring another meaty dividend hike.

Another home-improvement retailer worth a closer look is Sherwin-Williams (NYSE:SHW), the paint manufacturer and retailer. Founded 150 years ago, the company has been around longer than almost any other S&P 500 stock, and has grown thanks to a combination of steady organic sales growth and savvy acquisitions.

Like Lowe's, the stock has nearly tripled over the last few years as the company has benefited from the improving housing market and grown through acquisitions like Comex and Valspar, the latter of which is expected to close later this year.

In the company's most recent quarter, comparable sales jumped 7.5%, and management expects earnings per share to increase 10% for the full year.

The paint specialist has raised its dividend for 37 years in a row, and, though it only raised it by a penny last year as it may have been saving money for the Valspar acquisition, it hiked its dividend by more than 20% in the two years prior. Sherwin-Williams has a payout ratio of just 26%, but only offers a yield of 1%. Still, with the strength in the housing market and the power of a 150-year-old brand name, the stock should continue to outperform.